The latest from the frontlines in Ukraine

Russia announced Saturday that it will move to suspend its implementation of a U.N.-brokered grain deal that has seen more than 9 million tons of grain exported from Ukraine.

MOSCOW - Russia announced Saturday that it will move to suspend its implementation of a U.N.-brokered grain deal that has seen more than 9 million tons of grain exported from Ukraine during the war and has brought down soaring global food prices.

The Russian Defense Ministry cited an alleged Ukrainian drone attack against Russia’s Black Sea Fleet ships moored off the coast of occupied Crimea, which Russia says took place early Saturday, as the reason for the move. Ukraine has denied the attack, saying that the Russians mishandled their own weapons.

The Russian declaration came one day after U.N. chief Antonio Guterres urged Russia and Ukraine to renew the grain export deal. Guterres also urged other countries, mainly in the West, to expedite the removal of obstacles blocking Russian grain and fertilizer exports.

The U.N. chief said the grain deal — brokered by the United Nations and Turkey in July and which expires on Nov. 19 — helps "to cushion the suffering that this global cost-of-living crisis is inflicting on billions of people," his spokesman said.

A Guterres spokesman said U.N. officials were in touch with Russian authorities over the announced suspension.

"It is vital that all parties refrain from any action that would imperil the Black Sea Grain Initiative, which is a critical humanitarian effort that is clearly having a positive impact on access to food for millions of people," said the spokesman, Stephane Dujarric.

Russia's Foreign Ministry on Saturday accused British specialists of being involved in the alleged attack by drones on Russian ships in Crimea. 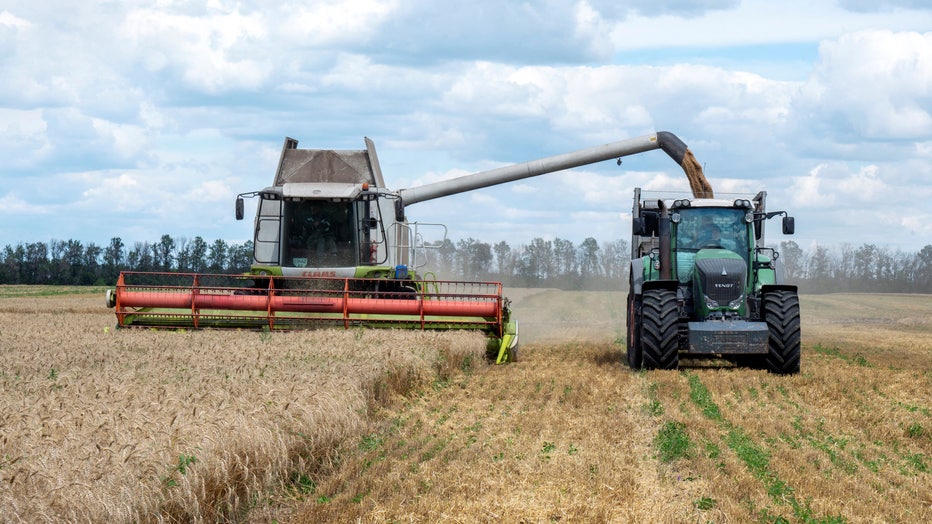 "In connection with the actions of Ukrainian armed forces, led by British specialists, directed, among other things, against Russian ships that ensure the functioning of the humanitarian corridor in question (which cannot be qualified otherwise than as a terrorist attack), the Russian side cannot guarantee the safety of civilian dry cargo ships participating in the Black Sea initiative, and suspends its implementation from today for an indefinite period,'' the Russian statement said.

"We warned about Russia’s plans to destroy the (grain agreement). Now, under false pretenses, Moscow is blocking the grain corridor that ensures food security for millions of people," he tweeted Saturday.

The head of the Ukrainian presidential office, Andriy Yermak, denounced the suspension as "primitive blackmail."

Turkish officials said they haven't received any official notice of the deal's suspension.

Russia's agriculture minister said Moscow stands ready to "fully replace Ukrainian grain and deliver supplies at affordable prices to all interested countries." In remarks carried by the state Rossiya 24 TV channel, Dmitry Patrushev said Moscow was prepared to "supply up to 500,000 tons of grain to the poorest countries free of charge in the next four months," with the help of Turkey.

Earlier Saturday, Ukraine and Russia offered differing versions on the Crimea drone attack in which at least one Russian ship suffered damage in the port on the Ukrainian peninsula annexed by Moscow in 2014.

The Russian Defense Ministry said a minesweeper had "minor damage" during an alleged pre-dawn Ukrainian attack on navy and civilian vessels docked in Sevastopol, which hosts the headquarters of Russia’s Black Sea Fleet. The ministry claimed Russian forces had "repelled" 16 attacking drones.

The governor of the Sevastopol region, Mikhail Razvozhaev, said the port saw "probably the most massive attack" by air and sea drones. He provided no evidence, saying all video from the area would be held back for security reasons. 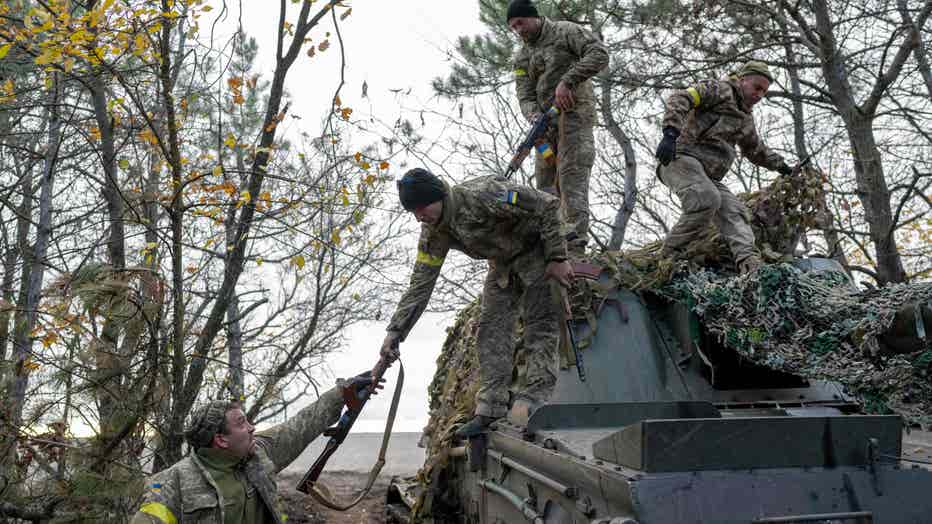 Ukrainian artillery unit members turn back to their position after fire towards Kherson on October 28, 2022, outside of Kherson region, amid Russia's military invasion on Ukraine.(Photo by BULENT KILIC/AFP via Getty Images)

But an adviser to Ukraine’s Interior Ministry claimed that "careless handling of explosives" had caused blasts on four warships in Russia’s Black Sea Fleet. Anton Gerashchenko wrote on Telegram that the vessels included a frigate, a landing ship and a ship that carried cruise missiles used in a deadly July attack on a western Ukrainian city.

In other developments on Saturday, Russian troops moved large numbers of sick and wounded comrades from hospitals in Ukraine's southern Kherson region and stripped the facilities of medical equipment, Ukrainian officials said as their forces fought to retake the province.

Kremlin-installed authorities in the mostly Russian-occupied region had previously urged civilians to leave the city of Kherson, the region's capital — and reportedly joined the tens of thousands who fled to other Russia-held areas.

"The so-called evacuation of invaders from the temporarily occupied territory of the Kherson region, including from medical institutions, continues," the General Staff of the Armed Forces of Ukraine said.

Ukrainian President Volodymyr Zelenskyy said the Russians were "dismantling the entire health care system" in Kherson and other occupied areas.

"The occupiers have decided to close medical institutions in the cities, take away equipment, ambulances. just everything," Zelenskyy said. 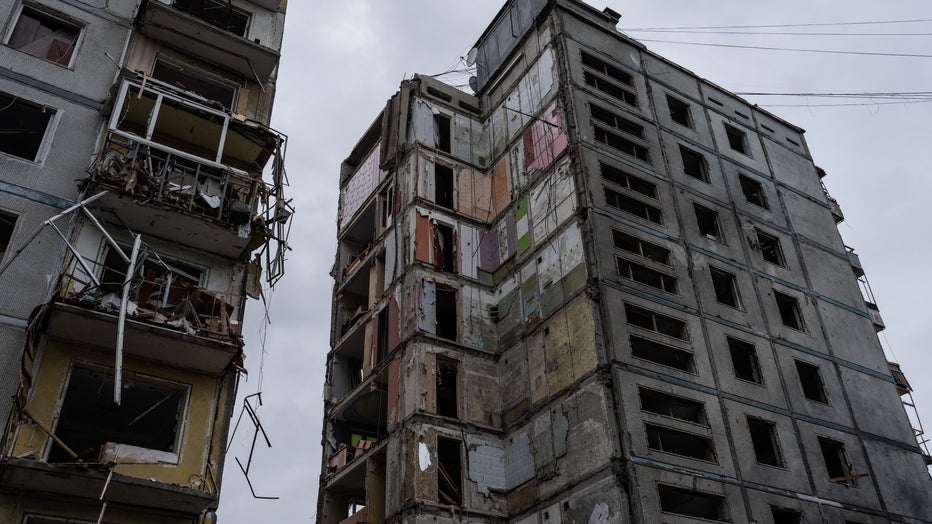 An apartment block lies in ruins after being hit by a Russian missile earlier in the month, on October 28, 2022 in Zaporizhzhia, Ukraine. (Photo by Carl Court/Getty Images)

Kherson is one of four regions in Ukraine that Russian President Vladimir Putin illegally annexed last month and where he subsequently declared martial law. The others are Donetsk, Luhansk and Zaporizhzhia.

As Kyiv's forces sought gains in the south, Russia kept up its shelling and missile attacks in the country's east, Ukrainian authorities said Saturday. Three more civilians died and eight more were wounded in the Donetsk region, which has again become a front-line hotspot as Russian soldiers try to capture the city of Bakhmut, an important target in Russia's stalled eastern offensive.

Russian shelling also an industrial building in Ukraine’s southern Zaporizhzhia region. Around a quarter of the region — including its capital, also called Zaporizhzhia — remains under Ukrainian military control.

In the latest prisoner exchange, 52 Ukrainians, including two former defenders of the Azovstal steel plant in Mariupol, were released Saturday as part of a swap with Russia, according to Yermak. The steelworks in that bombed-out port city now symbolize Ukrainian resistance.

Also released, he said, was a sailor who defended Ukraine’s Snake Island, a strategic Black Sea outpost seized by Russia in the opening hours of the war. Others coming home were Ukrainian soldiers captured by Moscow near the Chernobyl nuclear power plant — the site of the world’s worst nuclear disaster in 1986 — which Russian forces briefly occupied from February to March.