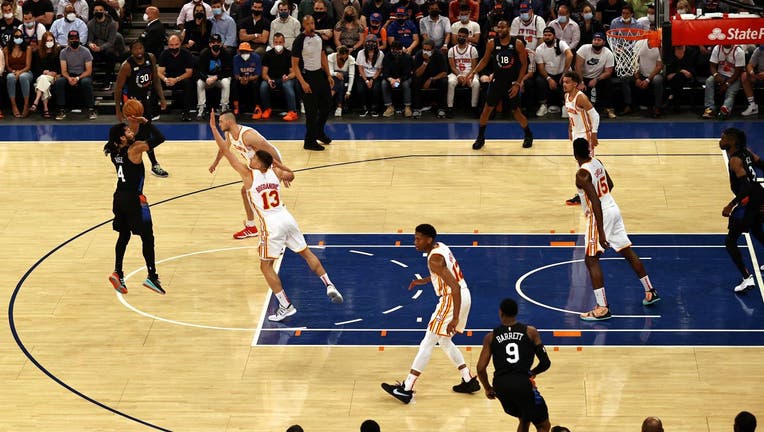 Derrick Rose #4 of the New York Knicks takes a shot as Bogdan Bogdanovic #13 of the Atlanta Hawks defends during game two of the Eastern Conference Quarterfinals at Madison Square Garden on May 26, 2021 in New York City. (Photo by Elsa/Getty Images)

NEW YORK (AP) - Derrick Rose scored 26 points, Julius Randle shook off a miserable first half to lead a third-quarter turnaround and the New York Knicks beat the Atlanta Hawks 101-92 on Wednesday night in Game 2 to tie the series.

Randle was 0 for 6 with just two points at halftime and the Knicks were staring at a 13-point deficit. But with Rose moving into the starting lineup to open the third quarter, Randle scored 11 points on 4-for-5 shooting in the period as the Knicks surged into the lead.

The winner of the NBA's Most Improved Player award finished with 15 points and 12 rebounds despite another poor shooting night. He was 5 for 16 after going 6 for 23 in the opener.

But he came through with it counted along with Reggie Bullock, who made four 3-pointers in the second half and also had 15 points as the Knicks guaranteed there will be at least one more home game in this surprising season.

Trae Young scored 30 points for Atlanta after having 32 and hitting the tiebreaking shot in Game 1. Bogdan Bogdanovic and De'Andre Hunter added 18 apiece.

Game 3 is Friday night in Atlanta, where the Hawks will be allowed to welcome a full capacity crowd for the first time

Rose made the basket the gave the Knicks the lead for good at 93-91 with 4:45 to play and played 39 minutes as coach Tom Thibodeau stuck with one of his most trusted players to keep the series — and maybe season — from slipping away.

Young made the tiebreaking basket with 0.9 seconds left in Game 1 and stamped himself as a villain figure for Knicks figures by holding his finger to his lip afterward to tell them to quiet down.

The profane chants that were aimed at Young in Game 1 started before the Hawks were even on the court for warmups and he was loudly booed every time he touched the ball early on.

His backcourt mate was the Knicks' bigger problem for a while. Bogdanovic scored eight straight Atlanta points midway through the second quarter to extend the lead to 43-37.

Then Young got hot from inside and outside — way outside. He pulled up from 30 feet for a 3-pointer, made a reverse layup, a jumper and another 3-pointer in a 12-1 run that made it 57-42 in the final minute of the half.

New York started Rose and Taj Gibson in the second half and Randle opened it with a 3-pointer for his first basket. RJ Barrett and Rose made back-to-back 3s to trim it to 61-55.

Atlanta seemed to have recovered and pushed it back to 12 midway through the period. Then Randle helped power a 16-2 spurt for the Knicks by picking up his aggression after playing passively, and his jumper after consecutive 3-pointers by Bullock capped the surge and made it 74-72 with 1:45 left in the period.

Thibodeau kept his normal starting lineup, even though he had pulled struggling point guard Elfrid Payton after about four minutes in each half in Game 1 and never reinserted him either time.

Payton lasted just over five minutes this time before the Knicks called time after Atlanta's 11-0 run and inserted Rose. Meanwhile, Randle had two airballs in his first three shot attempts.

Hawks: Game 3 will be the first playoff game at State Farm Arena since its renovation in 2018. It hosted this season's All-Star Game. ... Capela had 12 rebounds.

Knicks: Randle was presented his Most Improved Player award that he won in a runaway Tuesday. ... Thibodeau said starting center Mitchell Robinson is still "several steps away" from returning from a broken right foot sustained March 27. He said Robinson is making steady progress but the Knicks wouldn't take any chances. "He’s got to go step by step and so he’s doing a little bit but not much," Thibodeau said. "The first step is he can do some individual stuff, then he has to cleared for team practices. So we’re going to be patient and let him go through the process."

Rose was asked about the interaction between Young and the Madison Square Garden crowd in Game 1 and recalled that being business as usual.

"The league got so soft, but that’s basketball," Rose said. "He came in, he played a great game and the crowd’s supposed to do that. His reaction's supposed to be that way and it’s supposed to amp up and bring the atmosphere and the environment to where it is right now. I mean that’s what I’m used to.

"I’ve been in series where drinks were thrown on parents, like people’s moms. Like, you’re on the court and you seen your mom getting beer splashed on her. That’s the environment I’m used to and now it’s a little different."