About 116 acres of vacant oceanfront land in Far Rockaway, Queens, will be developed into a so-called net-zero community featuring housing, community centers, a nature preserve, retail space and much more.

NEW YORK - A part of the Rockaway Peninsula in Queens is under construction. About 116 acres of vacant oceanfront land is being developed into housing, community centers, a nature preserve, retail space, and much more between Beach 32nd Street to Beach 56th Street.

"This being the first net-zero community in New York City, this is historic," Queens Borough President Donovan Richards said.

L+M Development Partners, which is leading the project with the Bluestone Organization and Triangle Equities, is working with community leaders, according to the company.

The energy-efficient storm-resilient project will cost roughly $1 billion. The 35-acre nature preserve, which will be managed by the New York City Parks Department, is currently under construction.

In a neighborhood that lacks housing, community centers, and supermarkets, residents say this project will revitalize the Arverne and Edgemere neighborhoods of the Rockaways.

The site, named Arverne East, will have more than 1,600 units of housing, 80% of it affordable, with about 200 units going to those formerly homeless.

"Your socioeconomic status should not be a determinant on whether you have ocean views," Richards said, adding that the project will be gentrified-proof — meaning residents will not be pushed out of their neighborhood.

"We're also entertaining something called a community land trust here because we know as communities get developed, especially waterfront communities, that individuals can get pushed out," Richards said. "So ensuring that our local residents could have land that they determine what happens on, it is also going to be mutually beneficial in ensuring that we what I call 'gentrify-proof' this land." 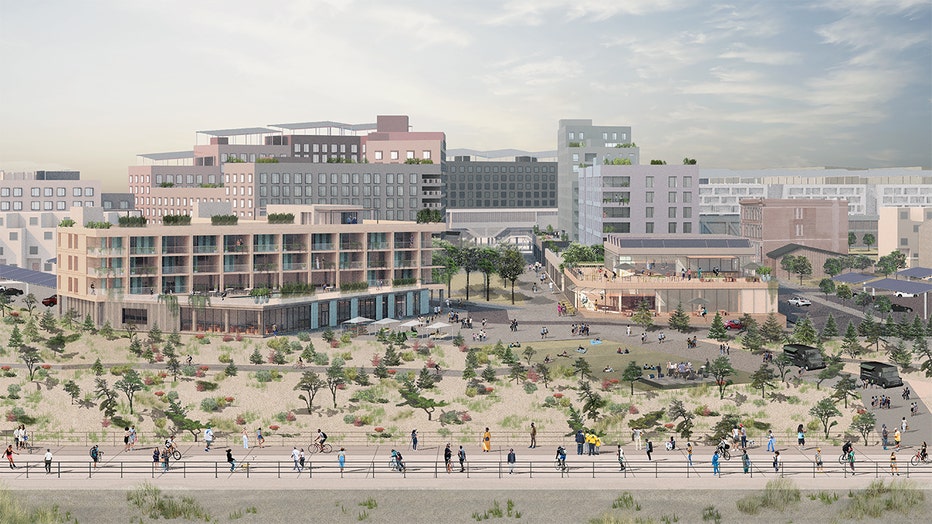 A rendering of the Arverne East development on the Rockaway Peninsula in Queens. (Courtesy of Local Office Landscape/Bernheimer Architecture)