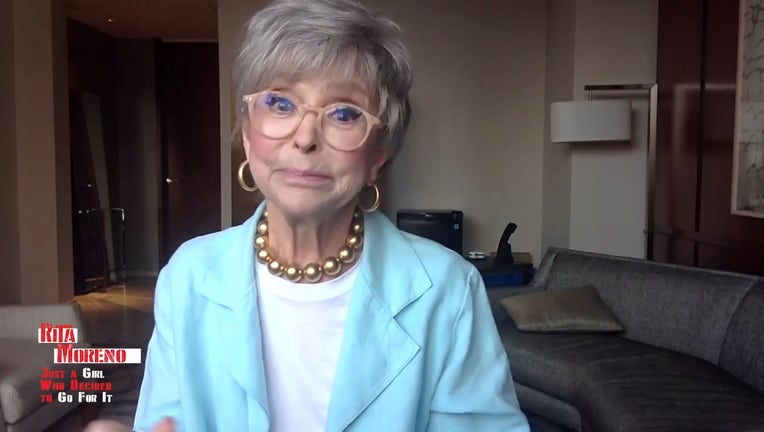 Rita Moreno reminisced on the night she won an Oscar for her supporting performance in West Side Story (1961). This was the moment she knew she was a name worth knowing. The adrenaline of hearing her name declared the winner can be seen in her beaming eyes as she marched to claim her award – an accumulation of a decade’s worth of hard work finally paying off.

Then her reflection shifts.

"It took a while," the soon-to-be 90-year-old actress said about achieving recognition. "I had been in Hollywood for a very, very long time and struggling as most Hispanic actors did then and by the way still are."

"We are not represented as much as we need to be so I have a bone to pick with the Hollywood contingent," Moreno added. "I think we need to do better than we have. The Black community has done fabulously well and maybe we can learn a few lessons from them."

Born in Humacao, Puerto Rico, the actor of a select group of performers to have won an Oscar, an Emmy, a Tony and a Grammy. She made her acting debut as a 20-year-old in the dated So Young, So Bad (1950) and worked mainly as a television actor for over 10 years before landing her landmark role as Anita.

These days Moreno is doing press for the upcoming documentary Rita Moreno: Just a Girl Who Decided to Go for It which focuses on her early life and career. She is also set to appear in the upcoming Steven Spielberg-directed remake of West Side Story.

Racism played a role in Moreno’s life even before she began acting. Even as a child she endured vulgar name-calling that will not be typed in this article.

"What happened to me is that I ran into a lot of racial bias. And when you’re a little child you accept it. You just think, well, I guess I’m not good. And you never question why."

Her mental health suffered from the abuse to the point she sought help through psychotherapy – or "talk therapy" – a move she says is "the best thing she ever did," for herself.

"… it took years for me to understand that I have worth and that I have value. When you’re little and you accept those kind of characterizations, you’re in trouble."

Moreno’s comments come at a time where Hollywood’s age-old problem of diversity, or the lack thereof, is yet again a topic of discourse following the release of HBO’s In the Heights (2021). In the Heights is a story set in predominantly Hispanic neighborhood with a considerable Afro-Latino population in Washington Heights of New York City. The film’s lack of significant Afro-Latinx representation has led to online criticism for failing to accurately portray the titular neighborhood. Recent comments by director Jon M. Chu and the cast in an interview with The Root have not helped stem the tide in this regard.

Leslie Grace, who plays Nina in the film, is the only Afro-Latina among the principal cast that’s otherwise composed of white-passing and lighter-skinned Latinx people. In the same interview, Grace expressed her disappointment with the lack of diversity in the film.

"I didn’t realize until making this movie that I didn’t really get to see myself or people that look like my siblings that are darker than me onscreen," said Grace.

Producer Lin-Manuel Miranda recently responded to the criticism in a tweet, apologizing for the underrepresentation.

The issue has always been bigger than just one film. According to UCLA’s Hollywood Diversity Report, even though there was small progress in increasing cast diversity among productions, the same could not be said for essential behind-the-scene jobs. Minority groups combined only made up 25.4% of directors and 25.9 of film writers were people of color. The problem gets worse the bigger the budget of the production.

The same report notes that minorities had a substantial impact on the box office in 2020. Of the top 10 grossing films that year, minorities made up more than half of domestic ticket sales on opening weekend for six of them.

Then there’s the money left on the table. A study by the Center for Scholars & Storytellers based out of UCLA revealed films that were not authentically inclusive with their overall diversity (in front of and behind the camera) often lost out on box office earnings. For example, a $159m budgeted film was approximated to lose $32.2M at the opening weekend box office, with the potential to lose an overall $130m. That’s 82% of its budget.

These are just numbers though. Behind the stats are real people like Moreno who have had to deal with the trauma of systemic racism their entire lives.

"A child doesn’t know," said Moreno. "They just believe it… and it takes years to get rid of that feeling [of] self-loathing."