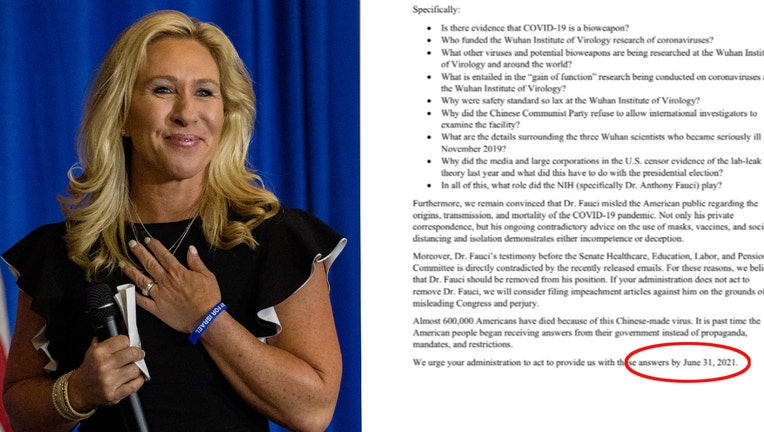 This composite image shows Rep. Greene on the left and the letter she says she sent to President Biden on the right. (Getty and handout)

NEW YORK - Georgia Rep. Marjorie Taylor Greene says she has sent a letter to President Biden about the "manufactured" coronavirus and warning she will consider filing "impeachment articles" against Dr. Anthony Fauci.

She is one of several Republicans who have seized on statements Dr. Anthony Facui made in some of his emails from the early days of the pandemic.

Specifically, they want to know why he didn't more aggressively pursue the theory that coronavirus could have leaked from the Wuhan Institute of Virology in China.

The freshman congresswoman, who has been condemned by the Republican party for comparing House safety rules like mask-wearing to the treatment of Jews in Nazi Germany, tweeted a copy of the letter on June 4, 2021.

She said:  "The American people deserve answers on the Wuhan lab & Fauci deserves to be held accountable!"

Two days later, Greene tweeted a new copy of the letter with a corrected date of June 30, 2021.

She stated, "I’m thankful to the members of the press that caught the typo in my letter."

Greene, a conservative firebrand and ally of former President Donald Trump, has thrived on stirring controversy, pushing conspiracy theories, and forcefully confronting her colleagues since taking her seat in the House in January.

Fauci, director of the U.S. National Institute of Allergy and Infectious Diseases, would not be the person responsible for an investigation concerning the lab theory.