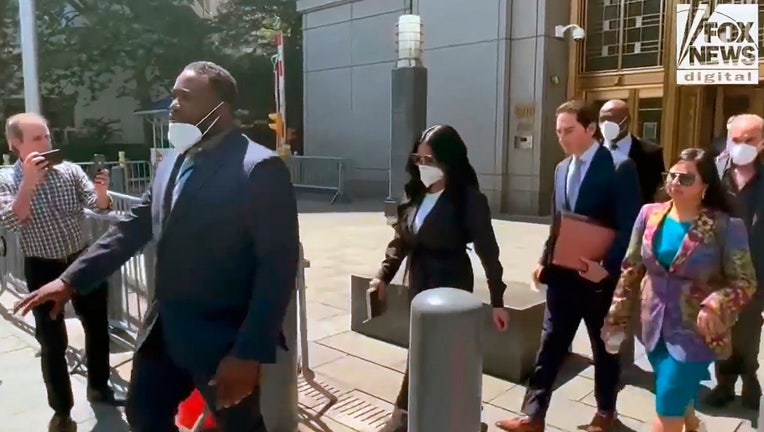 Jen Shah walks out of court after pleading guilty to one charge of conspiracy to commit wire fraud in connection with telemarketing. (Credit: Griffin Frank/Fox News)

"These victims were sold false promises of financial security but instead Shah and her co-conspirators defrauded them out of their savings and left them with nothing to show for it," the statement continued. "This Office is committed to rooting out these schemes whatever form they take."

The reality TV star appeared at the Daniel Patrick Moynihan Courthouse around 10:30 a.m. EST on Monday.

Shah's plea deal came with a sentencing guideline, according to Courthouse News. The reality TV star can be sentenced to prison for anywhere from 135 to 168 months, or 11 to 14 years.

Her sentencing hearing is scheduled for Nov. 28.

The Bravo star originally insisted she had not taken a plea deal because she was "innocent."

"I’m fighting this. I am innocent," she told host Andy Cohen and her castmates after Cohen pointed out the "success rate" of the New York State Attorney during the most recent "Real Housewives" reunion.

"And I will fight for every person out there that can’t fight for themselves because they don’t have the resources or the means, so they don’t fight."

Shah was arrested in March 2021 amidst filming the Bravo reality show. The federal charges included conspiring to commit wire fraud and money laundering. The government alleges that she was involved in a nationwide telemarketing scheme that defrauded hundreds of victims.

Some co-conspirators in the case, including Shah's longtime assistant Stuart Smith, have already pleaded guilty and are awaiting sentencing.

Shah and Smith tried to hide their role in the fraud by using third-party names for their business entities, telling victims to use encrypted messages to communicate with them and instructing people to send some payments to offshore bank accounts, the indictment said.

The pair "generated and sold ‘lead lists’ of innocent individuals for other members of their scheme to repeatedly scam," prosecutors said.

"In actual reality and as alleged, the so-called business opportunities pushed on the victims by Shah, Smith and their co-conspirators were just fraudulent schemes, motivated by greed, to steal victims’ money."