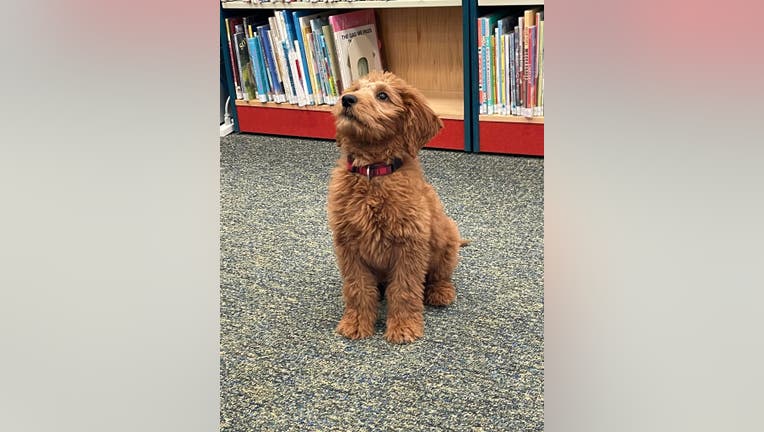 The local police department recently announced its newest recruit, a 13-week-old Goldendoodle named Officer Raymond L. Hopkinton, who will serve as a compassion canine for the community.

Raymond, who has already melted hearts in the southwestern Rhode Island town, will provide officer wellness and victim support. Officials said they hope the program can help develop a bridge between the police department and the community it serves.

Raymond will soon embark on a year-long training process to become a certified compassion canine.

"The name fits the sitcom ‘Everybody Loves Raymond’ because you come in contact with him, and he changes your mood immediately," Hopkinton Police Chief David Palmer told FOX Television Stations.

Palmer said the department chose a Goldendoodle "because of their temperament and that they are hypoallergenic."

Research on human-animal interactions has shown positive health benefits, including a decrease in cortisol levels — the hormone that causes stress — as well as lowering blood pressure, according to the National Institutes of Health. Some studies have found that animals can reduce loneliness, increase feelings of social support, and boost a person’s mood, the NIH says.

"We jumped at the opportunity to bring the officers closer to the community," Palmer recalled, noting that there are several other police departments throughout the state that also have compassion dogs.

Since making his debut last week, the police department has shared photos from some of the events Raymond has already attended — including a toy drive and "Breakfast with Santa" event at a local fire department.

The police department received a "very generous donation" to kickstart the program, but Officer Raymond and all of his expenses are paid for solely through donations, Palmer said.

"Ray Quinlan and Lydia Tiexeira, who own Hopkinton Industrial Park, provided a very generous donation that got the program rolling; hence the name Raymond L," he explained.

In an effort to build the program’s funding and maintain the program long-term, a GoFundMe page was also created by the police union IBPO Local 498.

Palmer said Raymond will visit elementary schools soon and all of his adventures will be shared on his own Facebook page Officer Raymond - HPD.