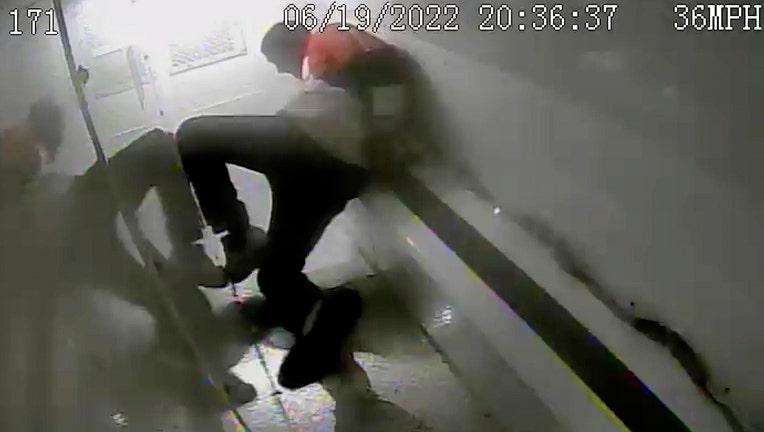 In this photo taken from surveillance video, Richard Cox slides down the back of a police van while being transported after being detained by New Haven Police, June 19, 2022, in New Haven, Conn. Officials in Connecticut said, Wednesday, June 22, 2022

CONNECTICUT - Prominent civil rights attorney Ben Crump said Tuesday he will lead the legal fight on behalf of Randy Cox, a Black man who was seriously injured in the back of a police van in Connecticut when the driver braked suddenly.

Crump also called for a federal civil rights investigation into the treatment of Cox, 36, who was being taken June 19 to a police station in New Haven, Connecticut, for processing on a weapons charge when his head struck the back wall of the van.

Crump said police mocked Cox's cries for help and later dragged him by his feet from the van and placed him in a holding cell before he was taken to a hospital. Cox, whose legal first name is Richard, is in intensive care, paralyzed from the chest down, Crump said.

At a news conference Tuesday in front of New Haven Superior Court, Crump, who has been called Black America’s attorney general for his work on civil rights cases, led a crowd in chants of "Justice for Randy Cox."

His co-counsel, Jack O'Donnell, said the legal team expects to file a federal lawsuit within 60 days, once it has reviewed all the evidence, including more than two hours of video.

Some of that, including footage from a camera that recorded the moments when Cox was injured, has been released publicly.

"I am here because when I looked at that video, it shocked my conscience," Crump said. "And I believe when you all see that video, it's going to shock your conscience. The only question is, why, when the police look at Randy Cox saying, ‘I can’t move,' why doesn't it shock their conscience?"

Five members of the New Haven police department have been put on leave while the episode is investigated.

Cox was handcuffed when he was in the back of the New Haven police van, which was not equipped with seat belts. He flew headfirst into a wall when Officer Oscar Diaz braked hard; he said it was to avoid a collision, police said.

Diaz resumed driving to the police department, despite Cox calling for help and saying he was injured and couldn’t move, according to the video and officials. A few minutes later, Diaz stopped the van to check on Cox, who was lying motionless on the floor.

Diaz then called paramedics but told them to meet him at the station instead of waiting for them where he was, police said. 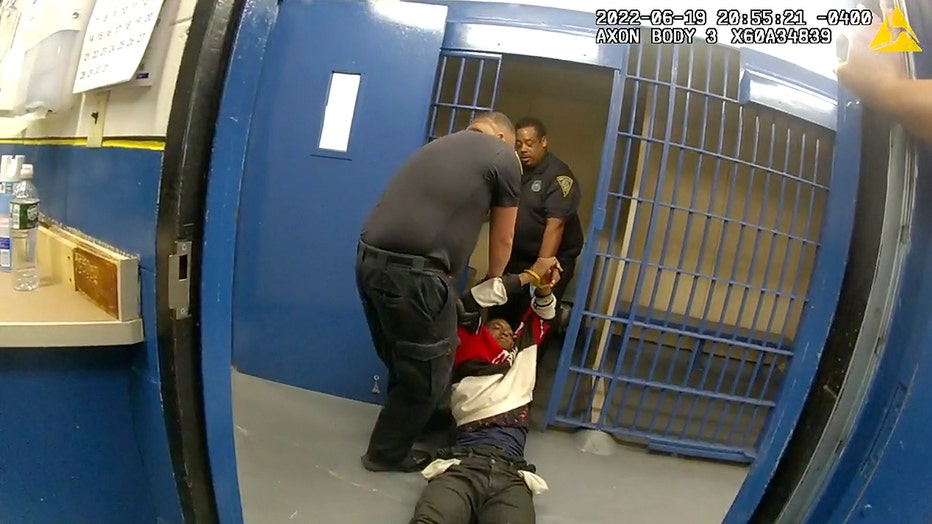 In this frame taken from police body camera video, Richard Cox, center, is dragged into a cell after being pulled from the back of a police van after being detained by New Haven Police, June 19, 2022, in New Haven, Conn. Officials in Connecticut said

At the station, officers dragged Cox out of the van by his feet and put him in a wheelchair, video shows. Police then booked Cox, took him out of the wheelchair and dragged him into a cell, where he was left on the floor, video shows.

Crump said Cox was accused of lying and told to get up several times by police.

Scot Esdaile, the president of the Connecticut branch of the NAACP, said he is not convinced the hard braking of the van was an accident.

New Haven Mayor Justin said last week that prisoner transport vans not equipped with seatbelts have been taken out of service and that the police department is working to install seatbelts in them.