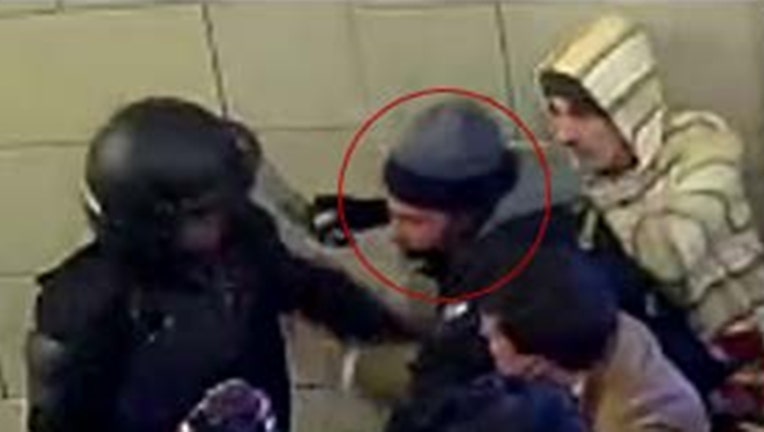 The FBI identified the man in the red circle as Philip Grillo of Queens, N.Y. (Via U.S. Justice Department)

NEW YORK - Federal authorities have charged a Republican district leader from New York City in connection with breaching the U.S. Capitol on Jan. 6.

FBI agents arrested Philip Grillo, 46, on Monday at his girlfriend's home in Glen Oaks, Queens, according to a law enforcement source. He lives in the same neighborhood.

The Queens County GOP website lists Grillo as a district leader for the 24th Assembly District. He refers to himself as "The Republican Messiah" on his Facebook page.

Federal authorities reportedly identified Grillo after receiving tips from people who recognized him from several images from the mayhem at the Capitol. At least one image shows a man wearing a distinctive Knights of Columbus jacket embroidered with "St. Anne's Council #2429, Glen Oaks, New York," which helped the FBI track him down, the source said.

Several security officials testified before lawmakers in Congress about the Jan. 6 insurrection at the U.S. Capitol.

The New York Post reported that Grillo is a member of the Catholic fraternal organization.

Investigators have security video showing Grillo climbing through a broken window "holding a megaphone in his hand," according to court papers.

Grillo appeared remotely before a magistrate judge in Brooklyn federal court on Tuesday afternoon. The magistrate released him on a $100,000 bond.

An attorney from Brooklyn Federal Defenders is representing him, according to the U.S. Attorney's office. The AP left a message with the attorney.