A New York man pleaded guilty Wednesday to storming the U.S. Capitol with fellow members of the far-right Proud Boys, a milestone in the Justice Department's prosecution of extremists who joined the Jan. 6 insurrection.

Matthew Greene is the first Proud Boys member to publicly plead guilty to conspiring with other members to stop Congress from certifying the Electoral College vote. He will also cooperate with authorities under the terms of his plea agreement.

Greene was arrested in April after a grand jury indicted him in the same case as two other alleged Proud Boys, Dominic Pezzola and William Pepe. They have pleaded not guilty.

Greene traveled from Syracuse, New York, to Washington, D.C., with Pezzola and other Proud Boys on Jan. 5. Prosecutors allege Greene advanced past toppled police barricades and was at the front of a mob when police began using pepper spray and other crowd-control measures. But prosecutors have said they don't have any evidence that Greene entered the Capitol building that day.

"After the riot, (Greene) engaged in conversations (on) encrypted messaging platforms admitting to his role in the riot, encouraging others not to give up in a fight to take back their country, and comparing the situation as it existed in the weeks following January 6 to a fourth-generation war," prosecutors wrote in a June court filing.

More than three dozen people charged in the Capitol siege have been identified by federal authorities as Proud Boys leaders, members or associates, including at least 16 defendants charged with conspiracy. In a key case, four group leaders were charged in March with conspiring to impede Congress’ certification of President Joe Biden's electoral victory.

Greene is expected to face a maximum of just over four years in prison at a sentencing set for March, and pay a fine of $15,000 to $150,000, along with about $2,000 in restitution. He pleaded guilty to federal charges of conspiracy and obstruction of an official proceeding.

Other extremist group members have been charged with conspiring to carry out a coordinated attack on the Capitol, including more than 20 people linked to the anti-government Oath Keepers.

Graydon Young, 55, of Englewood, Florida, was the first defendant to plead guilty in the Justice Department's major conspiracy case against Oath Keepers members. At least four others linked to the Oath Keepers also have pleaded guilty to riot-related charges. 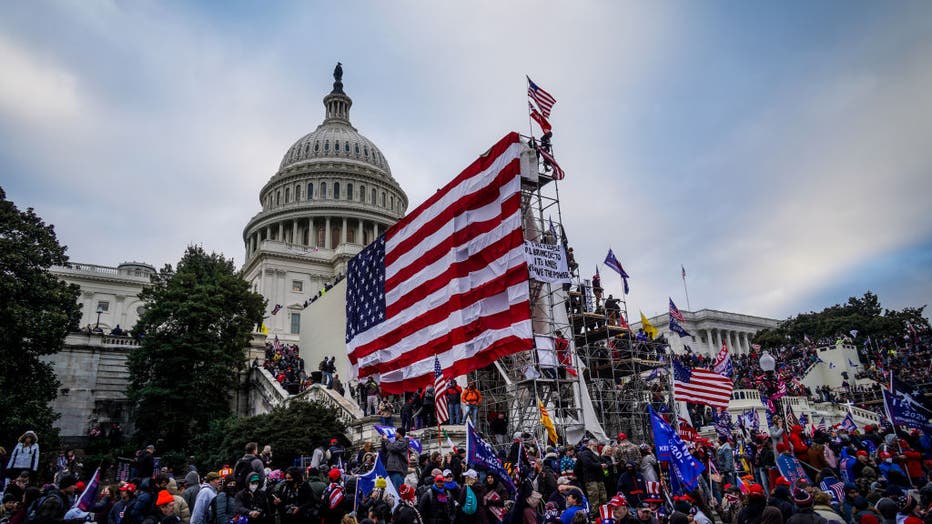 Trump supporters near the US Capitol following a "Stop the Steal" rally on Jan. 6, 2021 in Washington, DC. (Photo by Selcuk Acar/NurPhoto via Getty Images)

Proud Boys members describe themselves as a politically incorrect men’s club for "Western chauvinists." Its members frequently have engaged in street fights with antifascist activists at rallies and protests. Vice Media co-founder Gavin McInnes, who founded the Proud Boys in 2016, sued the Southern Poverty Law Center for labeling it as a hate group.

Police arrested the Proud Boys’ top leader, Enrique Tarrio, in Washington two days before the Capitol riot and charged him with vandalizing a Black Lives Matter banner at a historic Black church during a protest in December 2020. Tarrio, who is serving his jail sentence for that case in the District of Columbia, hasn’t been charged in connection with the Capitol siege.

On the morning of Jan. 6, Proud Boys members met at the Washington Monument and marched to the Capitol before President Donald Trump finished addressing thousands of supporters near the White House.

Around two hours later, just before Congress convened a joint session to certify the election results, a group of Proud Boys followed a crowd of people who breached barriers at a pedestrian entrance to the Capitol grounds, according to one of the indictments. Several Proud Boys also entered the Capitol itself after the mob smashed windows and forced open doors, the indictment says.

Greene was wearing an earpiece connected to a handheld radio, according to prosecutors. They said the Proud Boys arranged for members to communicate using specific frequencies on Baofeng radios. The Chinese-made devices can be programmed for use on hundreds of frequencies, making them difficult for outsiders to eavesdrop.

Prosecutors said in June that Greene, who served in the Army National Guard, "was willing to put lessons learned in that military service to use" against the U.S. They noted that Greene had a pistol and an unregistered AR-15 rifle in his home and that he had ordered over 2,000 rounds of ammunition and a gas mask after Jan. 6.

"He encouraged an associate to read up on guerrilla warfare and to use the tactics used by the Taliban and to ‘be prepared to do uncomfortable things,’" prosecutors wrote.

Defense attorney Michael Kasmarek said in June that Greene, then 34, was a partner in a multimillion-dollar digital graphic design company. Greene had a "very limited" association with the Proud Boys before Jan. 6 and didn’t have a leadership role in the group, Kasmarek said.

Greene "has concluded that his personal beliefs and ethics do not align with those of the Proud Boys," and he is "anxious to publicly disavow his brief membership in this group," his lawyer wrote.

More than 700 people have been charged with federal crimes related to the riot. Over 150 of them have pleaded guilty, including at least two other defendants with Proud Boys ties.

Andrew Bennett, a Maryland man whom prosecutors described as a Proud Boys "admirer" but not a group member, pleaded guilty to a misdemeanor offense and was sentenced in October to three months of home detention.

Micajah Jackson, an Arizona man who also pleaded guilty to a misdemeanor, was photographed walking toward the Capitol on Jan. 6 with a group of Proud Boys. However, Jackson told the FBI that he isn’t affiliated with the group and doesn’t support its ideology.