Protests erupt across the country

NEW YORK - Protesters angry over the death of George Floyd in Minneapolis police custody turned out for a demonstration in Columbus that began peacefully but turned violent, with windows smashed at the Ohio Statehouse and storefronts along surrounding downtown streets.

The crowd of around 400 people entered into a standoff with Columbus police Thursday night, blocking the intersection of key streets in the Ohio capital for hours, the Columbus Dispatch reported.

The demonstration began as a peaceful protest, but news outlets reported protesters began throwing objects like water bottles at officers, who responded by using tear gas on the crowd. A scuffle between a protester and an officer broke out around 9:45 p.m., WCMH-TV reported. 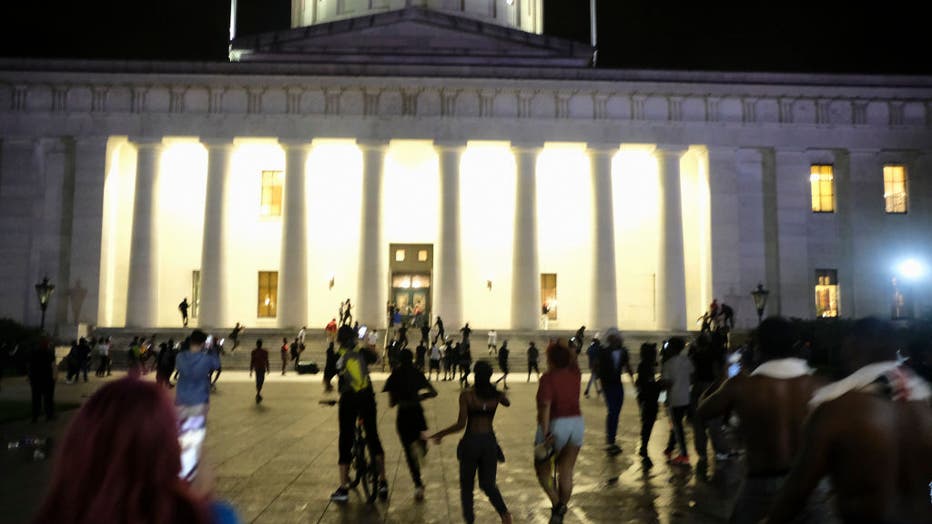 COLUMBUS, OH - MAY 28: After a brief skirmish with officers which resulted in rubber bullets and pepper spray being deployed, protesters flock towards the Ohio Statehouse where windows were smashed out and at least two men were detained. (Photo by Ma

Videos obtained by The Associated Press show people smashing the building’s windows. One person briefly entered an office through a broken window but retreated before troopers within the building could catch him, said Ohio State Highway Patrol spokesman Lt. Craig Cvetan.

Windows were boarded up early Friday and workers were placing plywood over undamaged windows out of precaution.

PHOENIX — Hundreds rallied in downtown Phoenix to demonstrate against the death of George Floyd in Minneapolis police custody a protest that turned into a clash with police.

Protesters who marched from Phoenix City Hall to the state Capitol on Thursday night into Friday morning carried signs reading, “Silence is violence” and “Being black should not be a death sentence,” The Arizona Republic reported.

The newspaper reported that rocks and water bottles were thrown at police. Video from local broadcast stations shows protesters hammering on the window of a police car, and the newspaper reported at least one police car window was broken. The Arizona Department of Public Safety and Phoenix police responded by firing pepper spray and rubber bullets at the crowd. 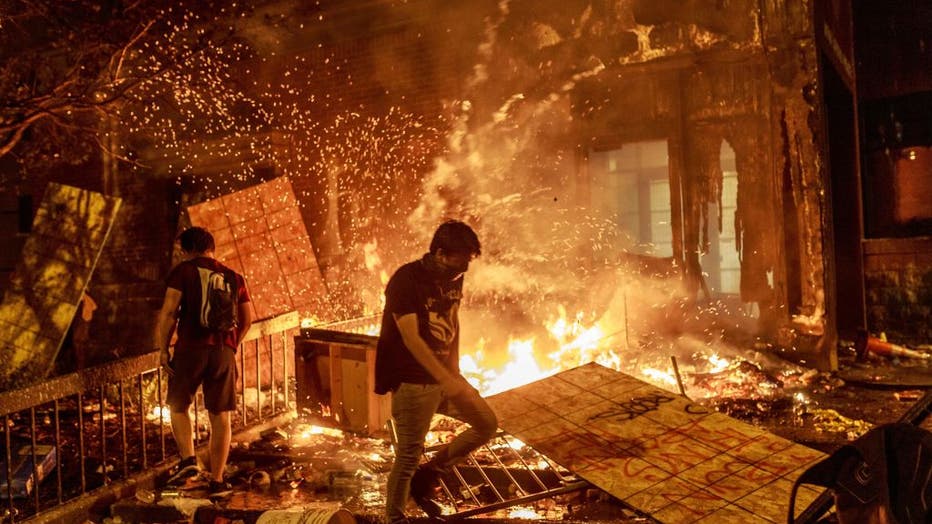 TOPSHOT - A police precinct in Minnesota went up in flames late on May 28 in a third day of demonstrations as the so-called Twin Cities of Minneapolis and St. Paul seethed over the shocking police killing of a handcuffed black man. (Photo by KEREM YU

PETAL, Mississippi — A Mississippi mayor whose remarks about the death of George Floyd in Minneapolis police custody sparked outrage is resisting calls to resign, including from his own town’s board of aldermen.

“Why in the world would anyone choose to become a police officer in our society today?” Petal Mayor Hal Marx tweeted Tuesday, the day four Minneapolis police officers were fired. The 46-year-old Floyd, a black man, was handcuffed and pleading for air as a white police officer kneeled on his neck Monday.

In a follow-up tweet, the Republican directly referenced the Floyd case, saying he “didn’t see anything unreasonable”: “If you can say you can’t breathe, you’re breathing. Most likely that man died of overdose or heart attack. Video doesn’t show his resistance that got him in that position. Police being crucified.” 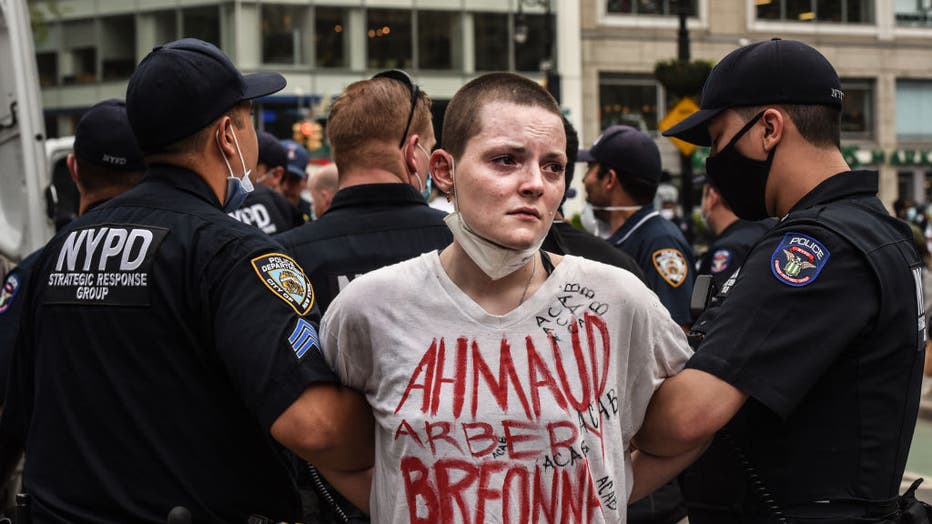 NEW YORK, NY - MAY 28: A protesters is detained by police during a rally against the death of Minneapolis, Minnesota man George Floyd at the hands of police on May 28, 2020 in Union Square in New York City. (Photo by Stephanie Keith/Getty Images)

LOUISVILLE, Ky. — At least seven people were shot in Louisville as hundreds of protesters converged on City Hall demanding justice for Breonna Taylor, a black woman who was fatally shot in March by police who broke down her door.

Louisville Metro Police said early Friday that at least one person was in critical condition. “No officers discharged their service weapons,” and all seven shot were civilians, police spokesman Sgt. Lamont Washington wrote in an email to The Associated Press.

“I feel the community’s frustration, the anger, the fear, but tonight’s violence and destruction is not the way to solve it,” Louisville Mayor Greg Fischer said in a video posted to Twitter. He said two of the wounded underwent surgery and five were in good condition.

Thursday night’s demonstration came as protesters across the country, in cities including Los Angeles, Denver, New York and Memphis, turned out in alliance with demonstrators in Minneapolis, where George Floyd became the latest black man to die in police custody. 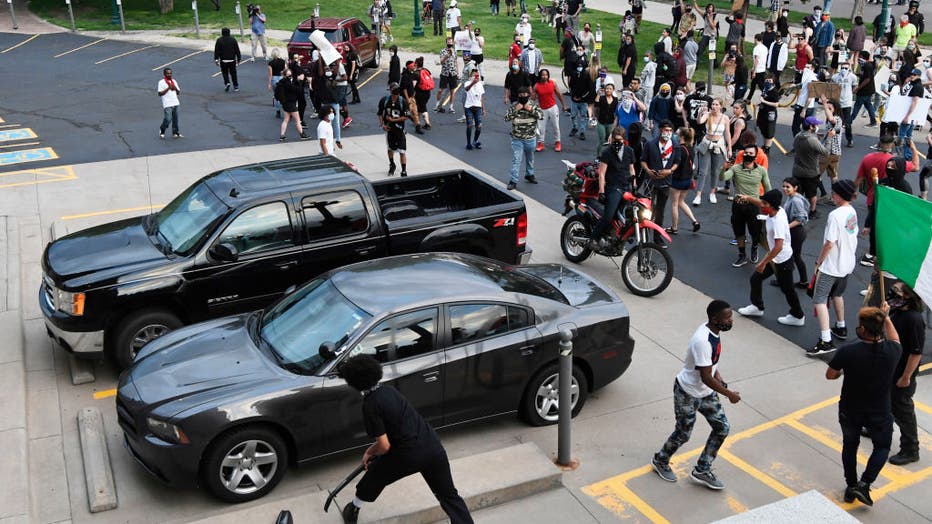 DENVER, CO - MAY 28: Protestors at the Colorado Capitol building in Denver on Thursday evening, May 28, 2020. (Photo by Andy Cross/MediaNews Group/The Denver Post via Getty Images)

DENVER — Protesters swarmed Denver on Thursday, blocking traffic and smashing vehicles while running from gunfire and police tear gas after a demonstration against the death of a black man in Minneapolis police custody turned violent.

Hundreds of demonstrators stood in the downtown streets and chanted as darkness fell outside the Colorado State Capitol, where protesters spray-painted graffiti and broke car windows. In other areas of downtown Denver, police in riot gear fired gas canisters, used rubber bullets and walked in a phalanx through the streets to drive protesters away. The protest briefly spilled over onto Interstate 25, blocking all lanes of traffic until police used tear gas to disperse the crowd.

The protests continued into the night, despite Denver Mayor Michael Hancock pleading for calm.

“I certainly understand everyone’s frustration and sense of pain and disgust following the murder of George Floyd in Minneapolis,” he said in a video posted on Twitter. “But I want to plead to everyone. Let’s demonstrate, but let’s demonstrate peacefully. Leave the weapons home.” 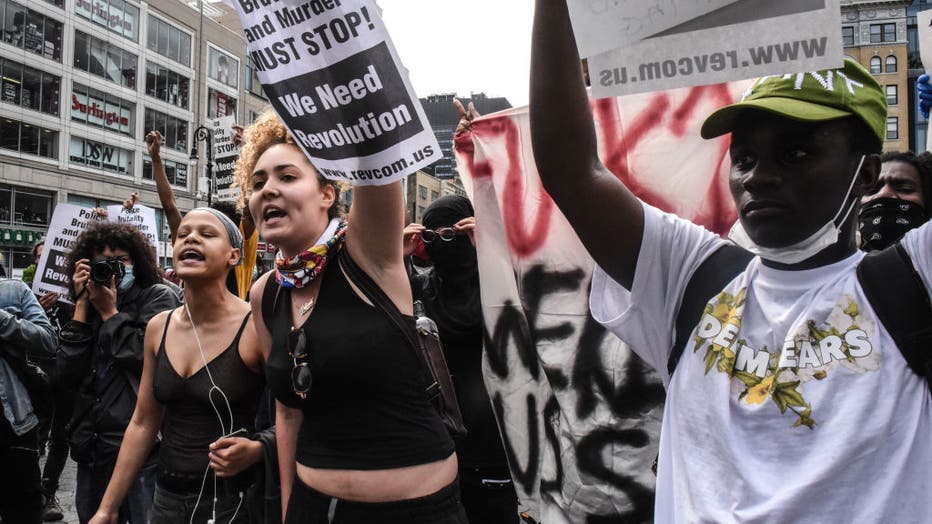 NEW YORK, NY - MAY 28: Protesters clash with police during a rally against the death of Minneapolis, Minnesota man George Floyd at the hands of police on May 28, 2020 in Union Square in New York City. Floyd's death was captured in video that went vir

NEW YORK — Protesters angry about the death of a black Minnesota man in police custody defied New York’s prohibition on public gatherings Thursday and staged a chaotic rally in Manhattan, where they faced off with officers enforcing social distancing rules.

Scores of demonstrators, some wearing masks and some not, massed in Union Square and marched through the streets chanting “I can’t breathe” and waving signs with slogans including “Police brutality and murder must stop.”

NYPD MAKES ABOUT 70 ARRESTS IN PROTEST OVER GEORGE FLOYD DEATH

Police officers, also wearing masks to protect against the virus, lined up opposite the demonstration. Video posted on social media showed occasional skirmishes as officers pushed the crowd back.

The New York Police Department said more than 30 people had been taken into custody. Video showed at least one demonstrator being clubbed and others being wrestled to the ground as some protesters shoved officers and screamed insults. The police department said one officer was struck with a garbage can and another punched.

COVERAGE ON DEATH OF GEORGE FLOYD