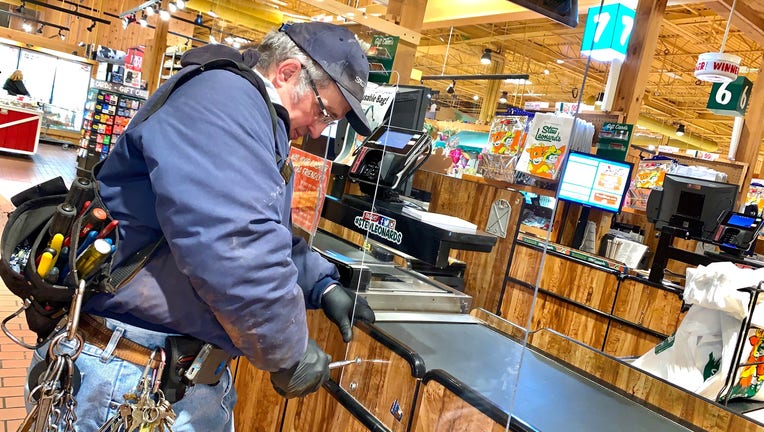 A worker installs a transparent protective barrier in a checkout lane at a Stew Leonard's supermarket in Norwalk, Conn. (Courtesy of Stew Leonard's)

NEW YORK - Several supermarket chains are installing transparent barriers in checkout lanes to give cashiers and shoppers some extra protection during the coronavirus pandemic.

Walmart, Stew Leonard's, Kroger, Publix, and other retailers have begun to install barriers and other features to encourage people to keep their distance from each other.

Stew Leonard's is installing plexiglass barriers at all seven of its locations in New York, New Jersey, and Connecticut in the coming days, a spokesperson said.

"They will be placed at every other check out lane plus at our customer service desk, at our ice cream window, and our coffee bar," spokesperson Meghan Bell said in an email to FOX 5 NY. At this time, cashiers are stationed at every other lane to give them and shoppers even more distance from each other. 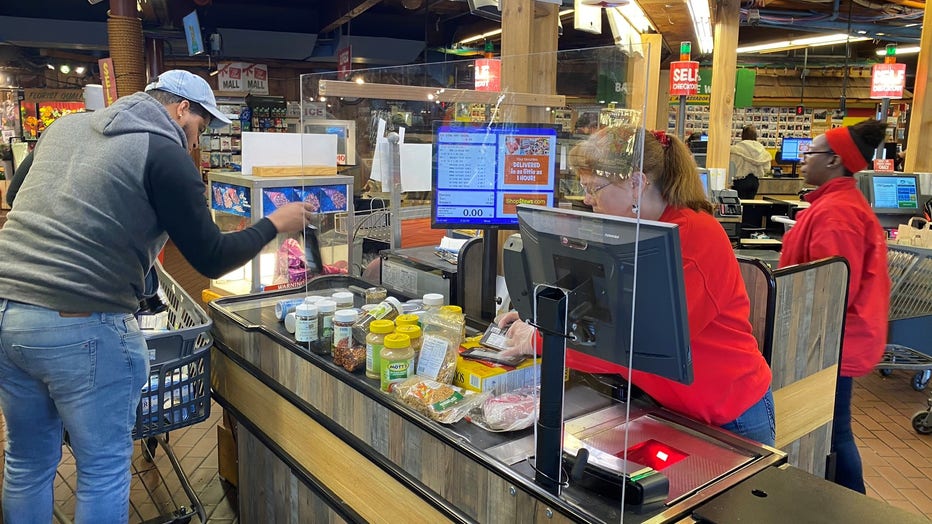 A transparent protective barrier separates the cashier from the shoppers at a Stew Leonard's supermarket in Norwalk, Conn. (Courtesy of Stew Leonard's)

Walmart said in a statement that it has started installing barriers at Walmart and Sam's Club pharmacy lanes and plans to install them at regular Walmart registers "over the next 2 to 3 weeks."

"Installing these barriers is another way Walmart is helping bring peace of mind that we are doing everything we can to keep our people and our stores safe," Walmart said in the statement.

"Over the coming days and week we are installing floor decals in our stores at both the entrances and in checkout lanes, making it easier for customers to judge the proper social distance from each other," Walmart said.

Kroger said in a social media post that it was taking several steps to fight the spread of the virus, including installing floor decals and partitions at registers.

Officials and members of the food industry across the region are telling Americans not to panic or worry about food shortages, saying that the U.S. food chain is well-prepared to keep people fed.