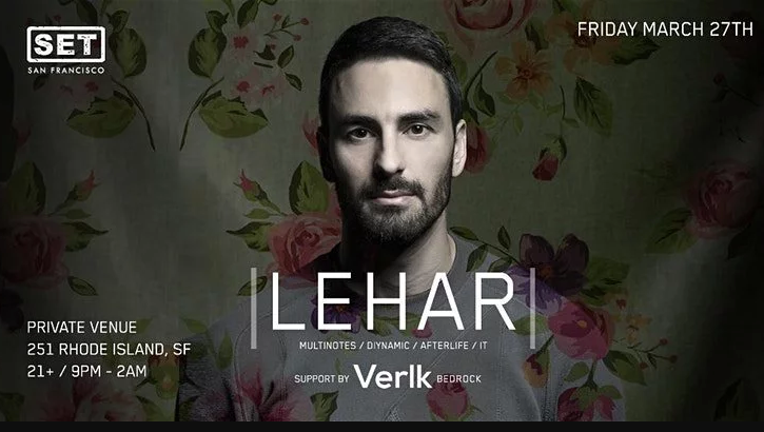 SAN FRANCISCO - San Francisco's city attorney on Wednesday says his enforcement action to shut down what he called a "rogue" and illegal party that had been scheduled for this weekend worked.

But meanwhile, the promoter of the party, Christian Pineiro, told KTVU that he has coronavirus and has been having major difficulty trying to officially cancel the event because of technical glitches and because he's been sleeping for 16 hours a day.

Speaking from quarantine at home, Pineiro said he had no intention of actually throwing the "Lehar (Multinotes, Diynamic, Afterlife)," at 251 Club Cocktail on Rhode Island Street in San Francisco on Friday night during the coronavirus-inspired shelter-in-place.

He said that he had tried to get Eventbrite to take down the invitation to the party 10 days ago, but because of some unknown problems, couldn't get it done.

"All I do is sleep all day long," he said, while coughing over the phone. "I really have no energy for this."

He said he traveled overseas and contracted the disease there. He said he has had no contact with anyone since and is staying at home by himself, having meals dropped off to his front door.

Pineiro was perplexed as to why City Attorney Dennis Herrera would send out such a terse announcement earlier on Wednesday, where he called the gathering "rogue" and illegal.

Herrera's office said investigators went to the home of the club's owner on Tuesday night, telling her she had to shut the party down or face a fine.

About two hours after Herrera's order came out, the Eventbrite invitation was taken down, even though Pineiro said he doesn't exactly know how that happened.

The city attorney said that is proof their enforcement worked.

"As soon as we went public," said Herrera's spokesman, John Cote, "they shut it down. They had been selling tickets for days."

Cote said he was glad the invitation was taken down because even if the club wasn't hosting the party, guests might still have shown up there en masse hoping for the party.

But the club's co-owner, Rick Hayes, was very upset that the city attorney blasted his business, when he had told city permitters and police on Tuesday that he had no intention to hold the gathering.

Hayes said he had written all over his Facebook pages that his club was closed and all events canceled.

"This is bull," he said. "They are effectively ruining my small business."