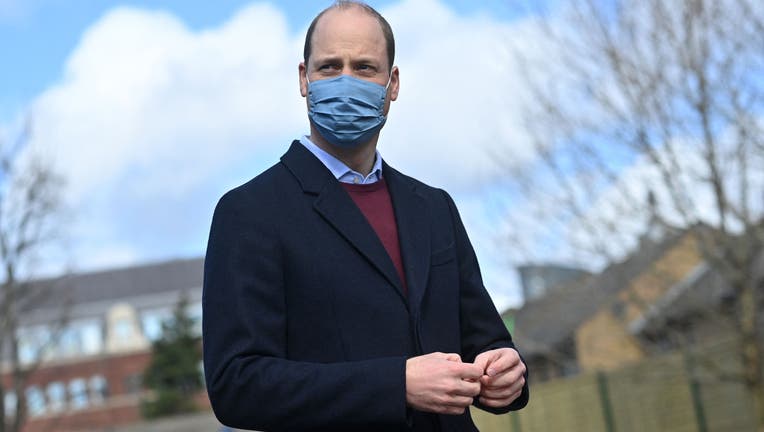 Britain's Prince William, Duke of Cambridge reacts to a question from the media as he leaves after a visit to School21 following its re-opening after the easing of coronavirus lockdown restrictions in east London on March 11, 2021. (Photo by JUSTIN T

Prince William has been crowned with another title: world’s sexiest bald man.

The Sun reported that cosmetic surgery specialists Longevita conducted the study by researching how many times the 38-year-old had been called ‘sexy’ in various online blogs, web pages and articles.

According to the study, William had been called ‘sexy’ a whopping 17.6 million times, beating out other famous bald men.

But many people took to Twitter to disagree with William’s title, suggesting their own celebrity finalist.

"May I introduce you to Boris Kodjoe who is also 10 years older than Prince William?" one user wrote.

"Have you seen Stanley Tucci?" another user posted.

The prince’s new title may be far from his mind as he continues to deal with the fallout from his brother Prince Harry’s and his wife’s interview with Oprah Winfrey.

Prince William insisted earlier this month that his family is not racist as he became the first British royal to speak out about accusations of bigotry made by Prince Harry and Meghan.

William made the comments in response to questions shouted at him by reporters during a visit to an East London school. While members of the royal family often ignore such queries, William used the opportunity to address the explosive allegations that have rocked the monarchy.

"We’re very much not a racist family," William, 38, said as his wife, Kate, walked by his side.

Buckingham Palace is struggling to quiet criticism after Harry and Meghan alleged that the duchess was the victim of racism and callous treatment during her time as a working member of the royal family. The palace tried to respond to the charges, made during an interview with U.S. TV host Oprah Winfrey, with a 61-word statement that critics called "too little, too late."

Harry, 36, and Meghan, 39, walked away from royal duties last year and moved to California, saying they wanted to escape the intrusive British media and live a normal life.

Thirty-six hours after the comments were first aired, the palace issued a written statement in the name of Queen Elizabeth II, Harry’s grandmother.

"The whole family is saddened to learn the full extent of how challenging the last few years have been for Harry and Meghan," the palace said. "The issues raised, particularly that of race, are concerning. While some recollections may vary, they are taken very seriously and will be addressed by the family privately."

It’s not clear if William and Harry have spoken since the interview.