Prince Philip, the husband of Queen Elizabeth II and Duke of Edinburgh, has been laid to rest at Windsor Castle. The service was a slimmed-down version of what had been planned. Because of the COVID-19 pandemic, it was entirely closed to the public.

LONDON (AP) - Prince Philip, the husband of Queen Elizabeth II and Duke of Edinburgh, has been laid to rest at Windsor Castle.

Thirty members of the House of Windsor sat in St. George's Castle and watched as Philip was lowered into the vault beneath the chapel. It's only a temporary resting place, with his remains destined to join the queen and her parents upon her death. 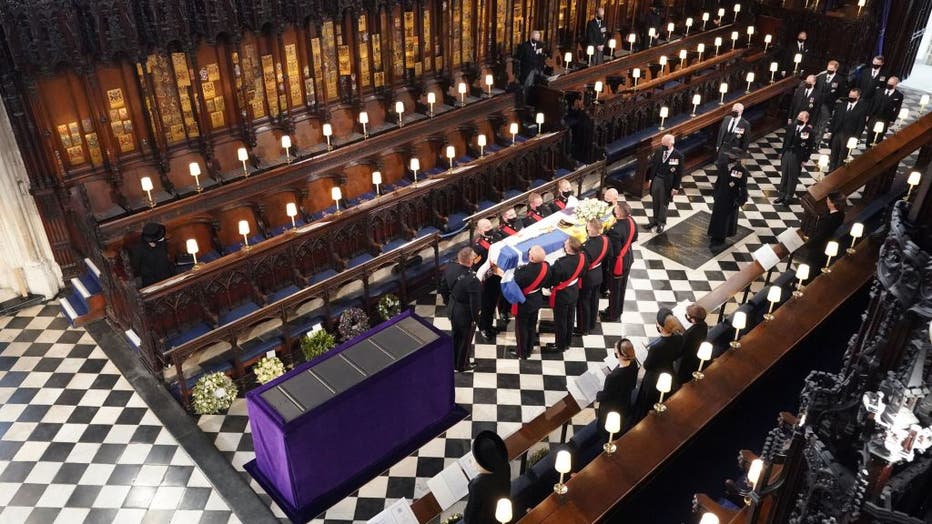 Queen Elizabeth II (L) watches as pallbearers carry the coffin of Britain's Prince Philip, Duke of Edinburgh during his funeral inside St George's Chapel in Windsor Castle in Windsor, west of London, on April 17, 2021. - Philip, who was married to Qu

It was entirely closed to the public and the entire procession and funeral took place within the grounds of the castle, a 950-year-old royal residence 20 miles west of London.

Ten members of the royal family, led by Prince Charles and his sister, Princess Anne, walk behind the specially designed Land Rover carrying the coffin on the eight-minute journey from the State Entrance of Windsor Castle to St. George’s Chapel.

The service marks the death of a royal patriarch who was also a beloved husband and father, and one of a dwindling number of veterans of World War II.

In honor of Philip's military career, hundreds of troops from the army, navy, air force and marines marched into Windsor Castle for their ceremonial roles in the funeral procession. 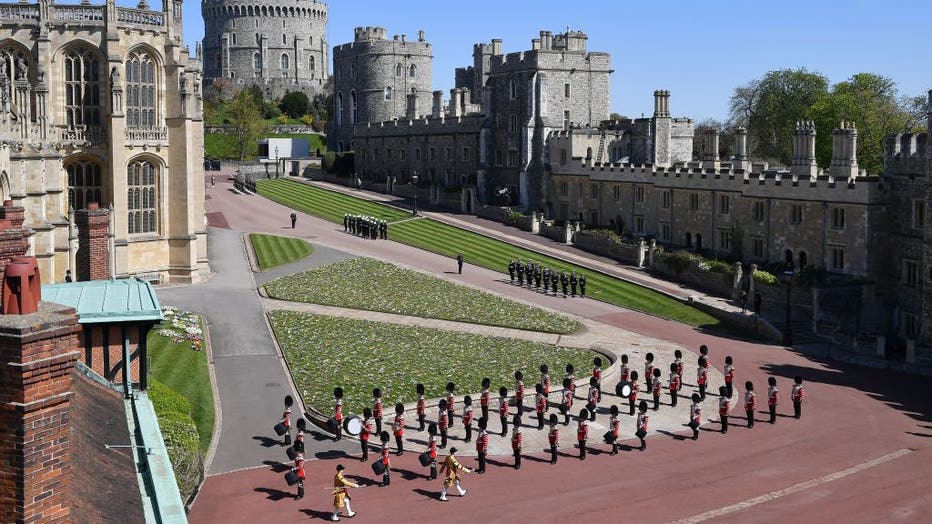 Members of the military march before the funeral service of Britain's Prince Philip, Duke of Edinburgh inside St George's Chapel in Windsor Castle in Windsor, west of London, on April 17, 2021. (Photo by VICTORIA JONES/POOL/AFP via Getty Images)

Many elements of the funeral were steeped in military and royal protocol, from the armed forces personnel lining the funeral route to the artillery salutes and Philip’s naval cap and sword atop the coffin.

Philip spent almost 14 years in the Royal Navy and saw action in the Mediterranean, Indian Ocean and Pacific during World War II. Several elements of his funeral have a maritime theme, including the hymn "Eternal Father, Strong to Save," which is associated with seafarers and asks God: "O hear us when we cry to thee/For those in peril on the sea."

His personal standard draped his coffin, highlighting the many aspects of his life. The three blue lions over a yellow field and the Greek Cross represent his time as a prince of Denmark and Greece.

The Mountbatten family was included on the bottom half with black and white striping inspired by their coat of arms. And Edinburgh, his dukedom, was reflected by Edinburgh's coat of arms -- a black castle with three red flags. 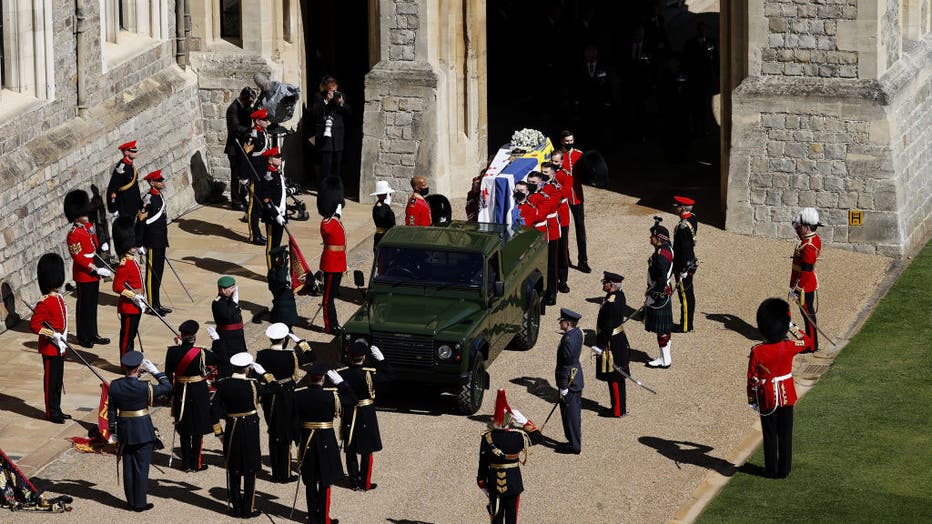 The Duke of Edinburgh’s coffin, covered with His Royal Highness’s Personal Standard is carried to the purpose built Land Rover during the funeral of Prince Philip, Duke of Edinburgh at Windsor Castle on April 17, 2021 in Windsor, England. (Photo by A

The service included some of Philip's favorite hymns and musical selections performed by military personnel.

The queen sat alone inside of St. George's Chapel while paul bearers carried Philip inside. She said goodbye to the man she has loved since she was just a teenage princess visiting the naval academy in Dartmouth.

Queen Elizabeth II takes her seat for the funeral service of Britain's Prince Philip, Duke of Edinburgh inside St George's Chapel in Windsor Castle in Windsor, west of London, on April 17, 2021. - Philip, who was married to Queen Elizabeth II for 73

Even in grief, the queen set an example by following social distancing guidelines brought on by the pandemic.

The palace insisted the royals would strictly adhere to national virus guidelines, measures that in theory would entail mask-wearing in an enclosed space and social distancing. Other royals sat together according to their households.

Buckingham Palace on Thursday released the broad outlines of the funeral program. The palace revealed that Prince William and Prince Harry wouldn't walk side-by-side Saturday as they followed their grandfather’s coffin into the church ahead of the funeral.

The brothers, whose relationship has been strained amid Harry’s decision to quit royal duties and move to California, flanked their cousin Peter Phillips, the son of Princess Anne.

RELATED: Prince Philip funeral reunites William and Harry, who were seen exchanging words after the service

It marked the first public reunification for the two brothers since the airing of Harry and Meghan’s interview with Oprah. The moment is likely to stir memories of the image of William and Harry at 15 and 12, walking behind their mother Princess Diana’s coffin in 1997, accompanied by their grandfather Philip.

Meghan, who is pregnant, followed her doctor's advice and did not travel for Philip's funeral.

Prince Charles, the heir to the throne and the father of the princes, together with his sister, Princess Anne, led the 15-member procession. Prince Andrew and Prince Edward also walked behind the hearse.

Coronavirus restrictions meant only 30 mourners attended the funeral. Other senior royals and three of Philip's German relatives were invited. The queen's husband of 73 years died April 9 at the age of 99.

Here is the full list of mourners who attended the funeral: