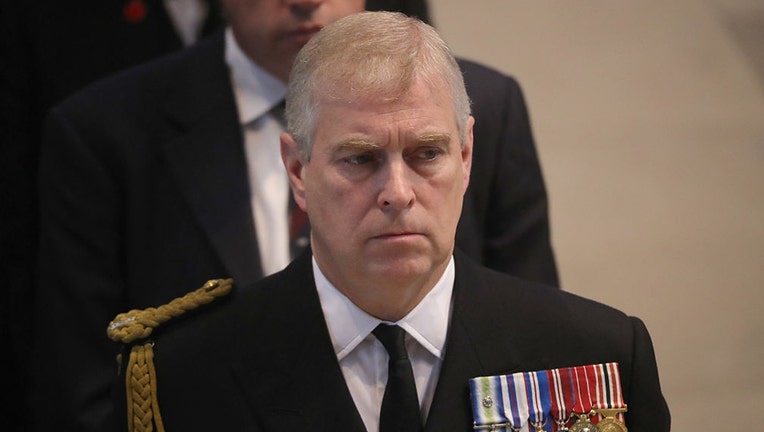 FILE - Prince Andrew, Duke of York, attends a commemoration service at Manchester Cathedral marking the 100th anniversary since the start of the Battle of the Somme.  (Christopher Furlong - WPA Pool/Getty Images)

LONDON - Buckingham Palace said on Thursday that Prince Andrew's military affiliations and royal patronages have been returned to Queen Elizabeth II with her "approval and agreement."

The palace statement came after more than 150 navy and army veterans wrote to the queen asking her to strip Andrew of all his military ranks and titles amid continued legal trouble for the prince, who is embroiled in a sex assault lawsuit in the U.S.

"With the queen’s approval and agreement, the Duke of York’s military affiliations and royal patronages have been returned to the queen," Buckingham Palace said in a statement. "The Duke of York will continue not to undertake any public duties and is defending this case as a private citizen."

A U.S. district judge on Wednesday refused to dismiss a civil case against Andrew by an American woman, Virginia Giuffre, who alleges the royal sexually abused her when she was 17.

District Judge Lewis A. Kaplan rejected an argument by Andrew’s lawyers that Giuffre’s lawsuit should be thrown out at an early stage because of an old legal settlement she had with Jeffrey Epstein, the financier she claims set up sexual encounters with the prince.x

He stressed that he wasn’t ruling on the truth of the allegations.

Andrew's lawyers have said that the royal never sexually abused or assaulted Giuffre and that he "unequivocally denies Giuffre’s false allegations against him."

Kaplan said the $500,000 settlement between Epstein and Giuffre didn’t involve the prince and didn’t bar a suit against him now.

Giuffre sued the prince in August, saying she was coerced into sexual encounters with Andrew in 2001 by Epstein and his longtime companion, Ghislaine Maxwell.

Andrew's lawyers had said the lawsuit lacked specificity and was disqualified by the deal she reached in 2009 with lawyers for Epstein. They also attacked the credibility and motives of Giuffre, saying in October that the lawsuit was aimed at achieving "another payday at his expense and at the expense of those closest to him."

The prince’s lawyers have said that Andrew never sexually abused or assaulted Giuffre and that he "unequivocally denies Giuffre’s false allegations against him."

The prince himself has strenuously denied Giuffre’s allegations. In late 2019, Prince Andrew told BBC Newsnight that sex with Giuffre "didn’t happen" and he has "no recollection" of ever meeting her.

The interview was widely panned by critics who said Andrew seemed insensitive to Epstein’s victims. Afterward, the prince stepped back from royal duties.

On Wednesday, his lawyers did not immediately respond to messages seeking comment. Buckingham Palace told The Associated Press that it would not comment on the "ongoing legal matter."

Kaplan noted that he was required by law, at this stage of the litigation, to proceed as if the allegations made by Giuffre are true.

"The law prohibits the Court from considering at this stage of the proceedings defendant’s efforts to cast doubt on the truth of Ms. Giuffre’s allegations, even though his efforts would be permissible at trial," Kaplan said.

Giuffre's settlement with Epstein was reached a decade before the financier killed himself at a Manhattan lockup as he awaited a sex trafficking trial in 2019.

But Kaplan wrote that there were substantial indications in the $500,000 settlement that Epstein and Giuffre did not clearly intend for language to "directly," "primarily," or "substantially" benefit someone such as the prince. He noted that the prince was not a party to the agreement.

He also said the agreement was "far from a model of clear and precise drafting."

The judge's findings mirrored comments he made during oral arguments by both sides when he was particularly dismissive of the arguments made on the prince's behalf.

Epstein, 66, killed himself in a Manhattan jail cell in 2019 while awaiting a sex trafficking trial, while Maxwell, 60, was recently convicted of sex trafficking and conspiracy charges in federal court in New York. Giuffre’s allegations against Andrew were not a part of either criminal case.

The AP does not typically identify people who say they are victims of sexual assault unless they choose to come forward publicly, as Giuffre has.