This video shows students and teachers taking cover under desks at a school in Kingston, Jamaica, on Tuesday. (Source: Maverley Primary and Junior High School via Storyful)

A powerful earthquake struck south of Cuba and northwest of Jamaica on Tuesday afternoon, according to the U.S. Geological Survey.

The USGS measured a magnitude of 7.7. The epicenter of the quake was in the Caribbean Sea 125 kilometers north-northwest of Lucea, Jamaica.

A tsunami warning was issued to Jamaica, Cuba, and the Cayman Islands, according to International Tsunami Information Center. But no tsunami alerts were in effect for U.S. territories in the region, according to tsunami.gov.

The earthquake could be felt as far as Miami, where some buildings were evacuated, according to reports.

Also, a woman who works in a Catholic cultural center in the center of Santiago, the largest city in far-eastern Cuba, told the AP that she and others felt the quake.

"We were all sitting and we felt the chairs move," Belkis Guerrero said. "We heard the noise of everything moving around."

"It felt very strong but it doesn't look like anything happened," she added.

The earthquake happened because of what is called a "strike-slip faulting" on the boundary between the North America and Caribbean tectonic plates, according to the USGS. 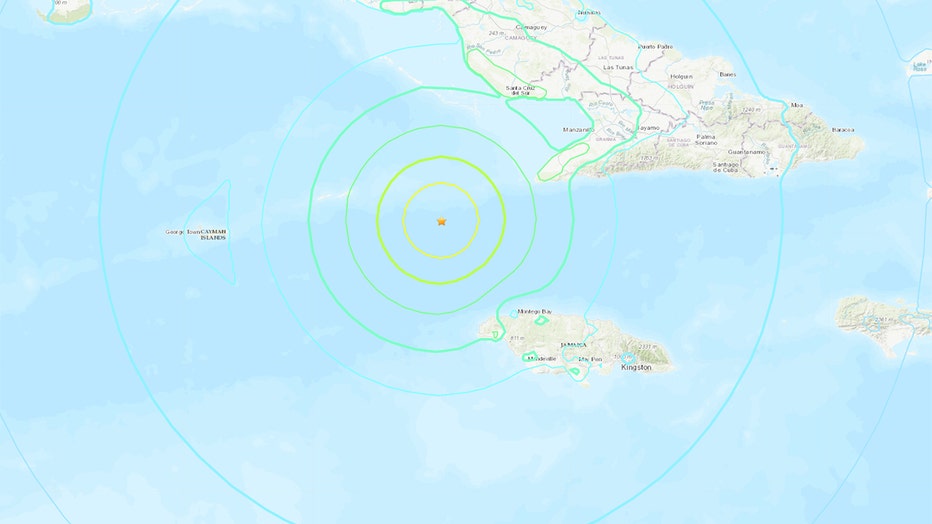