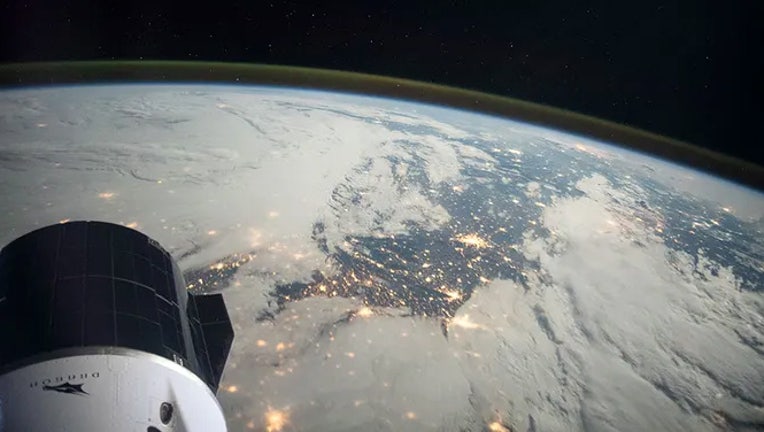 A portion of the SpaceX Cargo Dragon vehicle is pictured as the space station orbited above northern France in September of 2021. (Image: NASA)

CAPE CANAVERAL, Fla. - A SpaceX Dragon spacecraft scheduled to send supplies to the International Space Station this week remains grounded after an issue was identified during fueling.

The delay comes after NASA said elevated vapor readings were detected during propellant loading of the Cargo Dragon spacecraft.

"During propellant loading of the Dragon spacecraft, elevated vapor readings of mono-methyl hydrazine (MMH) were measured in an isolated region of the Draco thruster propulsion system," NASA said in a statement. "The propellant and oxidizer have been offloaded from that region to support further inspections and testing. Once the exact source of the elevated readings is identified and cause is determined, the joint NASA and SpaceX teams will determine and announce a new target launch date."

NASA and SpaceX will work to understand the issue before moving ahead with the launch. The Draco thrusters are used to navigate the spacecraft in orbit, and a potential leak could be explosive because of the chemicals involved in fueling the hardware.

Mono-methyl hydrazine is a commonly used fuel for rockets and missiles. Spontaneous ignition can occur when it comes in contact with oxidizers like nitrogen tetroxide.

The Cargo Dragon spacecraft does not have SuperDraco thrusters like the Crew Dragon vehicle does for the emergency abort system. Still, a 2019 test of the SuperDracos resulted in an explosion at Cape Canaveral that sent orange-tinted smoke across the Space Coast. SpaceX and NASA jointly investigated the explosion and found a faulty valve was to blame.

When CRS-25 does launch from Kennedy Space Center Launch Complex 39A, it will deliver supplies, equipment and new science investigations to be conducted on the International Space Station.

Crew and Cargo Dragon spacecraft launch atop SpaceX's Falcon 9 rocket. Both the rocket booster and the spacecraft will be reused on other missions. SpaceX lands the booster at sea on a droneship after launch.

WEATHER IS CRITICAL FOR A SAFE SPACEX CREW DRAGON SPLASHDOWN

The cargo capsule will be packed with 4,500 pounds of research, groceries for the astronauts and more. One of the NASA science missions fly up will be the Earth Surface Mineral Dust Source Investigation (EMIT). The imaging instrument will measure dust in Earth's arid regions, which can impact climate and weather.

SpaceX and NASA will pick a new launch date and time depending on range availability, weather and the ISS schedule.