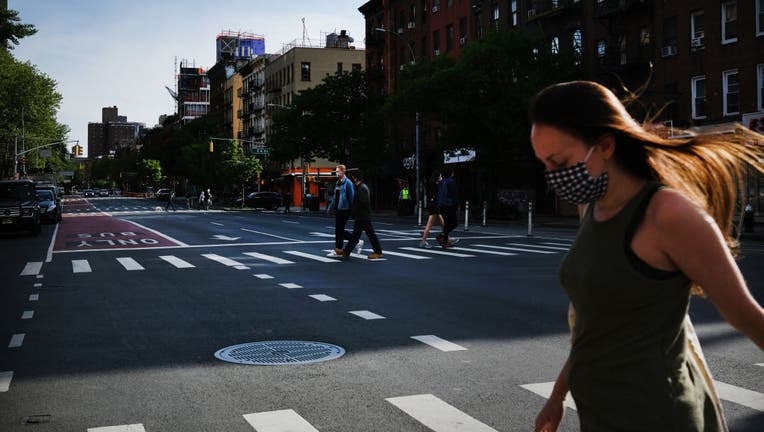 People enjoy a mild spring afternoon in lower Manhattan on May 19, 2020 in New York City. Despite falling numbers of coronavirus cases in New York City hospitals, Manhattan has yet to provide a date for the re-opening of its retail businesses. (Photo

DES MOINES, Iowa (AP) — Strong concern about a second wave of coronavirus infections is reinforcing widespread opposition among Americans to reopening public places, a new poll finds, even as many state leaders step up efforts to return to life before the pandemic.

Yet support for public health restrictions imposed to control the virus’ spread is no longer overwhelming. It has been eroded over the past month by a widening partisan divide, with Democrats more cautious and Republicans less anxious as President Donald Trump urges states to “open up our country,” according to the new survey from The Associated Press-NORC Center for Public Affairs Research.

The poll finds that 83% of Americans are at least somewhat concerned that lifting restrictions in their area will lead to additional infections, with 54% saying they are very or extremely concerned that such steps will result in a spike of COVID-19 cases.

“Oh, I’d like to get my hair and nails done. It’s one of those little pleasures you take for granted,” said Kathy Bishop, a 59-year-old billing specialist who battled pneumonia two years ago. “But I’m just going to suck it up. It’s not worth the risk.”

Bishop lives in the western suburbs of Columbus, Ohio, a state where Republican Gov. Mike DeWine is among the state chief executives leading a gradual reopening of businesses such as salons, barbershops, restaurants and bars. But even after nine weeks spent cloistered at home, Bishop is among the solid majority of Americans who support rigorous criteria for economic reopening that goes beyond wearing masks in public places and continued social distancing.

About 8 in 10 Americans say that it's essential to reopening for people to return to self-quarantine if they are exposed to the virus. Roughly 6 in 10 also say having widespread testing for the coronavirus in their area is essential to reestablishing public activities, along with requiring people to keep six feet apart in most places and to wear face masks when they're near others outside their homes.

Nearly as telling as the public's appetite for rigorous precaution: close to half say it is essential that a vaccine be available before public life resumes. Another third say that's important, although not essential.

Taken together, the findings suggest that while some Americans are anxious to get back to business as usual, most don’t see the country returning anytime soon to what once was considered normal. Instead, Americans largely envision a protracted period of physical distancing, covered faces and intermittent quarantines ahead, perhaps until a vaccine is available.

Joe Yeskewicz, of Middleboro, Massachusetts, said he believes a vaccine is a must for his town of 23,000 south of Boston to fully reopen. He's among the nearly 8 in 10 Americans who don't expect one to be ready before the end of the year.

“It is so novel, so unpredictable and so terribly, terribly contagious,” the 76-year-old retired teacher and college professor said of the virus. “The vaccine predictably could take years because it has to undergo a vigorous testing program for it to be effective and safe. Regardless of the optimism, this is going to take a while.”

The latest AP-NORC survey was conducted over this past weekend, before Monday's news of positive results in a clinical trial of a potential vaccine. It found that a solid majority of about 6 in 10 Americans are in favor of requiring people to stay in their homes except for essential errands, with about third of the country strongly in behind that approach.

While still resolute, support for such measures to contain the coronavirus has slipped in the past month — 80% were in favor of stay-at-home orders in April. The new survey found that 69% now favor restricting gatherings to 10 people or fewer, down from 82% in April.

Those declines are largely driven by changes in attitudes among Republicans, as Trump and several GOP governors have aggressively pressed for and moved ahead with reopening businesses and public places. Some people in Wisconsin headed straight for the local tavern last week after the conservative-controlled state Supreme Court upheld the GOP-controlled legislature's appeal of Democratic Gov. Tony Evers’ stay-at-home order.

Only about a third of Republicans say they are very or extremely concerned about the possibility of additional infections if restrictions are lifted, compared to three-quarters of Democrats.

Peggy Dullum, a 65-year-old Republican and retired state health care worker from suburban Sacramento, California, said she once supported strict lockdown measures to contain the virus. But she now thinks they have outlived their purpose.

“If they’d have opened all retail, it would have spread out social activity rather than congesting it in those few retail locations where people crowded without masks,” Dullum said. “Make everybody wear a mask, instead of making it voluntary, and we probably could have kept the economy moving at a solid pace during the second month.”

But Yeskewicz, the Democratic-leaning independent from Massachusetts, shakes his head — including at the small but vocal pockets of protesters, at times armed and brandishing Confederate flags, who complain leaders who back continued safety measures are doing so out of anything but concern for public health.

“We can’t just arbitrarily restore privileges simply because people are so desperate they can’t stand it any more,” Yeskewicz said. “It's not about peoples' rights being violated. They are trying to keep you alive, you bozos!”

The AP-NORC poll of 1,056 adults was conducted May 14-18 using a sample drawn from NORC’s probability-based AmeriSpeak Panel, which is designed to be representative of the U.S. population. The margin of sampling error for all respondents is plus or minus 4.2 percentage points.