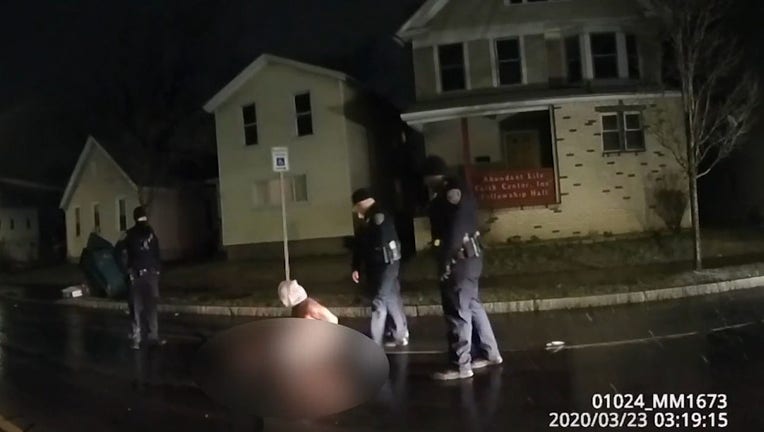 NEW YORK - Not five minutes after police slipped a “spit hood” over Daniel Prude's head, the 41-year-old Black man went limp. A week later, he was taken off life support.

Prude's suffocation in Rochester, New York, in March has drawn new attention to the hoods — mesh bags that have been linked to other deaths — and the frequent reliance on police to respond to mental health emergencies.

His death has underscored one of the top demands of the police reform movement: that certain duties should not be handled by law enforcement but by social workers or mental health experts. Seven officers involved in the encounter were suspended with pay Thursday.

While many in law enforcement defend the hoods as vital to prevent officers from being spit on or even bitten — a concern that has taken on new importance during the coronavirus pandemic — critics have denounced them as dangerous and inhumane. For some, they evoke hoods used on prisoners at U.S. government overseas detention sites or “black sites.”

Amnesty International condemned the use of spit hoods Thursday, a day after Prude's family made public body camera video and police reports it obtained from the Rochester department. The organization said the hoods are particularly dangerous when a person is already in distress, as Prude appeared to be.

The hoods often “looks like something out of Abu Ghraib,” said Adanté Pointer, an Oakland civil rights lawyer who has handled several cases involving the devices. “They’re often used in a punitive way.”

Prude, in Rochester to visit his brother, was taken by police for a mental health evaluation just hours before the fatal encounter after he was said to have expressed suicidal thoughts. Prude's brother told police he was calm when he returned to his house but later got high on PCP and ran away, prompting the brother to call 911.

A car rammed through a crowd of people in Times Square protesting the death of Daniel Prude in Rochester, New York.

Police found Prude wandering the street naked after allegedly smashing a storefront window, and he could be seen on body camera footage spitting in the direction of officers and heard claiming to be infected with coronavirus. Officers said that led them to employ the hood.

Prude, handcuffed by this point, can be seen continuing to spit through the mesh and saying that he wanted an officer's gun. The officers then pinned him to the ground, one of them keeping a knee on his back and another pressing his face into the pavement for two minutes. Both appeared white.

Minutes later, an officer could be heard saying, “Ugh, he’s puking.” After realizing Prude had stopped breathing, paramedics who had arrived at some point, began CPR.

“They put a bag over his head, and they squeezed the air out of him,” said Nicolette Ward, a lawyer for one of Prude’s daughters. “He spent the last moments of his life breathing in his own vomit.”

At a news conference Thursday announcing the officers' suspensions, Rochester Mayor Lovely Warren said: “Mr. Daniel Prude was failed by the police department, our mental healthcare system, our society and he was failed by me."

In fact, Prude’s death has raised questions about how authorities respond to mental health emergencies. Many other deaths at the hands of police have resulted from an encounter that began with a call about someone’s mental health and then devolved.

In many departments — New York City for example — there has been a push to better train police on how to manage the mentally ill or to bring in experts who do, but it remains a major issue.

Spit hoods vary in design, but Park City, Utah, police chief Wade Carpenter said the ones he’s seen are made to be breathable and held in place with an elastic around the neck that can easily be broken.

“It wouldn’t put any pressure on the carotid arteries in the neck. It wouldn’t restrict blood flow to the brain and certainly wouldn’t block the mouth or nose,” said Carpenter, adding that officers in the ski town have used the devices for years without issues.

University of South Carolina criminal justice professor Geoffrey Alpert said the hoods have reduced the risk of officers and bystanders getting spit on for decades.

But Prude's death is the second one involving spit hoods to surface since the death of George Floyd at the hands of Minneapolis police sparked a national reckoning on racism and policing. Floyd's death did not involve a spit hood.

Just three weeks after Prude's deadly encounter, a similar one happened in Tucson, Arizona. Police handcuffed and placed a spit hood on the head of a naked man also in distress. Carlos Ingram Lopez died after gasping for air and pleading for water.

In both cases, details about that death didn’t emerge until weeks after.

In another similar episode, a 45-year-old man died in 2015 after police in Bernalillo, New Mexico, placed him in a spit hood, possibly incorrectly.

A responding sergeant from a neighboring community told investigators a thick cotton part of the hood was covering Ben C de Baca’s face, nose and mouth and that he hadn't seen the device "used in that fashion before.”

A medical investigator’s report concluded that improperly placed spit hoods have the potential to cause suffocation and that in this case, the possibility of asphyxia from use of the hood could not be ruled out. Bernalillo settled a wrongful death lawsuit brought by the man's family for an undisclosed sum.

Prison guards have also used spit hoods, sometimes to deadly effect. Their use varies by jurisdiction — police in Minneapolis deploy them but those in New York City don't. The NYPD, the nation’s largest police force, said a team of police EMTs has only recently started testing their effectiveness in the wake of the pandemic.

When British police started using the hoods in recent years, civil liberties advocate Martha Spurrier slammed them as “primitive, cruel and degrading.” Even some senior police officers have agreed.