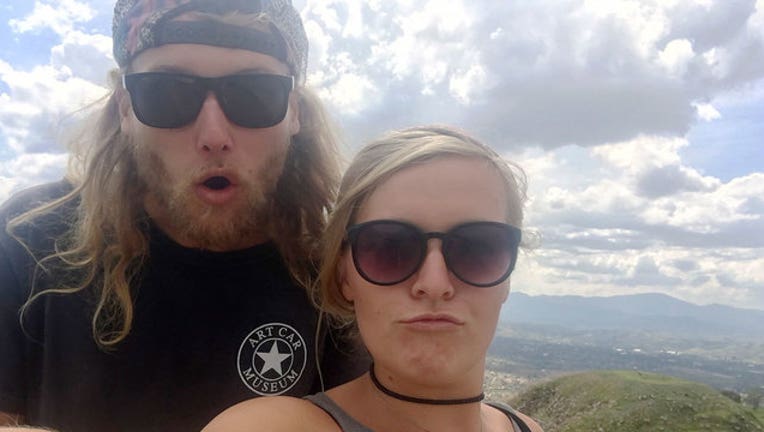 Canadian police said Monday they were searching for two men whose burning car was discovered on Friday about 30 miles south of Dease Lake.  During that investigation, they found an unidentified body a little over a mile from the car.

It's about 300 miles along remote highways from the spot where an Australian and his American girlfriend were shot dead a week ago.  Royal Canadian Mounted Police Sgt. Janelle Shoihet said the cases could be linked.

Police acknowledged in a news release that "there are growing community concerns about the ongoing homicide investigations in northern B.C."

"This is unusual. I know people want to put a link between all of these crimes, but at this point we don't have anything to link them," Royal Canadian Mounted Police Cpl. Chris Manseau said.

"But is its very unusual for that area, especially in such a remote area."

The two were traveling to Whitehorse in the Yukon to look for work and had not been in contact with their families for the past few days, police said. There is no cellphone coverage in many parts of the region. Police said it was not clear why they returned to British Columbia and were driving south.

"At this point we are looking at them as missing persons," Manseau said when asked if they could be suspects.

Police said they were still working to identify the male body that was found nearby the burnt- out vehicle, determine the cause of death and whether there was any connection with the two missing men.

But they did confirm that the body they found was not that of either of the missing teens. Police released a sketch and are seeking the public's help in identifying the man who they described in his 50s and 60s with a heavy build with a grey beard and grey hair.

Dease Lake is about 300 miles (500 kilometers) from where 23-year-old Australian Lucas Fowler and his 24-year-old American girlfriend Chynna Deese were found shot dead along the Alaska Highway near Liard Hot Springs.

Police released a composite sketch of a person of interest who a witness said was seen talking to Fowler on the side the road. The man has a beard with darker skin and was driving an older model Jeep Grand Cherokee with a black stripe on the hood

Fowler, the son of a chief inspector with the New South Wales Police Department, was living in British Columbia and Deese was visiting him.

"I may be an experienced police officer but today I'm standing here as the father of the murder victim," Fowler's father, Stephen said at a news conference in Surrey, British Columbia.

"We are just distraught. This has torn apart two families. Our son Lucas was having the time of his life traveling the world. He met a beautiful young lady and they teamed up. They were a great pair and they fell in love."

He said his son was a fun-loving guy who saved up all his money to travel the world.

"It's the worst ever love story because we now have two young people who had everything ahead of them tragically murdered," he said.

The couple had met at a hostel in Croatia and their romance blossomed as they adventured across the U.S. and abroad to Mexico, Peru and elsewhere, the woman's older brother said Monday.

British Deese said the couple was on a trip to visit Canadian national parks when they were killed. He said the family believes they must have had engine trouble in their van.

Chynna Deese had exhibited a love for traveling that hit full stride as she studied abroad in France while a student at North Carolina's Appalachian State University, British Deese said.

As the study trip neared its end, she insisted that her older brother and sister come meet her.

"I don't think I would have traveled out of the country yet if not for her, but she dragged me and my older sister for a trip to Europe for about 10 days and we went all over," he said.

The Charlotte woman continued travelling after graduation in 2017, sometimes working in hostels abroad.

She brought Fowler back to the U.S. and the two traveled around the country in an SUV borrowed from her father. Fowler also stayed with the family for about three months, spending holidays with them.

"We just thought it was so rare for them to find each other and be together. I've never seen two people happier," the brother said.

"His family has a background in law enforcement, and he was just the most well-vetted traveler, a lot like Chynna, and they were always very cautious. There's not a threatening bone in their body.... There's nothing about those two people that would have brought (their killings) on," her brother said.