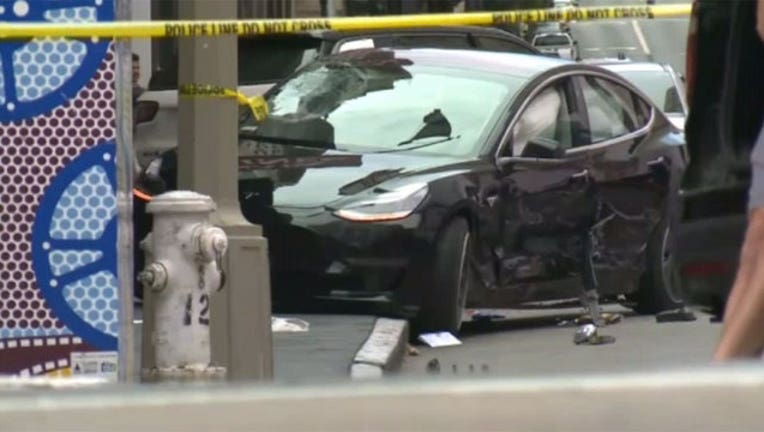 SAN FRANCISCO - A woman was arrested after running a red light in a rented Tesla in San Francisco and causing a crash that killed a tourist and left his wife critically injured, authorities said Monday.

Officers were investigating whether the Tesla, which was rented through the peer-to-peer car rental service Get Around, was operating on self-driving mode, police said in a statement.

Get Around did not immediately respond to email and phone messages from The Associated Press seeking comment.

The 22-year-old suspect, who has not been identified, was booked on suspicion of vehicular manslaughter and running a red light, police said.

Drugs and alcohol did not appear to be a factor. The woman was driving Sunday at least 45 mph in an area with a speed limit of 25 to 30 mph, when she ran the red light and was broadsided by another car.

The Tesla struck the couple in a crosswalk, killing 39-year-old Benjamin Dean. His wife, Kelly Dean, was at a hospital in critical condition.

The couple from Clovis in the Central Valley was in San Francisco celebrating their third wedding anniversary, according to Kelly Dean's Facebook page.