Police officers opened fire on a motorist who refused commands to lower his gun, the chief of department said.

NEW YORK - NYPD officers fatally shot a 65-year-old motorist who came at them with a handgun on Thursday afternoon, a top police official said.

A Highway Patrol officer pulled over the man on the Belt Parkway near the Verrazzano Bridge in Brooklyn shortly after 4 p.m. because he was speeding, Chief of Department Rodney Harrison told reporters. When the uniformed officer got out of her vehicle, the motorist, who was behind the wheel of a Jeep Cherokee, sped off, Harrison said.

The officer then gave chase, positioned her patrol car in front of the Jeep, which then rear-ended the police car, Harrison said.

Chief of Department Rodney Harrison speaks to reporters about a fatal police-involved shooting on the Belt Parkway.

She then called for backup and when another highway unit arrived, they pulled over the Jeep again, this time near the Bay Parkway entrance on the edge of Bath Beach and Gravesend.

"Once the vehicle stopped, the driver, a 65-year-old male who was the sole occupant of the vehicle, exited the Jeep and advanced towards the officers with a gun," Harrison said. "The officers exited their vehicles and gave numerous verbal commands for the male to drop the gun."

Police fatally shot a person during an incident on the Belt Parkway.

The man continued to approach the officers who then opened fire, striking him several times, Harrison said. The officers "immediately began to render aid" and called for an ambulance, the chief said.

RELATED: How the NYPD crime lab fights the war on illegal guns [EXCLUSIVE]

The man was pronounced dead at Lutheran Hospital, Harrison said. 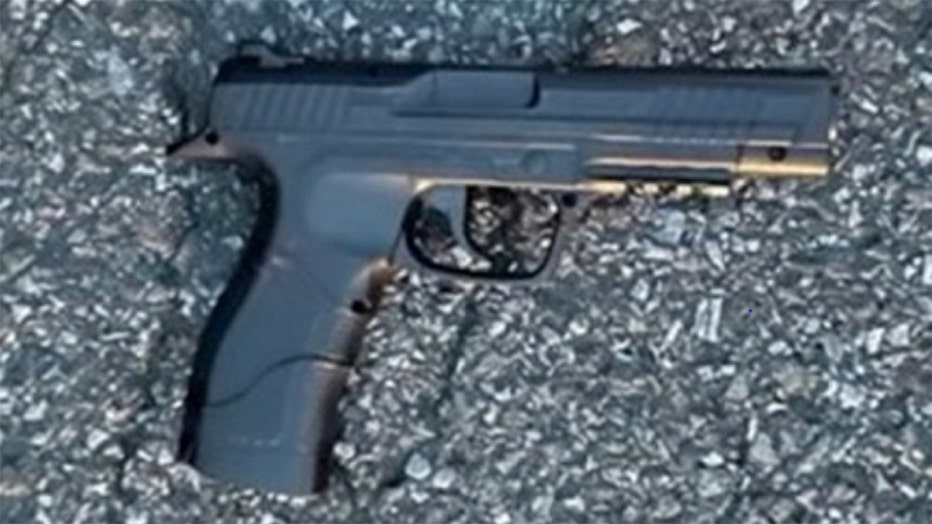 Police say a motorist pointing this semiautomatic handgun at officers on the Belt Parkway. (NYPD Photo)

The department is continuing its investigation of the circumstances of the shooting. Crime scene investigators recovered the driver's gun, which is a semiautomatic pistol. The officers' body cameras were recording during the shooting, the NYPD said.

The NYPD said the motorist had several arrests, mostly for vehicle-related crimes.

Police shot a suspect on the Belt Parkway on Thursday evening. That suspect later died.