The NYPD has some of the most advanced ballistic technology around. With a recent surge in shootings across the city, the lab has had its hands full. This is an exclusive look at one aspect of the department's war on guns.

NEW YORK - You've probably seen those NYPD Crime Scene Unit vans on the streets at major shootings. This is an exclusive look at what police do with the evidence those vans collect and how the biography of a bullet can solve a crime.

First, the NYPD Crime Scene Unit detectives have standard protocols to ensure the integrity of evidence so it holds up in court.

"Anything these guys need to process a scene is basically inside this van or in the back," Lt. Dustin Edwards said.

"We have to take over all photographs of the scene, some scenes could be very small like an apartment, or very large scenes like the street," Detective Carlos Pantoja added.

"With the gloves, when we have evidence we need to pick up we always wear multiple gloves so as not to contaminate — the possibility of our DNA being on what may be there and then we package it in a box, a cardboard box," Detective Ajuba Grandville said. 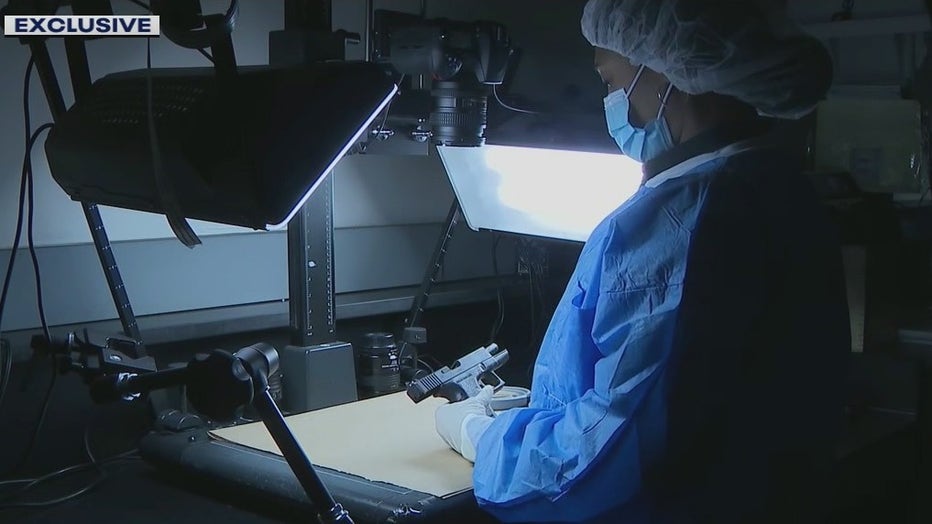 The NYPD Forensic Investigations Division, based in Jamaica, Queens, is the largest crime lab facility of its kind in the United States. The guns that come into the lab go through a checklist of tests on the weapons themselves and the shell casings. The NYPD is taking guns off the streets in record numbers. The lab has never been busier, according to Deputy Chief Emmanuel Katranakis, the commanding officer of the Forensic Investigations Division.

"We've seen a 100% increase in shell casings coming in between 2019 and 2020. So we've seen a 25% increase in the number of firearms submitted to the laboratory over the last two years," Katranakis said. "That 25% is not a small number — so we're upwards in the thousands." 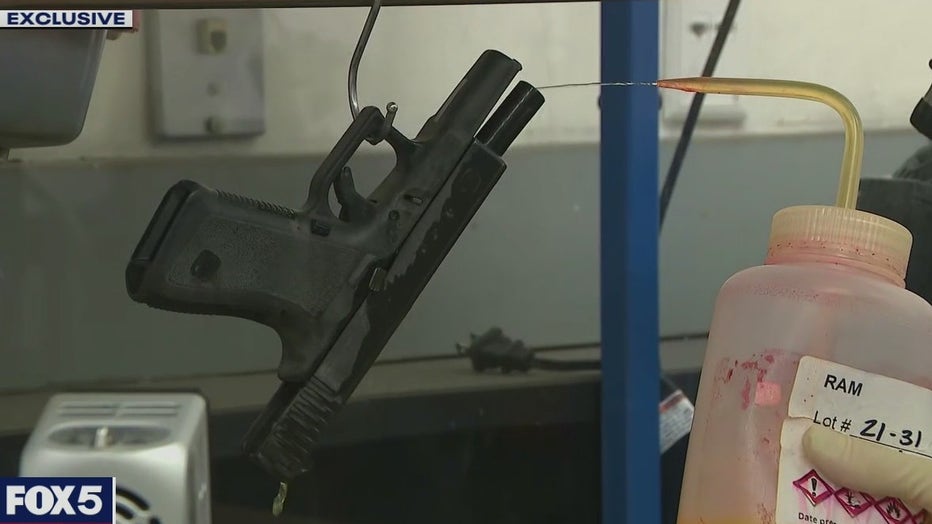 A criminalist coats a semiautomatic pistol with a dye stain. (FOX 5 NY Photo)

Katranakis took us inside and showed us the Fingerprint Unit. Those that cannot be seen with the naked eye are called latent fingerprints. In one technique, the criminalists use superglue in a special heated chamber to create a fume that coats the gun and can be revealing.

"We bring it under the white light and I look with my loop and I see in some areas a ridge detail, which is a partial fingerprint that has developed," Criminalist Alynka Jean said.

Demonstrating another technique, Criminalist Kara Glinski sprayed a gun with a special dye stain to see if it had any prints.

"What the dye stain does is it actually binds with the super glue that was fumed onto the item and it helps to increase the contrast you might not have seen," Glinski said. 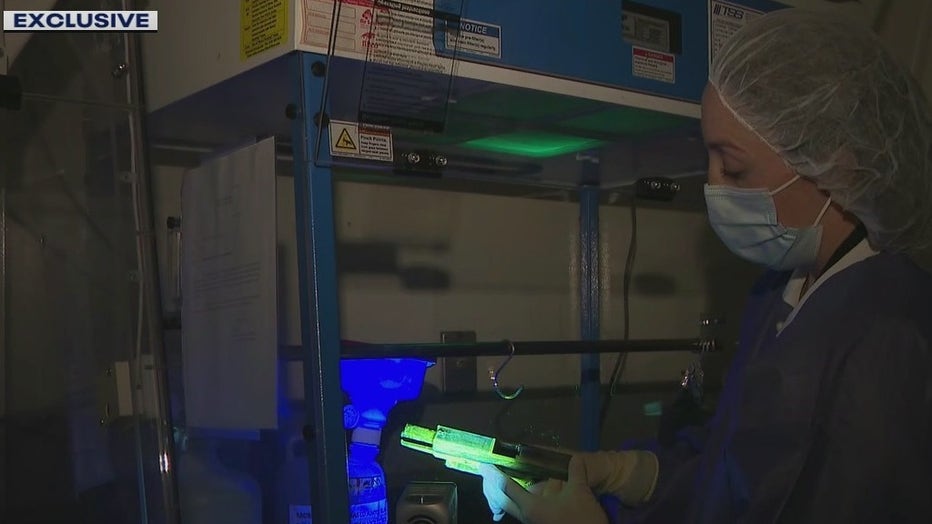 Another important step is to determine if the gun can actually fire live rounds.

"It's important to determine that because a firearm or rifle or any gun that is operable is actually a higher charge," Detective Nicolas Grenier said.

At the test firing range inside the lab, Katranakis explained why they have a stack of weapons on a table.

"Quite often we want to go back and look at what we call a reference gun for comparison,' he said. "So if a firearm comes in that is unusual or there are certain parts we want to examine more closely, we can see if they are original parts made by the manufacturer or not."

Capt. Matthew Strong demonstrated firing a handgun into a special tank, which captures the bullet and the shell casing.

"We fired into the tank, the bullet is now in the tank, and we recovered the shell casing from the netting here as it was ejected from the firearm," Strong said. 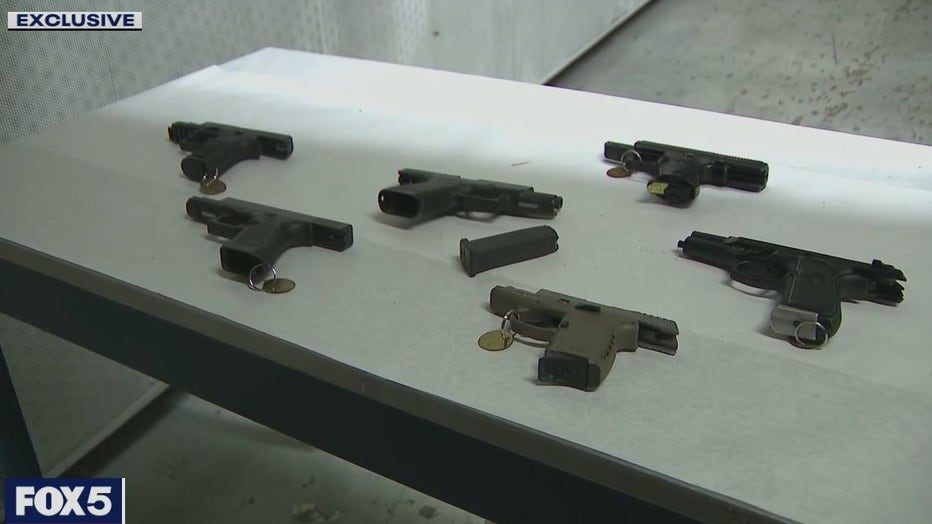 The NYPD keeps a stock of firearms at the crime lab to use for reference in its investigations. (FOX 5 NY Photo)

Every bullet tells a story leading investigators closer to those responsible for the crime.

"The bullet can be compared to other bullets from other shootings and the shell casing as we will see in a few minutes," Strong said. "That will be entered into the NIBIN system for comparison to other shell casings from other scene evidence or evidence from other areas."

With gun trafficking across state lines on the rise, the NYPD works closely with the Bureau of Alcohol, Tobacco, Firearms and Explosives, or ATF, which is part of the U.S. Justice Department. The ATF's National Integrated Ballistic Information Network, or NIBIN, is a database that speeds up investigations, such as the one regarding a Ruger 9 mm handgun. A 14-year-old boy brought the loaded gun into a New York City public high school. Using NIBIN, investigators discovered it was used in three separate shootings.

The NYPD says many of the shootings in the city are connection to gangs.

ATF Group Supervisor James Liscinsky told me how it works.

"We have over 4.5 billion pieces of evidence in the system, so we use that. If it matches up to the shootings, it gives us our leads," Liscinsky said. "Then with our trace system we identify where the gun was purchased — as we say, where it was born — and we match it up to the first shooting."

Technology will continue to improve and help investigators but the detectives of the crime lab say nothing substitutes for experience and the fast, accurate processing of evidence.