RICHMOND, Va. (AP) - In the tiny town of Lawrenceville, Virginia, a van owned by Poplar Mount Baptist Church was knocked out of commission for weeks after thieves cut the catalytic converter out of its exhaust system.

Several months later, across town, a catalytic converter was ripped from a van owned by First Baptist Church.

Similar crimes followed, targeting a total of 15 church vans and 13 other vehicles in town, part of a nationwide surge in thefts of catalytic converters.

Thefts of the exhaust emission control devices have jumped over the past two years as prices for the precious metals they contain have skyrocketed. Thieves can expect to get anywhere from $50 to $300 if they sell the converters to scrap yards, which then sell them to recycling facilities to reclaim the precious metals inside, including platinum, palladium and rhodium.

For victims, the costs of replacing a stolen catalytic converter can easily top $1,000 and make their vehicle undrivable for days or weeks as the part is ordered and installed. It can also leave owners feeling vulnerable.

"Just to feel that the church property was invaded by thieves was disheartening," said John Robinson, a member of Poplar Mount Baptist Church.

Robinson said replacing the stolen converter cost about $1,000. The theft was covered by insurance, but the church had to pay its $250 deductible and was unable to use the van for six weeks as it sat in a mechanic's yard waiting for a new part.

The National Insurance Crime Bureau said the number of catalytic converter thefts reported in claims to insurance companies jumped from 3,389 in 2019 to 14,433 in 2020. NICB President David Glawe said there has been a significant increase in thefts since the beginning of the COVID-19 pandemic.

"It’s an opportunistic crime," Glawe said in a statement. "As the value of the precious metals contained within the catalytic converters continues to increase, so do the number of thefts of these devices. There is a clear connection between times of crisis, limited resources, and disruption of the supply chain that drives investors towards these precious metals."

The increase in thefts has prompted states across the country to toughen penalties and impose new requirements for scrap metal dealers who buy the converters. Ten states enacted new legislation in 2021, including laws in Arkansas, South Carolina and Texas that require scrap metal buyers of used converters to maintain records of purchases, including proof of ownership, vehicle identification numbers, the seller's home address and driver's license numbers, according to the insurance crime bureau.

In North Carolina, a law that went into effect Dec. 1 makes catalytic converter thefts a Class I felony and requires businesses that buy used catalytic converters to get documentation and maintain detailed records on people who sell the devices to them. 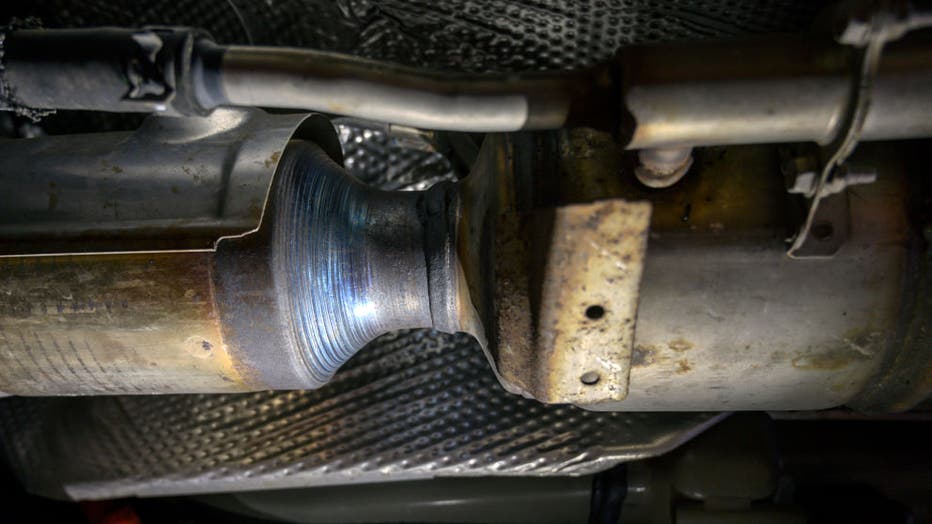 Catalytic converters, like this one, are being stolen for the precious metals they contain. (Photo by Mindy Schauer/Digital First Media/Orange County Register via Getty Images)

A bill modeled after the North Carolina law will be introduced in Virginia when the legislature reconvenes in January. The measure would make the theft of a catalytic converter a felony and presume that anyone in possession of one that's been removed from a vehicle has obtained it illegally unless the person is an authorized scrap seller or has a bill of sale, receipt or other documentation.

"It would make it more risky for the thieves to steal them," said Sen. Frank Ruff Jr., who is sponsoring the bill. "The sellers would have to show more identification, and then at the same time, the salvage dealer would not want to get in trouble so he'd be less likely to allow them to sell to him."

Brunswick County Sheriff Brian Roberts, who has seen the number of thefts in his rural area grow from seven to nine annually to 28 this year, said converters can be stolen in minutes. Thieves need only crawl under a vehicle and use a battery-operated reciprocating saw to cut through the metal and remove the part, he said.

In Henrico County, where about 540 catalytic converters have been reported stolen this year, police have produced public service announcements to raise awareness.

David Overby, owner of Auto Repairs Plus, said he spent more than $5,000 on lighting and a security system with cameras after thieves repeatedly stole catalytic converters off his customers' cars in his parking lot. Overby said police arrested two people caught on his cameras stealing converters, but he said under the current law, they were only charged with a misdemeanor.

"These people have got to be held accountable in some way, not given a slap on their wrist," Overby said.

At Chesterfield Auto Parts, where customers can pull parts from junked cars, owner Troy Webber said his workers remove catalytic converters before the vehicles are made available to the public, then lock the devices in steel containers before selling them to auto recyclers. That doesn’t stop thieves from trying to break in, he said.

"People cut through our fence constantly to try to steal the catalytic converters," he said.

"It's definitely something we have to get a hold of because it's causing a lot of families and a lot of people some heartburn," English said. "It's not something people deserve to have happen to them."