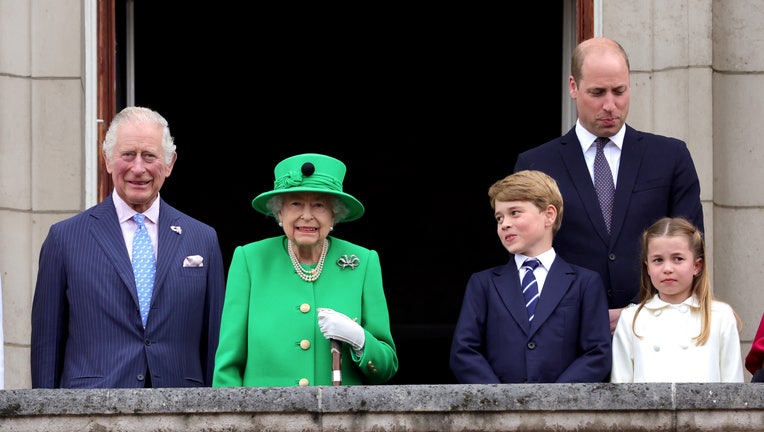 Prince Charles, Prince of Wales, Queen Elizabeth II, Prince George of Cambridge, Prince William, Duke of Cambridge and Princess Charlotte of Cambridge stand on the balcony during the Platinum Pageant on June 05, 2022 in London. (Photo by Chris Jackso

LONDON - In a crowning moment for her Platinum Jubilee, Queen Elizabeth II waved at tens of thousands of adoring crowds from the balcony of Buckingham Palace on Sunday, delighting fans who had hoped to catch a glimpse of her during the final day of festivities marking the monarch’s 70 years on the throne.

The 96-year-old monarch has curtailed her schedule in recent months due to difficulties in moving around. Prior to Sunday, the queen had only appeared in public twice — both on Thursday — during the four-day holiday weekend's celebrations. Officials said she experienced "discomfort" during those events.

Huge crowds that lined the Mall outside the palace for the climax of a boisterous, colorful pageant cheered as the monarch emerged on the balcony with Prince Charles, his wife Camilla, and Prince William and his family.

It was an image for the history books and a glimpse into the monarchy's future, with the queen's three heirs — her 73-year-old son Charles, eldest grandson William and eldest great-grandson Prince George — by her side. 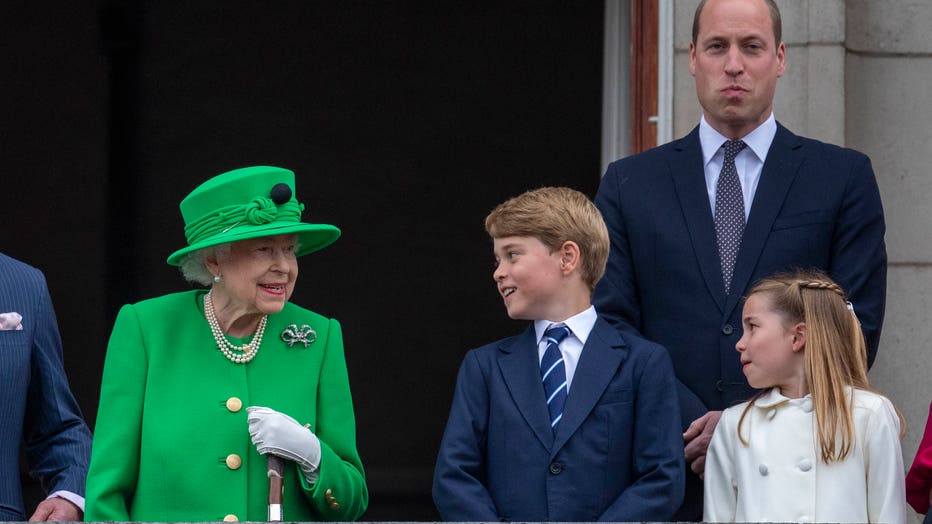 The queen, dressed in bright green, waved and smiled after the crowds belted out "God Save The Queen." Her appearance, which only lasted a few minutes, was followed by a crowd-pleasing performance of ABBA's "Dancing Queen."

It was an uplifting finale to a massive street pageant celebrating the queen's life and highlighting Britain's diversity. Thousands of people turned out on the streets of London, many speaking with excitement and pride about their queen and country.

"We were completely bowled over. We came over all patriotic and excited in a way that we didn’t think we were going to," said Veronica Timperley, 75, who watched with her daughter Kate.

Afterward, the monarch issued a statement thanking all those who celebrated her Platinum Jubilee.

"When it comes to how to mark seventy years as your Queen, there is no guidebook to follow. It really is a first," she said. "But I have been humbled and deeply touched that so many people have taken to the streets to celebrate my Platinum Jubilee.

"While I may not have attended every event in person, my heart has been with you all; and I remain committed to serving you to the best of my ability, supported by my family."

Sunday's pageant began with a spectacular military parade featuring 200 horses marching down the Mall to Buckingham Palace. They flanked the gold state coach, a gilded carriage that transported the queen to her coronation 69 years ago. A virtual version of her, taken from archival video from her 1953 coronation, was shown at the coach’s windows.

After the pomp and pageantry came a melange of acts celebrating the diversity of modern Britain and the Commonwealth, from hip hop and Bollywood dancers to drag queens and Mardi Gras style floats.

Some 6,000 performers paraded along a three-kilometer (nearly two-mile) route lined with a sea of Union flags, telling the story of the queen's life with dance, vintage cars, vibrant costumes, carnival music and giant puppets.

Some of Britain's best-loved cultural exports were here, from the Daleks in "Doctor Who" to James Bond's sleek Aston Martins. Celebrities including singer Cliff Richard danced and sang from open-top double decker buses designed to represent the sights and sounds of each decade, beginning with the 1950s.

"It’s a massive honor to be part of this. We’ve got the best queen in the world, don’t we? Best country in the world," said Warren Jobson, a biker who took part in the parade.

The pageant was watched by an estimated 1 billion people around the world, organizers say.

The keenest royal fans braved the wet, chilly weather and camped out on the Mall overnight to secure the best view of the pageant. Some came to see the celebrities who performed — like Ed Sheeran, who sang his song "Perfect" while a huge video screen showed pictures of the queen and her family — while others just wanted to be part of a historical moment.

"It’s part of history, it’s never going to happen again. It’s something special, so if you are going to do it you’ve got to go big or go home," said Shaun Wallen, 50.

The queen did not join her family in the royal box watching the pageant. Nor did Prince Harry and his wife, Meghan, who made their first family trip to the U.K. since they stepped away from royal duties and moved to the U.S. in 2020. The couple came to the U.K. for the big holiday weekend, but largely stayed out of the limelight.

Thousands of people ran out into the Mall after the parade ended Sunday in a bid to see the queen, filling the enormous expanse within minutes.

On Saturday, the monarch delighted the country when she appeared in a surprise comedy video that opened an evening concert in front of Buckingham Palace. In the video, the monarch had tea with a computer-animated Paddington Bear — a beloved children's character in the U.K. She revealed that, just like the furry bear, she was partial to marmalade sandwiches and liked to keep them in her handbag.

Charles highlighted his mother's role as a symbol of unity and stability through the decades at the concert. Addressing the queen as "Your Majesty, mummy," Charles said: "You laugh and cry with us and, most importantly, you have been there for us for these 70 years." 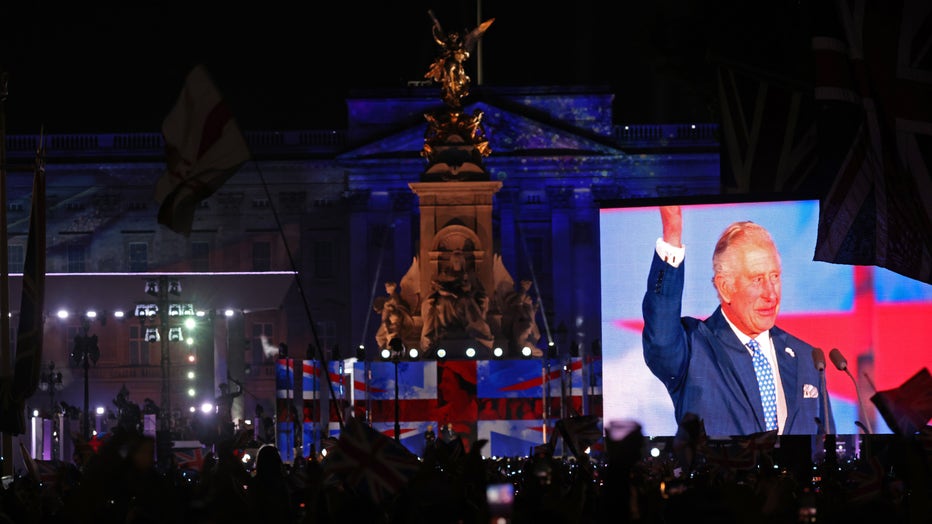 LONDON, ENGLAND - JUNE 04: Prince Charles, Prince of Wales speaks to the crowd the Platinum Party At The Palace concert outside Buckingham Palace on June 4, 2022 in London, United Kingdom. (Photo by Hollie Adams/Getty Images)

Millions of people across the country marked the occasion with patriotic street parties and barbeques, lining streets with long tables, balloons and picnic fare. On Sunday, Charles and Camilla mingled with the crowd at The Oval cricket ground in London for a "Big Jubilee Lunch."

Veteran David Godwin, who was celebrating at a street party in central London, said the queen has "brought us together again."

"She reflects the country and right now the country is buzzing and we’re on a high," he said.