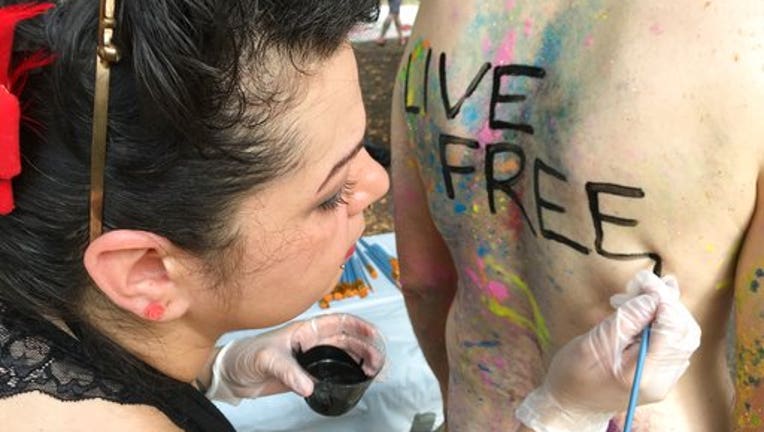 In this Sept. 10, 2016, file photo, artist Nicole Tossas paints a slogan on the back of a bicyclist before the annual Philly Naked Bike Ride in Philadelphia. (AP Photo/Dino Hazell, File)

PHILADELPHIA (AP) - The coronavirus pandemic has slammed the brakes on this year's Philly Naked Bike Ride.

The annual event, which usually draws thousands of nude cyclists for a trip around Philadelphia and its tourist sites, had been set for later this month. But organizers who had been gearing up for it said the city's COVID-19 cases made them halt their planning.

“After much debate, we feel that cancelling this year’s event is the most responsible thing to do,” they said on their website.

But they had a message for would-be naked riders eager to break free of their home lockdowns: They hope to be back riding in 2021.

“We hope to see you next year, hopefully under better and healthier circumstances," they said. "Keep up your (socially distant) riding and be safe.”

Ride organizer Maria Serrahima said canceling this year was “the safest bet" because of the highly contagious and deadly virus. Still, she said on Friday she hopes people are “taking advantage of the emptier streets and riding — masks up.”

The naked ride is to promote positive body image, advocate for the safety of cyclists and protest dependence on fossil fuels. Riders pedal a 10-mile (16-kilometer) course while taking in sights including Independence Hall, the Liberty Bell and the Philadelphia Museum of Art’s steps, featured in the “Rocky” movies.

The 12th Philly Naked Bike Ride had been scheduled for Aug. 29. The ride used to be held in September, often in temperatures around 70 degrees Fahrenheit (21 degrees Celsius), but enough of the naked riders mentioned feeling chilly that, last year, it was moved up to August.