Authorities are investigating the possibility that a young child playing with a lighter may have ignited a Christmas tree that sparked a deadly rowhome fire in Fairmount.

PHILADELPHIA - Investigators are looking into the possibility that a 5-year-old child who was playing with a lighter set a Christmas tree on fire, sparking a conflagration that killed 12 people in a Philadelphia rowhome, according to a warrant.

The revelation was included in a search warrant application as city and federal investigators sought to determine the cause of the city’s deadliest single blaze in more than a century, which took the lives of two sisters, several of their children and others early Wednesday.

Jane Roh, spokesperson for District Attorney Larry Krasner, confirmed the contents of the search warrant, which was first reported by The Philadelphia Inquirer.

Fire officials provided few details at an afternoon news briefing, declining to say how many people escaped the blaze or speculate on a possible cause, adding the fire scene was complex. Officials also did not say where the fire began, calling it part of the investigation.

"I know that we will hopefully be able to provide a specific origin and cause to this fire and to provide some answers to the loved ones and, really, to the city," said Matthew Varisco, who leads the Philadelphia branch of the federal Bureau of Alcohol, Tobacco, Firearms and Explosives. ATF specialists and other investigators took photos and combed through the charred, three-story brick duplex.

The building is owned by the Philadelphia Housing Authority, the city’s public housing agency and the state’s biggest landlord.

Fourteen people were authorized to live in the four-bedroom upper apartment that "suffered the tragedy," according to Kelvin Jeremiah, the housing authority's president and CEO, while six people were on the lease in the lower unit.

When the family upstairs became tenants in 2011, there were six people — a grandmother, her three daughters and two of their children, Jeremiah said. He said the family grew over the next decade to add another eight children.

PHA "does not evict people because they have children," Jeremiah said.

Jenn Frederick learns more about the response to Wednesday's fire and how firefighters will process the tragedy.

"This was an intact family who chose to live together. We don’t kick out our family members ... who might not have other suitable housing options," he said.

Jeremiah, who struggled to keep his composure at times, said the authority has reached out to the surviving family members from both units to help rehouse them.

The fire department previously said none of the four smoke alarms in the building appeared to have been working. But housing authority officials said Thursday the building actually had 13 tamper-resistant, 10-year detectors in the units, all of which were operational during the last inspection in May 2021.

The residential block remained eerily quiet earlier Thursday, with the exception of a trash truck that rumbled down the street. Few residents were out and about.

The Philadelphia school district said counseling and support services were available for students and staff "grieving this unimaginable loss." The city’s emergency management office opened up a support center for friends and relatives at an elementary school that one of the victims attended.

At least two people were hospitalized and some others managed to escape from the building, officials have said. Officials said Wednesday that 26 people were staying in the two apartments. The city's fire marshal, Deputy Chief Dennis Marrigan, said Thursday that investigators were seeking to determine how many people lived in the building and how many might have just been visiting. 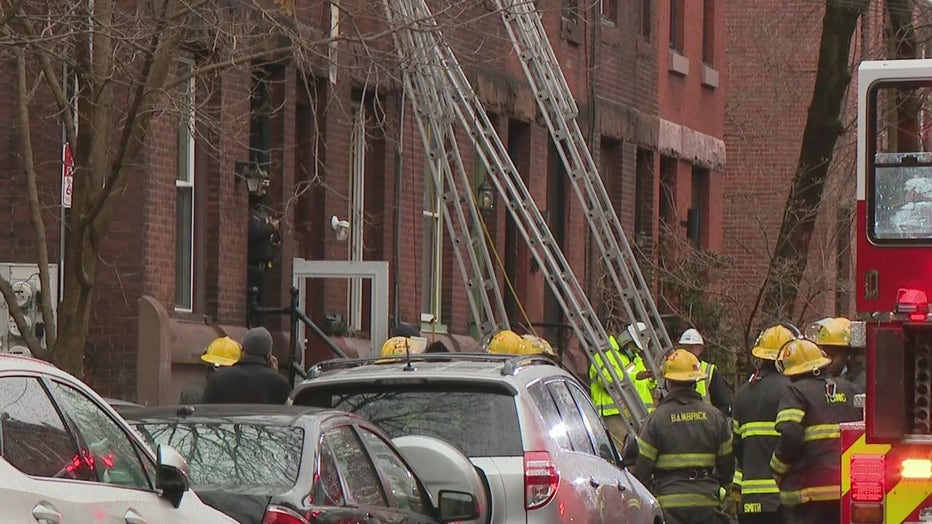 Sources say the fire is believed to have started on the second floor.

Marcia Fudge, secretary of the U.S. Department of Housing and Urban Development, expressed condolences on Twitter and said HUD had been in touch with city leaders and "stands ready to support the community in any way possible." HUD investigators were in the city on Thursday, according to Marrigan.

Officials did not release the names or ages of those killed in the blaze, which started around 6:30 a.m. Wednesday.

Family members on Facebook have identified two of the victims as sisters Rosalee McDonald, 33, and Virginia Thomas, 30. The siblings each had multiple children, but it’s unclear if all of them were home at the time of the fire or how many of them died. Messages were left with several people who said they knew or were related to the victims.

Wednesday’s blaze was the deadliest fire at a U.S. residential apartment building since 2017, when 13 people died in an apartment in the Bronx neighborhood of New York City, according to data from the National Fire Protection Association. That fire started after a 3-year-old boy was playing with stove burners.

Prior to that, the deadliest fire in an apartment building was in 1982 in Tennessee. Sixteen people died in that blaze, NEPA data showed.