LOS ANGELES - Democratic presidential candidate Pete Buttigieg took questions on some of the biggest issues of the 2020 race during an exclusive town hall hosted by FOX 11 at the University of Southern California on Thursday, just one day after a fiery debate in Las Vegas that saw Democratic candidates in a high-stakes tussle ahead of the Nevada caucus.

The event was moderated by Elex Michaelson, the host of FOX 11’s political show “The Issue Is.” 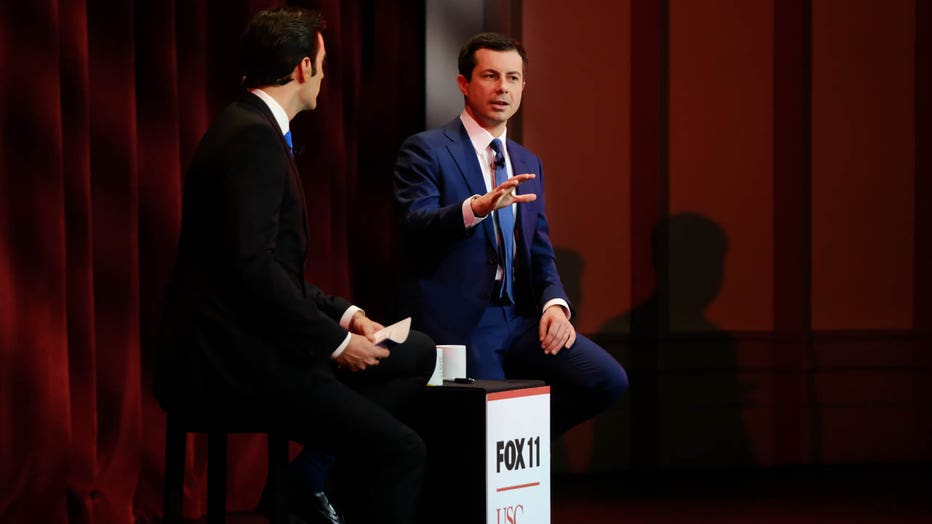 Early into the town hall, Buttigieg spoke on Bernie Sanders' and Mike Bloomberg's electability, what is wrong with American politics, and how Democrats need to come together around shared values.

When fielding a question from the audience, Buttigieg spoke about the struggles faced by Latino voters and voters of color under President Donald Trump's policies. The candidate noted that sometimes he gets it wrong, but is committed to making sure diverse voices are reflected in every step of campaign process.

Buttigieg highlighed his experience living and working in the industrial Midwest and how that helps qualify him to take on Trump in the election. The candidate also noted how his measure of a good economy is the income of the 90 percent. "If we really want a strong economy, we have to ensure it is working for all of us," Buttigieg said.

Michaelson asked Buttigieg when, growing up, how he think seeing an openly gay presidential candidate would have impacted him. "To see somebody able to do that, I think it would have changed my entire understanding of how I see the world," the candidate said.

One audience member asked a question regarding Buttigieg's donor policies and how voters can be sure of where his support is coming from. "I'm not going to define my campaign by whose help I reject," Buttigieg said in his response.

Buttigieg also noted how his husband Chasten would be known as the "First Gentleman" if he were to win the election. The candidate was also asked by an audience member about voters who agreed with his policies but did not approve of his sexuality. "Most people will judge not just based on who you are and how you present, but the difference you have made for them or the difference you are going to make for them in their lives," Buttigieg said.

When asked by Michaelson about what gets him frustrated, Buttigieg noted items like how people treated each other, the state of our country, the tone of our politics, and lack of empathy and consideration.

Responding to Michaelson's question about the federal government's repsonsibility in addressing homelessness, Buttigieg said it needs to recognize the issue as an emergency and have a FEMA-like response, help families on the brink of homelessness with direct support, and understand that homelessness cannot be weaponzied as a political tool but should be recognized as a human crisis.

Asked by an audience member on how he would combat poverty in rural communities, Buttigieg highlighted the need of raising the minimum wage and supporting communities themselves. The candidate also spoke on the need for preparing people for technology better in anticipation of automation in the future.

Discussing universal basic income, Buttigieg said the idea should be taken seriously, but acknolwedged that it's something that lets us "off the hook," and the government needs to be making different policies that empower workers.

Buttigieg noted that for college students who want to make a difference in politics, they should find something they care about and look for a way to make a difference. Responding to another audience question, Buttigieg said how poverty is an issue that is not being talked enough by candidates.

Buttigieg’s California town hall with FOX 11 comes in the aftermath of a tense Democratic debate Wednesday in which fiery rhetoric was unleashed from all sides by the six candidates on stage in Las Vegas.

Buttigieg, the former mayor of South Bend, Indiana, went after billionaire Mike Bloomberg and Vermont Sen. Bernie Sanders, warning that one threatened to “burn down” the Democratic Party and the other was trying to buy it.

He called them “the two most polarizing figures on this stage," with little chance of defeating Trump or helping congressional Democrats in contests with Republicans.

And ongoing animosity flared between Buttigieg and Minnesota Sen. Amy Klobuchar when the former Indiana mayor slammed the three-term Minnesota senator for failing to answer questions in a recent interview about Mexican policy and forgetting the name of the Mexican president.

Buttigieg noted that she's on a committee that oversees trade issues in Mexico and she “was not able to speak to literally the first thing about the politics of the country.”

She shot back: "Are you trying to say I'm dumb? Are you mocking me here?"

Later in the night she lashed out at Buttigieg again: “I wish everyone else was as perfect as you, Pete.”

The once little-known former mayor of a midsize Midwestern city vaulted over a former vice president and several U.S. senators in the Iowa caucuses and New Hampshire presidential primary. The 38-year-old's fresh face, intellect and turn-the-page message won votes across many demographic groups in the kickoff states.

Now the promise of his candidacy is colliding with the reality of the central question about his viability: Can he win among minority voters who form the critical foundation of the party’s base?

That will be tested Saturday in Nevada, with a diverse blend of Latinos and African Americans, but especially in South Carolina, where two-thirds of the primary electorate could be black voters, the base of the Democratic Party that Buttigieg has struggled to attract.

Buttigieg's strategy is to earn a fresh look from black and brown voters by flashing his support in the first two contests, drawing on the validation of minority leaders who have endorsed him and leveraging the personal networks of his supporters.

With the South Carolina primary rapidly approaching Feb. 29, he could face a steep climb.