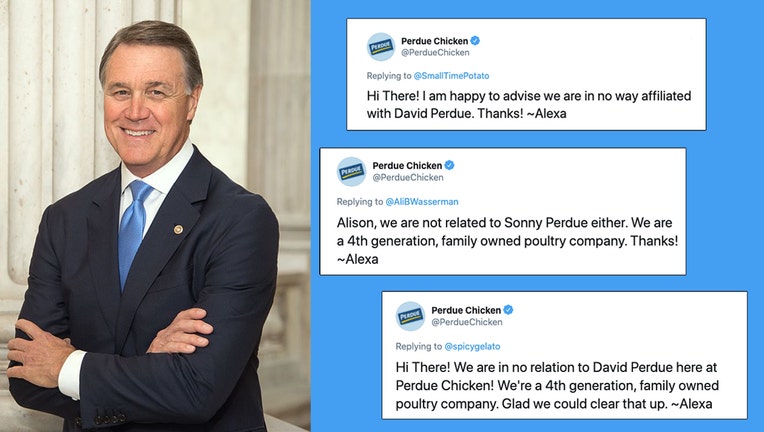 Maryland-based Perdue Chicken went on a social media blitz to clarify that the brand is not connected to Sen. David Perdue, R-Ga., after the senator faced criticism for mispronouncing Democratic vice presidential nominee Kamala Harris' name.

The company sent out dozens of tweets this weekend after Twitter users baselessly accused the company of being racist. Perdue Chicken's account responded to posts, including those that did not link the senator with Perdue Farms, with variations of "Hi There! We are in no way connected to David Perdue. Thanks!"

"Kamala? Or Kamala? Kamal-mala-mala. I don't know. Whatever," Perdue said as he changed the intonation of Harris' name at President Trump's rally in Macon, Ga., on Friday.

Perdue said on Saturday he "meant no disrespect" with his pronunciation of Harris' name.

"I absolutely meant no disrespect to the Senator from California," he said. "My role in this is to point out the differences in what their agenda is and what our agenda is. A lot of Democrats will do or say anything right now to hide their radical, socialist agenda."

Perdue Chicken dispelled the myth that Sen. Perdue and his cousin, Agriculture Secretary Sonny Perdue, are in any way connected to the brand.

"Hi! We are in no connection to David Perdue. We are a 4th generation, family owned poultry company. Glad we could clear that up," the company wrote in response to a user who said they planned to boycott.

"Georgia needs a leader who will unite us to defeat COVID-19, not a pathetic schoolyard bully who engages in a stunning and juvenile display of bigotry at a Trump rally," Ossoff said Saturday. "David Perdue should grow up, take responsibility for once in his career, admit he was wrong, and publicly apologize."