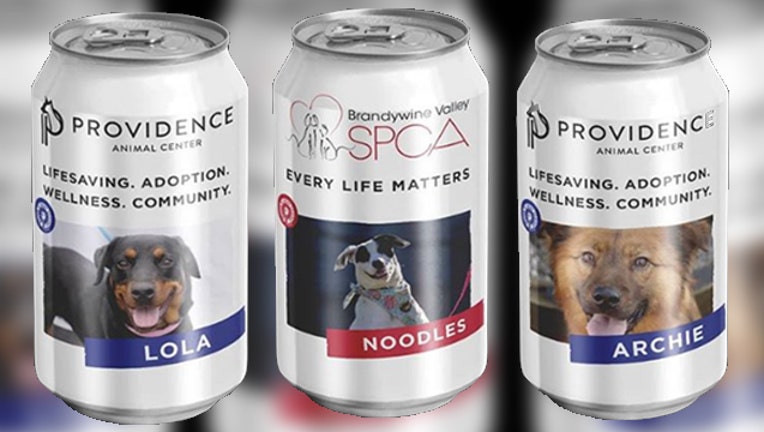 ALLENTOWN, Pa. - In an effort to help adoptable dogs find their forever homes, The Colony Meadery has teamed up with two Philadelphia area animal shelters.

The Colony Meadery, located in Allentown, is working with Providence Animal Center and the Brandywine Valley SPCA.

The idea was spearheaded by Spike Eskin and Mike Levin who were inspired by recent news of other brewing companies using similar methods.

“We were thrilled to be able to steal this incredible idea from the breweries who came up with it,” said Greg Heller-LaBelle, the CEO of The Colony Meadery. “We know seeing these faces on cans will help these good boys and girls find their forever homes.”

Brewing companies in North Dakota and Florida have recently plastered faces of adoptable dogs on their cans to varying degrees of success.

One campaign out of Florida made national headlines after a Minnesota woman saw a photo of her long-lost dog on one of the beer cans. Eventually, officials were able to return the lost dog to her owners.

"This sort of collaboration helps us reach a larger population of potential adopters, ones who may have never considered adoption. In essence, these cans are truly lifesaving.” Justina Calgiano, a spokesperson for the Providence Animal Center said.

The Colony Meadery specializes in creating gluten-free craft beverages from mead, which is quite different to the popularity of beer breweries.

The special cans will be released online on March 16. The public can buy them at The Colony Meadery on March 20.

A portion of the proceeds from the sales will also benefit the shelters.

Those interested in purchasing a pack of the mead to support this campaign sold by The Colony Meadery can do so by visiting the brewery’s website.