Pelosi announces she is ready to move impeachment articles to Senate

House Speaker Nancy Pelosi announced Friday that she will take steps next week to send impeachment articles to the Senate, after delaying the process since last month in a bid to extract favorable terms for a trial.

In a letter to her Democratic colleagues, Pelosi said she has asked Judiciary Committee Chairman Jerrold Nadler to be prepared to bring to the floor next week a resolution to appoint managers and transmit the articles of impeachment to the Senate.

“I will be consulting with you at our Tuesday House Democratic Caucus meeting on how we proceed further,” Pelosi wrote.

Pelosi has held on to the articles in a standoff with Senate Majority Leader Mitch McConnell.

The protracted showdown has scrambled the politics of impeachment and the congressional calendar three weeks after the House Democrats impeached Trump on charges of abuse and obstruction over his actions toward Ukraine. 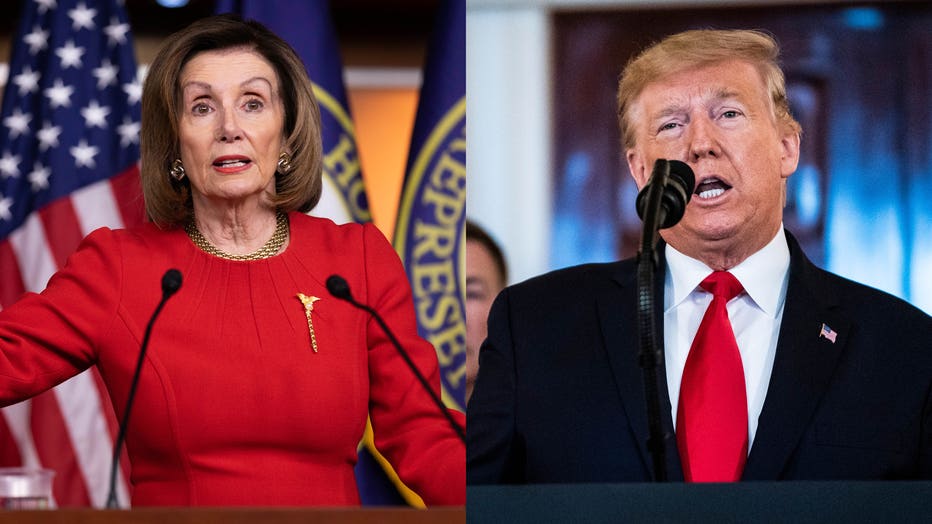 U.S. House Speaker Nancy Pelosi, D-Calif, speaks during her final weekly news conference of 2019 at the U.S. Capitol on Dec. 19, 2019, alongside President Donald Trump addressing the nation from the Grand Foyer at the White House on Jan. 8, 2020. (Ph

Transmittal of the documents and naming of House impeachment managers are the next steps needed to start the Senate trial. Pelosi indicated she may be communicating to her colleagues, as she often does with a letter on her thinking.

McConnell wants to launch a speedy trial without new witnesses but Pelosi is warning against a rush to acquit the president.

Pelosi, D-Calif., faces mounting pressure to act. Republicans say Democrats are embarrassed by their vote. But Pelosi countered that Democrats are ’’proud″ of upholding the Constitution and said she doubted that Senate Republicans will do the same.

Many on Capitol Hill expect the Senate impeachment trial to begin next week.

“I’ll send them over when I’m ready. That will probably be soon,” Pelosi told reporters at the Capitol Thursday, noting she is not postponing it “indefinitely.″

The House impeached Trump in December on the charge that he abused the power of his office by pressuring Ukraine’s new leader to investigate Democrats, using as leverage $400 million in military assistance for the U.S. ally as it counters Russia at its border. Trump insists he did nothing wrong, but his defiance of the House Democrats’ investigation led to an additional charge of obstruction of Congress.

Pelosi’s delay in sending the articles of impeachment over for a Senate trial has led to a standoff with Senate Majority Leader Mitch McConnell, R-Ky., over what would be the third impeachment trial in the nation’s history.

McConnell said that if Pelosi and House Democrats are “too embarrassed″ to send the articles of impeachment, the Senate will simply move on next week to other business.

“They do not get to trap our entire country into an unending groundhog day of impeachment without resolution,” McConnell said.

McConnell told GOP senators at a lunchtime meeting to expect the trial next week, according to two people familiar with his remarks. The people requested anonymity to discuss the private meeting.

At the same time, McConnell signed on to a resolution from Sen. Josh Hawley, R-Mo., to allow for the dismissal of articles of impeachment if the House doesn’t transmit them in 25 days. That change to Senate rules appears unlikely to happen before Pelosi transmits the articles.

In the weeks since Trump was impeached, Democrats have focused on new evidence about Trump’s effort to pressure Ukraine to investigate his political rivals and they pushed the Senate to consider new testimony, including from former White House national security adviser John Bolton. Republicans are just as focused on a speedy trial with acquittal.

Republicans have the leverage, with a slim 53-47 Senate majority, as McConnell rebuffs the Democratic demands for testimony and documents. But Democrats are using the delay to sow public doubt about the fairness of the process as they try to peel off wavering GOP senators for the upcoming votes. It takes just 51 senators to set the rules.

“When we say fair trial, we mean facts, we mean witnesses, we mean documents,” said Senate Minority Leader Chuck Schumer, D-N.Y., promising votes ahead. “Every single one of us, in this Senate, will have to have to take a stand. How do my Republican friends want the American people, their constituents, and history to remember them?”

Trump weighed in from the White House suggesting that he, too, would like more witnesses at trial. They include former Vice President Joe Biden, who is seeking the Democratic presidential nomination now, and his son Hunter, as well as the government whistleblower whose complaint about the president’s pressure on Ukraine sparked the impeachment investigation.

On a July telephone call with Ukraine’s new president, Trump asked his counterpart to open an investigation into the Bidens while holding up military aid for Ukraine. A Ukrainian gas company had hired Hunter Biden when his father was vice president and the Obama administration’s point man on Ukraine. There is no evidence of wrongdoing by either Biden.

Trump suggested that his administration would continue to block Bolton or others from the administration from appearing before senators. Many of those officials have defied congressional subpoenas for their testimony.

“When we start allowing national security advisers to just go up and say whatever they want to say, we can’t do that,” Trump said during an event with building contractors. “So we have to protect presidential privilege for me, but for future presidents. That’s very important.”

Bolton, one of four witnesses that Democrats have requested, said this week that he would testify if subpoenaed.

McConnell has said from the start he is looking to model Trump’s trial on the last time the Senate convened as the court of impeachment, for President Bill Clinton in 1999. McConnell has said there will be “no haggling” with House Democrats over Senate procedures.

“There will be no unfair, new rule rule-book written solely for President Trump,” McConnell said Thursday.

McConnell, who met with Trump late Wednesday at the White House, suggested last month it would be “fine with me” if the House never sent the articles. More recently, he has drawn on the Constitution’s intent for the Senate to have the ultimate say on matters of impeachment. He scoffed that Pelosi has ‘’managed to do the impossible” by uniting Democrats and Republicans who want the trial to begin.

Some Democrats have been showing increased anxiety over the delay as Americans remain divided over Trump’s impeachment.

The delay on impeachment has also upended the political calendar, with the weekslong trial now expected to bump into presidential nominating contests, which begin in early February. Several Democratic senators are running for the party’s nomination .

One 2020 hopeful, Sen. Cory Booker, D-N.J., told The Associated Press’s Ground Game podcast that a looming impeachment trial and other pressing issues in Washington could deal a “big, big blow” to his presidential campaign by keeping him away from Iowa in the final weeks before the Feb. 3 caucuses.

As Pelosi dashed into a morning meeting at the Capitol, she was asked if she had any concerns about losing support from Democrats for her strategy. She told reporters: “No.”

“I know exactly when” to send the impeachment articles over, Pelosi said. “I won’t be telling you right now.″

Pelosi is seeking what she says she wanted from the start — “to see the arena” and “terms of the engagement” that McConnell will use for the trial — before sending her House managers to present the articles of impeachment in the Senate. She has yet to choose the managers, a source of political intrigue as many lawmakers want the high-profile job.