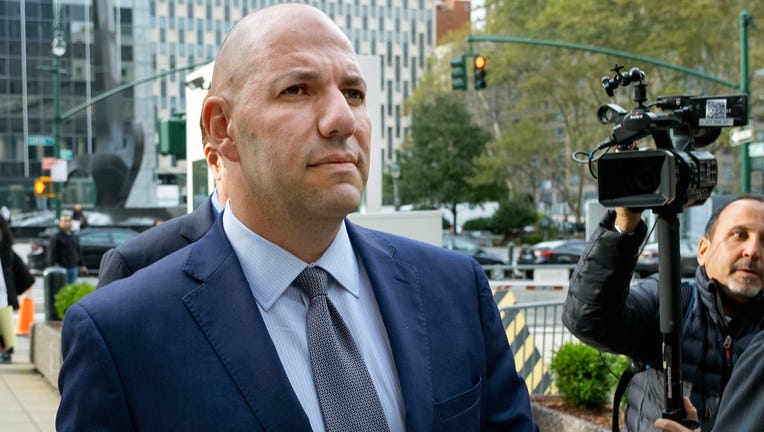 NEW YORK - A Florida businessman whose fraud-busting business was exposed as a fraud itself was sentenced Monday to a year and a day in prison in a case in which prosecutors said Rudy Giuliani was hired as a consultant to attract investors.

The judge cited Correia's lesser role in the fraud scheme — he was charged alongside co-defendant Lev Parnas — and medical issues that might make his time in prison more challenging as he granted requests for leniency. He also ordered Correia to pay back the roughly $43,000 he received illegally, as well as over $2 million in restitution.

Oetken noted that two of seven victims had urged leniency, though he said it was "hard to ignore" the irony of a fraud surrounding a business titled "Fraud Guarantee."

In October, Correia pleaded guilty to making false statements to the Federal Election Commission and conspiring to commit wire fraud. The plea came in connection with $2.3 million raised for the company that was supposed to protect investors in businesses from becoming fraud victims.

Before the sentence was announced, Correia told Oetken he's tried to be a better father and husband since his arrest.

"I feel true remorse," he said.

In court papers, Correia largely blamed his slide into criminal behavior on his association with Parnas.

Parnas has pleaded not guilty to charges related to Fraud Guarantee and other charges alleging he made illegal contributions to politicians he thought could aid his political and business interests.

The prosecution generated headlines after Parnas and another co-defendant worked with Giuliani to try to get Ukrainian officials to investigate the son of then-Democratic presidential candidate Joe Biden. Giuliani has said he knew nothing about contributions by the men. He has not been charged.

Assistant U.S. Attorney Nicolas Roos had urged a sentence of about three years in prison for Correia, which was what federal sentencing guidelines suggested.

The prosecutor said Correia was essentially "the closer" in conversations with investors and "bragged about his lavish lifestyle" with at least one investor.

In court papers, prosecutors noted that Correia also bragged about the involvement of Giuliani as a consultant in the company, enticing one investor who seemed thrilled at Giuliani's involvement to contribute $500,000.

Prosecutors said Correia told the investor that Giuliani had agreed that his likeness could be used as the "face of the company."

Giuliani, a former New York City mayor who served as ex-President Donald Trump's personal lawyer, has confirmed he was promised $500,000 to consult with the company. Prosecutors have not alleged Giuliani did anything wrong and he was only referred to in court papers and at the sentencing as "Attorney-1."

"He’s really a good person who did wrong," Harrington told the judge.