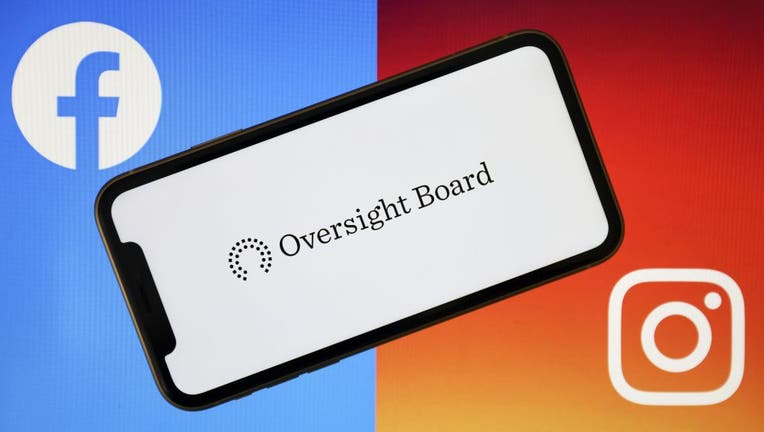 Oversight Board logo is seen on a smartphone with Facebook and Instagram logos in the background in Ankara, Turkey on May 07, 2020. (Photo by Hakan Nural/Anadolu Agency via Getty Images)

WASHINGTON - An oversight board upheld the suspension of former President Donald Trump from Facebook and Instagram on Wednesday but criticized the open-ended nature of the suspension.

Trump has been suspended from the platforms since Jan. 7, the day after a mob of his supporters engaged in a deadly riot at the Capitol.

The board, however, said it was not appropriate for Facebook to impose the indeterminate and standardless penalty of indefinite suspension.

The board says Facebook needs to figure out whether to permanently ban Trump or reinstate his account within six months.

Twitter made a similar move by deactivating Trump’s personal and presidential accounts. Initially, Twitter’s suspension was to last 12 hours. But two days after the Capitol riot, Twitter moved to make the ban permanent.

By upholding the suspension, the board has sided with Facebook for just the second time in the last six cases.

Following Trump’s ban, Conservatives criticized the social media industry, claiming Trump was being censored and his suspension was further proof of a bias against conservatives.

Many of Trump’s tweets and Facebook posts that contained inaccurate information about the COVID-19 pandemic or election results were marked as inaccurate or misleading in the months prior to his suspension.

Without access to his accounts, Trump has sought other means of keeping his thoughts available to the public. He’s maintained headlines by issuing news releases from "The Office of the Former President."

And just one day before the board upheld his suspension, Trump launched a new communications platform that allows him to post, and allows followers to share the former president’s posts to Twitter and Facebook.

The new platform is designed for one-way communication, so users cannot reply to the former president’s posts.