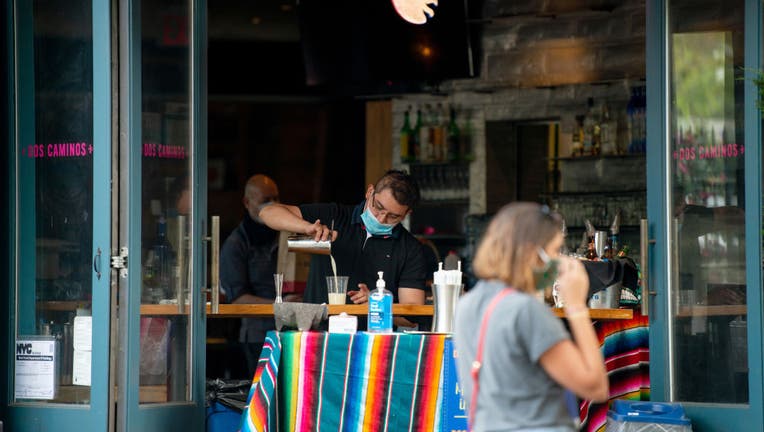 A restaurant employee wearing a mask pours an alcoholic drink into a plastic cup on May 31, 2020 in New York City. (Photo by Alexi Rosenfeld/Getty Images)

NEW YORK - Restaurants are about to reopen for outdoor dining in New York City but there are going to be some big changes.

Restaurants in New York City are in dire need of assistance since the COVID-19 pandemic. According to a May survey, 61 percent of establishments said that they could not operate at an occupancy below 70 percent, while a staggering 87 percent of restaurants said they could not make their rent that month.

“New York’s restaurants are part of what make us the greatest city in the world,” De Blasio said in a statement. “They’ve taken a hit in our fight against COVID-19 and there’s no recovery without them. Our Open Restaurants plan will help these businesses maximize their customer base while maintaining the social distancing we need to beat this crisis once and for all.”

The plan will include allowing restaurants in commercial corridors to serve patrons outdoors by converting parking spaces into seating areas or to create seating areas directly in front of their establishments if they are on one of the 45 miles of the city’s newly-designated Open Streets.

"Our restaurant owners need help now more than ever."

“Our restaurant owners need help now more than ever and have shared their concerns about traditional practices. This plan will enliven our commercial corridors and provide businesses with a much-needed opportunity to generate further revenue while maintaining safety,” said Jonnel Doris, Commissioner of the NYC Department of Small Business Services. “With the help of our partners and communities, we will work together to support our neighborhood businesses, which make New York thrive, and bring back our City safely and equitably.”

De Blasio originally ordered that all of New York City's all bars, restaurants, and cafes close on March 15. Locations were allowed to provide food take-out and delivery, along with allowing patrons to order alcohol to-go.