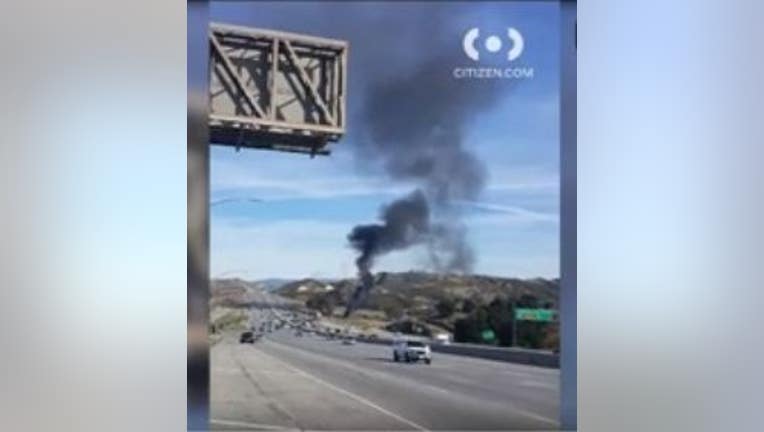 LOS ANGELES - One person is dead after a small plane crashed along the 14 Freeway in Santa Clarita Saturday morning.

The Los Angeles County Fire Department was dispatched to the scene around 10:12 a.m., and reported at 10:28 a.m. that it was a single-engine plane which caught fire.

The fire department said the aircraft had been completely destroyed.

The pilot was the only person inside the aircraft and was pronounced dead on scene, according to the Los Angeles County Sheriff's Department.

The pilot's name has not been released, but several aviation publications said he had been flying since the mid-1970s, was based at Van Nuys Airport and had more than 4,000 hours of flying time in aircraft similar to the one that crashed.

One of the pilot's friends, told reporters she heard his distress call, which was later posted on Twitter, where he can be heard complaining of visibility problems in the plane immediately prior to the crash. She described him as a "sweet and loving man'' who was very active
in the aviation community, and said his death was a "big loss.''

The plane crashed about five miles north of Van Nuys Airport, according to FAA spokesman Ian Gregor. The aircraft is described as a "homebuilt TM-1 Thunder Mustang,'' Gregor said. The Thunder Mustang is a three-quarter scale replica of a P-51 Mustang, a US World War II-era fighter plane, aviation experts said. Any homebuilt aircraft must be inspected by the FAA for airworthiness before its
first flight like any general aviation aircraft, according to FAA regulations.