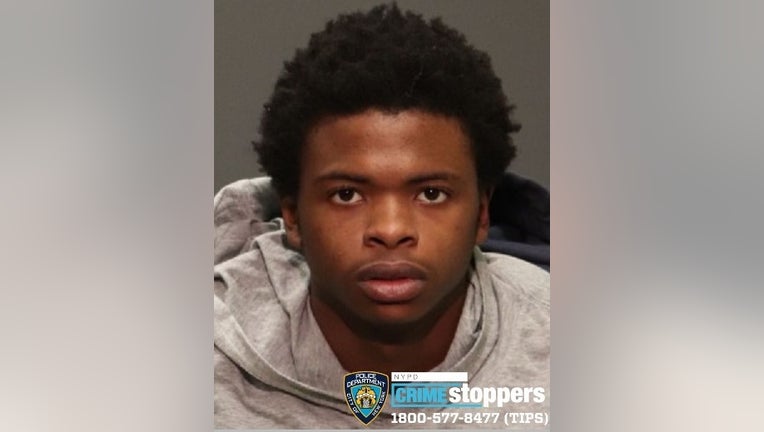 A photo of Omar Bojang, a suspect wanted in connection to the stray bullet killing of 11-year-old Kyhara Tay. (Credit: NYPD)

NEW YORK - The 18-year-old suspect being sought in the stray-bullet killing of an 11-year-old girl in the Bronx is also wanted for a pair of armed robberies, police say.

Authorities say that Omar Bojang, 18, took part in the pair of robberies last month. Both also occurred in the Bronx.

In the first incident, on April 18, a 46-year-old victim had arranged to purchase merchandise via an online selling platform when Bojang and three other suspects approached him. One of the suspects displayed a firearm and struck the victim in the head, while the others took his wallet containing credit and debit cards.

The suspects then fled the scene. There were no injuries reported.

Arrest in killing of 11-year-old in the Bronx

The NYPD announced that it has arrested one suspect and is on the hunt for another after a senseless shooting that claimed the life of an 11-year-old girl in the Bronx.

Then, on April 22, a 28-year-old man was also attempting to purchase merchandise via an online selling platform when Bojang and two other suspects approached him. Again, one of the suspects displayed a firearm and struck the victim in the head, while the others took his Samsung watch, a cell phone and a wallet containing $100.

The suspects then fled the scene. The victim suffered a laceration and bruising to his forehead, but refused medical attention.

RELATED: 15-year-old arrested in the killing of 11-year-old Kyhara Tay in the Bronx

Police say that Bojang was allegedly driving a scooter last Monday that the gunman who killed Kyhara Tay was a passenger on.