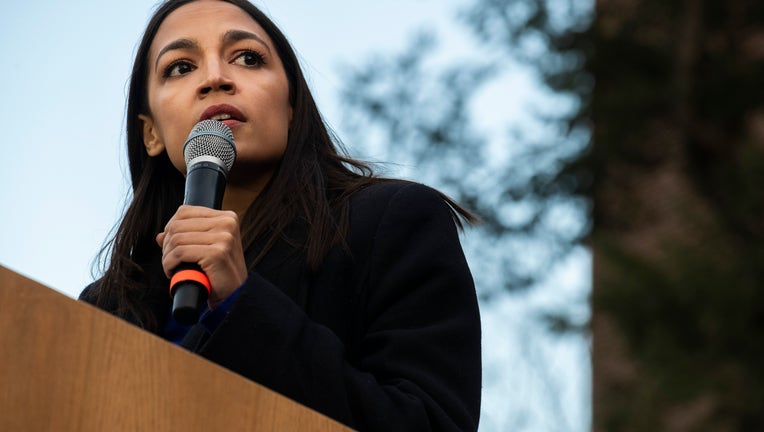 NEW YORK - It's Rep. Alexandria Ocasio-Cortez's turn to defend her record and battle accusations that she's lost touch with her district.

The out-of-nowhere winner of 2018′s most spectacular election upset, the New York Democrat faces a June 23 primary in which her chief rival, a former Republican, has adopted the mantra “AOC is MIA." The mighty U.S. Chamber of Commerce has launched a digital ad, with English and Spanish versions, asking why Ocasio-Cortez isn't supporting “good-paying jobs in the tech industry."

As Congress' youngest woman and one of its most recognizable faces, the 30-year-old former activist and bartender remains a heavy favorite to win. Yet with her hard-left views, her celebrity status and job losses that have staggered her New York City district during the coronavirus pandemic, her opponents say they sense weak spots.

“There’s a real contrast here between AOC’s record, what she’s done for the district, and this perception of her being this Hollywood glam girl,” said Scott Reed, the chamber's senior political strategist.

The congresswoman's campaign declined to make her available for an interview. Her pollster, Celinda Lake, said Ocasio-Cortez stands little chance of losing.

“They're out of touch with the district," Lake said of the chamber, the nation's largest business organization.

Ocasio-Cortez began airing a TV spot this week that underlines the importance of turnout in what's likely to be a low-turnout primary. “Listen, if we want change, we've also got to vote for it," she said.

“She knows how dangerous primaries can be and she's taking it seriously,” said Sean McElwee, who conducts research for progressive candidates.

The chamber and Michelle Caruso-Cabrera, Ocasio-Cortez's top challenger, are focusing chiefly on two things. One is Ocasio-Cortez's March vote against a $2 trillion economic relief package, the other her opposition to Amazon’s plan to build a jobs-rich headquarters in a Queens neighborhood in the district, which the company abandoned in 2019.

“She voted against the interests of my neighbors,” Caruso-Cabrera said in an interview, citing the bill’s money for the unemployed and small businesses. Congress approved the legislation.

Caruso-Cabrera has cast Ocasio-Cortez as a divisive elitist who ignores the district, which also covers parts of the Bronx. Caruso-Cabrera said that after Congress approved the coronavirus bill and the pandemic was ravaging New York, Ocasio-Cortez “stayed in a luxury apartment in D.C. with a Whole Foods in the lobby."

Ocasio-Cortez, the only Democratic vote against the relief legislation, said in a debate last week that she opposed it because its help for large corporations was a gift “for Donald Trump and his friends." She also said the bill denied benefits to many immigrants. She said the Amazon headquarters plan guaranteed no jobs for district residents and would have cost taxpayers money and boosted rents.

Campaign spokesperson Lauren Hitt said the lawmaker has been in New York and Washington 96% of the time, attending over 200 events in the district.

She said the campaign has helped raise over $1 million to help community groups weather the pandemic, and Ocasio-Cortez has attended two protests in the district against police treatment of African Americans, helping distribute protective masks. She said she remained in Washington for days after the relief bill passed feeling ill but wasn't tested for the coronavirus.

Caruso-Cabrera, 51, has vulnerabilities in the overwhelmingly Democratic district. A registered Republican until several years ago, she's a former CNBC anchor who lived in Trump Tower before moving to the district last year.

Reed said the chamber urged Caruso-Cabrera to run last fall. Ocasio-Cortez is expected to have one of the lowest scores when the chamber releases rankings next week on lawmakers' votes on business-oriented bills.

The organization tangled with Ocasio-Cortez in a Texas primary in March, when she backed an unsuccessful liberal challenger to pro-business Democratic Rep. Henry Cuellar.

This time, Ocasio-Cortez's advantages will be tough to overcome.

Her household name is a major edge, and her Hispanic heritage is a strong suit in her multiracial district. The $8.2 million she’s raised is more than seven times what Caruso-Cabrera has collected.

“Given how she came into office, she should be the last person to take anything for granted, and obviously she’s not,” said Howard Wolfson, a longtime New York Democratic strategist.

In a stunner of a primary two years ago, Ocasio-Cortez ousted Rep. Joe Crowley, who overwhelmingly outspent her and was considered on track to become House speaker. She accused him of being detached from the district, which grew increasingly diverse during his two decades in office. It currently is half Hispanic, with many of the rest Asian and African American.

Since coming to Washington in 2019 with a huge class of first-term lawmakers that gave Democrats the House majority, Ocasio-Cortez has established a marquee niche.

A self-proclaimed democratic socialist, she's an author of the Green New Deal, a plan for curbing planet-warming emissions that's gone nowhere in Congress.

She's pushed other liberal efforts on health care and immigration and has clashed with House Speaker Nancy Pelosi, D-Calif., for defying the party line. Those confrontations have diminished, and Ocasio-Cortez, after campaigning for presidential candidate Bernie Sanders, has now said she'll vote for the party's presumed nominee, Joe Biden.

Much of her clout comes from Twitter, where she has 7.2 million followers. All of this has earned her a cameo in countless Republican ads that depict her, Pelosi and Sanders as dangerous radicals.

“We play to win, but sometimes we play to make a statement," Reed said. If she prevails, he said the chamber would warn anti-business lawmakers that “we're going to keep an eye on them."