NEW YORK - The NYPD has a new police dog in its ranks — and this one doesn't need to eat, sleep, or poop. It is made of circuits and hydraulics.

The department is testing a 70-pound robotic dog that uses "cameras and lights mounted on the device which allow the NYPD to view its surroundings in real-time," Sgt. Jessica McRorie, a police spokesperson, told FOX 5 NY.

Police used the robot to clear a crime scene in the Bronx on Tuesday. Cops deployed the dog during an investigation in the Wakefield section.

The NYPD wouldn't share the details of the operation but confirmed it was part of an active investigation.

"The device deployed today to the inside of an apartment located within the confines of the 47th Precinct as part of an ongoing investigation," McRorie said, "and it was determined there were not any individuals inside of the location."

Digidog used in the Bronx

The NYPD is testing a robotic dog equipped with cameras, lights, and transmitters. It can navigate using artificial intelligence.

The presence of the robot — which is painted blue, black, and yellow and has the label "DIGIDOG" on its side — drew attention from bystanders on the street near the crime scene. Several people pulled out their camera phones to take pictures and videos of the robo-K9-cop in action.

The robot dog, made by Boston Dynamics, can climb stairs, search and examine potentially dangerous areas, and carry a small cargo if needed. It can be equipped with optional gear to perform other tasks such as opening doors, recovering objects, and take measurements.

"This allows the NYPD to have eyes and ears and also talk to individuals in life-threatening situations," says John Jay College professor Keith Taylor say. 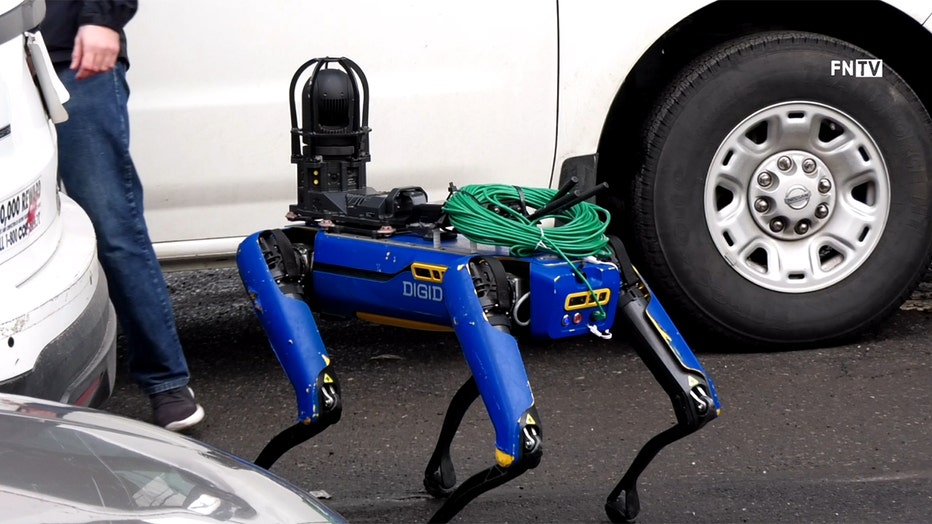