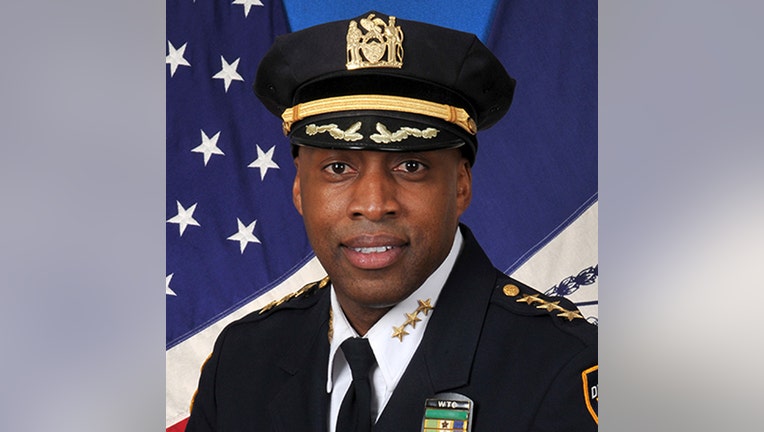 Rodney Harrison is the NYPD's incoming chief of detectives. ( NYPD )

NEW YORK - In a first, the nation's largest police department on Wednesday selected a black chief for its detectives squad as bail reform and other challenges loom.

Harrison, 50, has been a detective, went undercover investigating drug crimes and was shot in the line of duty during an 28-year NYPD career.

He started as a patrol officer in Queens around the time Shea was beginning his NYPD career in the Bronx. He has been the department's chief of patrol for about two years.

In a statement, Harrison said he has long aspired to be chief of detectives.

"He's exactly what we want," said Shea, who led the department's approximately 7,000 detectives before taking over as police commissioner on Dec. 1.

"He's well respected by the men and women that he leads," the new commissioner said. "He's a leader, and he possesses the skills necessary to take us where we want to go."

Shea appointed Fausto Pichardo, a top patrol services bureau deputy, to succeed Harrison as chief of patrol. Pichardo was born in the Dominican Republic and moved to New York City as a child.

Two years ago, he became the first NYPD officer from the Caribbean nation to be promoted to a two-star chief. As chief of patrol, he will wear three stars.

Shea has pledged to diversify the department's leadership.

Mayor Bill de Blasio made clear that was a priority when he selected Shea last month to replace the retiring James O'Neill, telling reporters that "in the next few years, you're going to see a lot of leadership elevated that represent the full diversity of New York City."

Shea said de Blasio did not have any influence over his decision to appoint Harrison or Pichardo. He said he has more personnel announcements planned.

Harrison and Pichardo are moving into new roles as the NYPD prepares for a slew of statewide reforms taking effect Jan. 1.

They include the elimination of bail for non-violent felonies, appearance tickets instead of arrests for low-level offenses and a requirement that authorities give more information to defendants before reaching a plea agreement.

Both men have been instrumental in implementing the department's community-policing strategy, known as neighborhood policing, which pushes officers out of their patrol cars and onto the streets so they can build bonds with residents.

As chief of patrol, the handsome and personable Harrison is perhaps best known to the public for being a face of the department during times of crisis, such as police shootings.

On a lighter note, he has also been the official who monitors the wind and decides if the big balloons can fly at the Macy's Thanksgiving Day Parade.

As chief of detectives, Harrison will be in charge of a unit in transition.

Shea last year oversaw an overhaul of the special victims division, which deals with sex crimes, including the ouster of the chief in charge when Harvey Weinstein was arrested in 2018.

Under new chief Judith Harrison, who is not related to Rodney Harrison, the division has added several dozen more investigators, retrained staff and shifted how rape statistics are reported to the public.

But some victim advocates called for Shea's resignation, saying the changes weren't enough.

"Within the detective bureau, we've had a lot of change in the last year and a half, but I think that Rodney is also going to have a lot of work to do," Shea said.

"There's a lot that I had thoughts of doing that didn't get done yet. How we treat complainants. How we get back to people. Really the basics. But we're not there yet."