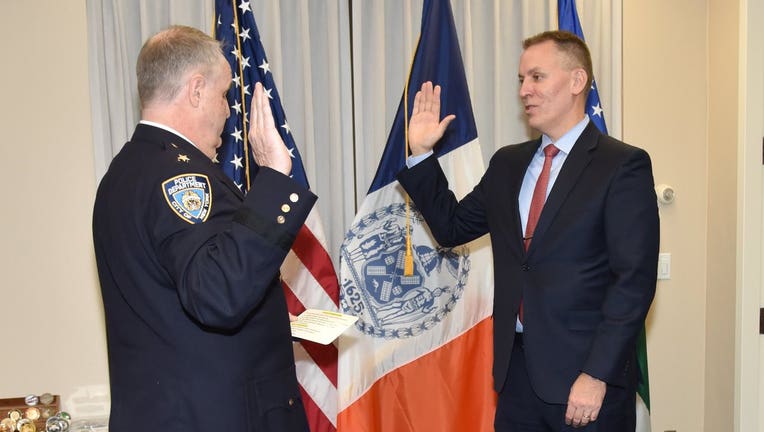 NEW YORK (AP) — Each month, Dermot Shea sits with other top New York City police officials and the mayor to brief reporters on the latest crime statistics. In front of them, often, is a big, blue sign featuring a variation on their underlying message: "Safest Big City in America."

Sworn in Sunday as the city’s 44th police commissioner, Shea now has the ultimate responsibility for keeping it that way. But serious challenges are abound for the new leader of the nation's largest police department.

Shea, who succeeded James O’Neill, will have to contend with looming bail and other criminal justice reforms, pressure to reduce arrests and incarcerations ahead of the planned 2026 closure of the city’s notorious Rikers Island jail complex, and dissent among the department's 36,000 officers.

"The deck is stacked against him," said Joseph Giacalone, a former NYPD sergeant who now teaches at John Jay College of Criminal Justice.

Shea and O'Neill have been raising concerns about the statewide reforms taking effect Jan. 1. Changes include eliminating bail for non-violent felonies, appearance tickets instead of arrests for low-level offenses and a requirement that authorities give more information to defendants before reaching a plea agreement.

Criminal justice advocates say the reforms, amid a widespread shift away from mass incarceration, will bring overdue fairness to a system that has long filled jails with people who are accused of low-level crimes and are unable to afford bail. Law-and-order types fear letting suspects roam free will make the city less safe.

O'Neill, who starts Monday as Visa Inc.'s head of global security, said he's particularly worried that people involved in violent crimes will be let out whenever they get picked up for lesser offenses.

On top of the reforms, a recently approved plan to replace Rikers with four new jails around the city has officials pushing to cut the number of people locked up on a daily basis by more than half, to 3,300 inmates by 2026, from about 7,000 today.

Drastic drops in crime and a shift in the NYPD's approach to minor offenses have already helped slash the city's jail population from a peak of nearly 22,000 in 1991, the year Shea joined the department.

Shea developed data-driven strategies for fighting and preventing crime, and helped O'Neill transition the department to a community-oriented policing philosophy, which pushes officers out of their patrol cars and onto the streets so they can build bonds with residents.

Shea said that approach, known as neighborhood policing, is vital to coping with the shifting criminal justice landscape. Police officers are increasingly focused on drivers of crime, like gangs and drugs, while looking for alternatives to arresting and incarcerating people in many other cases, he said.

In recent years, officers switched to writing tickets for minor offenses instead of making arrests, while some city prosecutors have stopped hauling people into court for small-time marijuana possession. In 2011, there were about 84,000 misdemeanor drug arrests. Last year, there were less than 24,000.

"The blueprint, I think, is here," Shea said. "I think it's time to build on it. There is more work to do for all. We cannot and will not rest until all New Yorkers feel safe."

Shea, the Queens-bred son of Irish immigrants, worked his way up the ranks over a 28-year NYPD career from Bronx patrolman to chief of detectives. Mayor Bill de Blasio said he was dazzled early on by Shea's intellect and saw him as "the future of the NYPD."

Critics, though, pointed to a lack of transparency in the selection process and a continued lack of diversity in the department's upper management. O'Neill's second-in-command, Benjamin Tucker, who is black, said he was disappointed not to get the job.

Aside from criminal justice reforms, Shea must also navigate strained relationships with the police unions and lingering community resentment over how officers are disciplined and what information the department shares with the public.

The city's largest police union accused department leadership of abandoning officers amid a wave of attacks on police with everything from water to a metal chair. In August, the union called on O'Neill to resign after firing an officer for the 2014 chokehold death of Eric Garner.

A spate of officer suicides this year led O'Neill to declare a mental health crisis and to criticism that the department had not done enough to help officers in need. The deaths of two officers in separate friendly fire incidents prompted questions about how the department trains officers to deal with such scenarios.

The biggest factor in Shea's success or failure, though, will be the crime stats, Giacalone said.

New York City has seen vast drops in crime over the last three decades. Last year, there were 295 homicides in New York City — less than other smaller cities like Chicago and Philadelphia, and a far cry from the 2,154 the city had in 1991.

Recently though, numbers in some crime categories have ticked upward, and a pair of quadruple killings in October, along with attacks on senior citizens and a melee last week that left four men cut up near Times Square, have some people fearing a return of the bad old days.

If crime jumps substantially and the signs at the monthly briefings no longer ring true, it'll be Shea who gets blamed, regardless of what's actually driving it, Giacalone said.

"It's like a musical chair game of crime stats. Nobody wants to be without a chair when the music stops," Giacalone said. "Nobody wants to be there when this thing goes to pot, and that's the way it's looking."