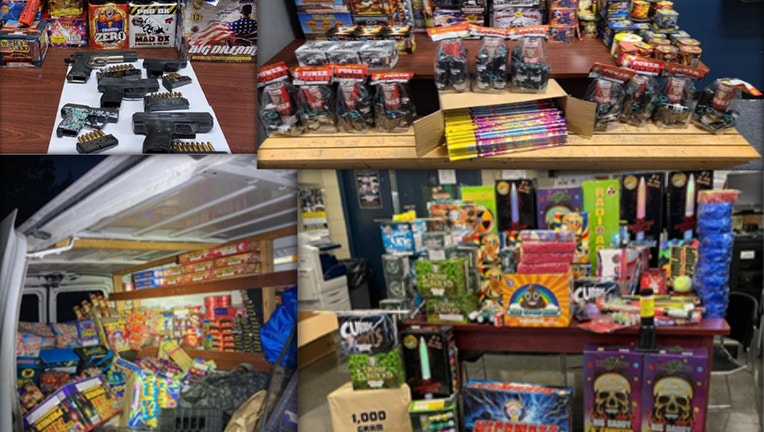 NEW YORK - The NYPD announced Saturday that it made 22 arrests and pulled $54,000 worth of illegal fireworks and six illegal handguns off the street in the run-up to Independence Day.

Nearly half of those arrested in the operations live in Brooklyn and five of the suspects have a record of at least ten prior arrests, including two individuals with 42 and 33 prior arrests, respectively.

In one of the operations, NYPD investigators developed information on individuals believed to be trafficking large amounts of illegal fireworks in New York City. The operation resulted in 15 firework-related arrests and the confiscation of roughly $22,000 in illegal fireworks.

In a separate operation looking into the sale of illegal fireworks via Craigslist, NYPD officers identified and arrested an individual in Brooklyn and also managed to uncover and confiscate roughly $15,000 in fireworks.

RELATED: NYPD stepping up security for Macy's fireworks, cracking down on drunk driving

In the third and final operation, Field Intelligence Teams worked with the community to make six fireworks-related arrests and seizures, leading to the confiscation of $7,800 in fireworks and six illegal firearms, along with other contraband.

"The NYPD’s Intelligence Bureau has been an integral part of a Task Force working with the Sheriff and Fire Marshals to develop information on major suppliers, interdict illegal fireworks as they come into New York City from out of state distributors, target locations where they are stored before sale — creating a hazard of fire and explosion — and the sellers who peddle illegal fireworks that result in multiple serious injuries to adults and too often children, every summer in New York City," said Police Commissioner Dermot Shea. "These arrests and seizures to date demonstrate our focused, unrelenting commitment to that mission."

All of the suspects arrested were males, with the majority in their 20s and 30s. The arrested ranged from first-time offenders to individuals with significant prior arrest records. Many of the suspects had been arrested for violent felony offenses, including eleven for weapons possession and one individual who had been convicted of assaulting a police officer and another arrested for attempted murder.