A Black Lives Matter street sign of 28-foot tall letters in bright, yellow were painted along Fulton Street and Restoration Plaza in Bedford-Stuyvesant.

NEW YORK - The first of five street murals planned for New York City in support of Black Lives Matter was painted in Brooklyn. The 28-foot tall letters in bright, yellow were painted along Fulton Street and Restoration Plaza in Bedford-Stuyvesant.

New York City plans to co-name and paint one street in each borough 'Black Lives Matter,' to commemorate the movement that intensified following the death of George Floyd.

The mayor's office and the City Council will work to select the streets. Community activists will be brought in to help paint them.

"The streets of our city will now affirm the vital work activists have done to bring us forward," said Mayor Bill de Blasio. "With a street in every borough painted with the words Black Lives Matter, we are recognizing where we have been and looking forward to where we will go."

The first sign will go up and panting will occur in Manhattan near City Hall. The other four locations will be determined in conjunction with the City Council.

"Renaming and repainting a street is a modest testament to the massive challenge ahead of us," said Manhattan Borough President Gale A. Brewer. "But in so doing we will, literally, set down a marker for our current goals and mark this era for future generations. I'm a history buff; as New Yorkers and visitors walk downtown past some of America's most historic landmarks, 'Black Lives Matter Way' will add to that history." 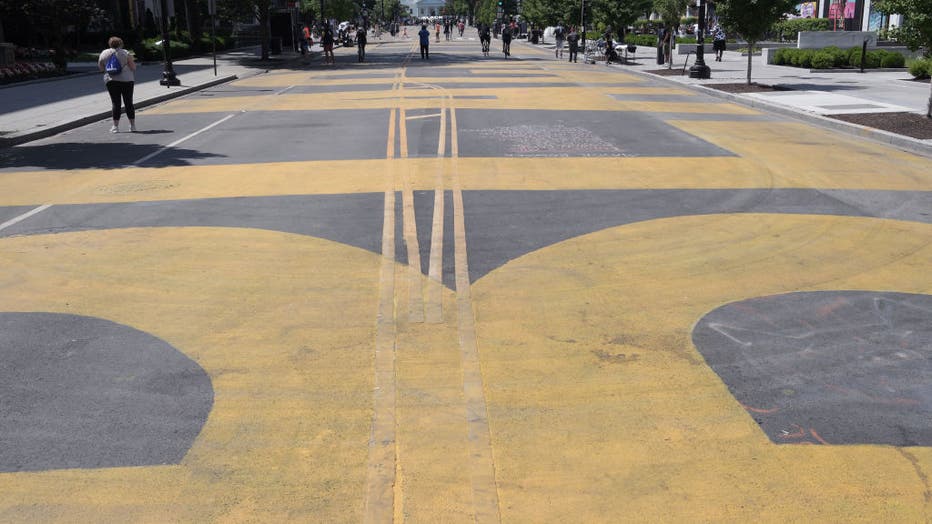 The area of Lafayette Park on June 09, 2020 in Washington DC, USA. (Photo by Lenin Nolly/NurPhoto via Getty Images)

"I thank the Mayor for taking this action," said Council Member Chin. "We need to continue to take down monuments of racism and replace them with unequivocal affirmations of racial justice and commitment to fighting for reforms that value and protect Black lives. Located in the heart of New York City's Civic Center, this sign is a permanent reminder for elected officials, workers, visitors, and residents that this is more than just a rallying call, it's a movement that requires our continued solidarity and full support."

Floyd was laid to rest Tuesday in his hometown of Houston, Texas. His death sparked intense protests and calls for the reform of police departments across the country to end police brutality. 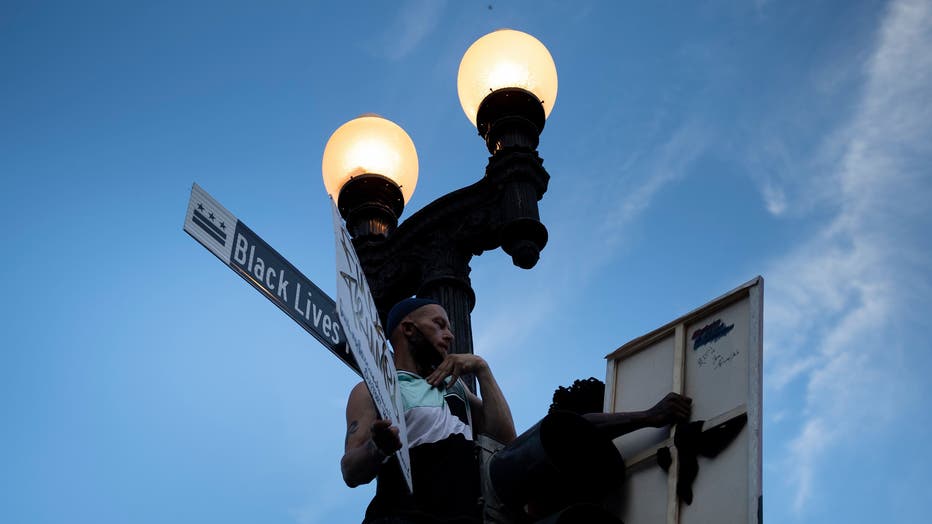 Protesters stand on a light post on 16th Street NW in front of the White House which was renamed Black Lives Matter Plaza as protests over the death of George Floyd continue June 9, 2020, in Washington, DC. (Photo by BRENDAN SMIALOWSKI/AFP via Getty