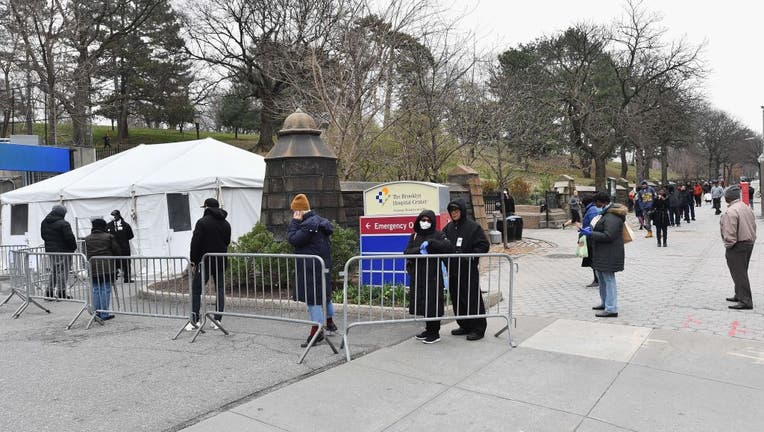 People who believe they have COVID-19 and who meet the criteria wait in line to be pre-screened for the corona virus outside of the Brooklyn Hospital Center on March 20, 2020 in the Brooklyn borough of New York. (Photo by Angela Weiss / AFP) (Photo b

In an advisory issued Friday, the health department said outpatient testing should stop unless results would impact treatment for the patient.

“Persons with COVID-like illness not requiring hospitalization should be instructed to stay home. It is safer for the patients and health care workers,” the advisory said.

It said demand for unnecessary testing is contributing to a national shortage of masks, gowns, collection swabs and other supplies, all of which need to be discarded by health care workers after each test.

The order came amid a huge surge in testing in New York. After a slow start, testing sites have proliferated, and many officials have said that widespread testing is a key to fighting the spread of the disease.

As of Friday morning, more than 32,000 people had been tested in the state, almost a third of them in the last day, Gov. Andrew Cuomo said.

More than 7,000 New Yorkers have tested positive. More than 1,200 have been hospitalized.

In announcing the state now has 7,102 confirmed cases, New York Gov. Andrew Cuomo laid out strict rules for people most likely to be susceptible to the coronavirus.

Similar restrictions on testing have been implemented in other parts of the state.

“The difficult decision was made in order to conserve testing resources for those at highest risk, including inpatients, symptomatic direct care workers and those with high-risk exposure to the virus,” according to a release.