A top police official said the NYPD will not tolerate the use of illegal dirtbikes, ATVs, motorbikes and more on the streets. Chief of Transportation Kim Royster said urged anyone with information about the person who drove a motorbike into a 4-year-old in Queens to come forward.

NEW YORK - Illegal motorcycles, dirtbikes, and ATVs have become a big problem in New York City, so much so that Democratic mayoral nominee Eric Adams has described it as a sign of things slipping out of control.

These problems were highlighted in a tragic case this weekend when a hit-and-run driver struck and critically injured a 4-year-old boy in a park in Queens. The NYPD is now asking for help from the public to catch the suspect.

The incident happened Sunday afternoon. The boy was badly hurt when what police describe as a "two-wheel motorized device" slammed into him. It is unclear if it was a dirtbike or a motorcycle or something else.

The boy was in the Meadow Lake Trail parking lot of Flushing Meadows-Corona Park.

Investigators say the driver was speeding in between cars nearby just before slamming into the boy and then speeding off.

The NYPD is urging anyone who may have seen something to come forward to help find the suspect.

"No parent should have to endure such a senseless act," NYPD Chief of Transportation Kim Royster said. 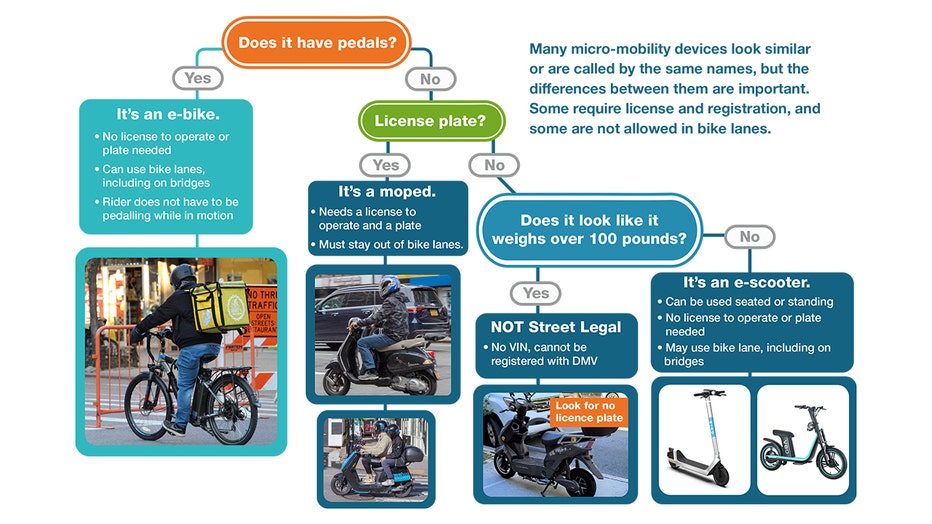 The NYPD released this flowchart showing the distinctions among different small vehicles, many of which are electric-powered. (Via NYPD)

Police are looking for the motorcyclist who struck a boy in Queens and fled.