The restaurant Brik Astoria in Queens was suspended from the city's open restaurants program after large crowds gathered outside of it this weekend, violating social distancing guidelines.

NEW YORK - A day after calling the crowded scene outside the Brik Astoria restaurant in Astoria, Queens “unacceptable,” Mayor Bill de Blasio has now suspended the Steinway Street bar and eatery from participating in the city’s Open Restaurants program for one week.

The move makes Brik Astoria the only restaurant punished so far, of the 8,700 businesses along 40 roadways allowed to expand their sidewalk seating into the streets as the city moves into Phase Four of its reopening.

"Some of the people came to our business but a lot of the people didn't, because it's literally impossible to serve all those people," said Ionnis Zorbas, the owner of Brik Astoria. "And when I walked out Friday night, you know what I saw? I saw someone selling liquor out of a car. What am I supposed to do?"

For several weeks, people have been flooding Steinway Street after dark, ignoring social distancing orders and partying well past the city’s 10 p.m. shutdown rules, with 3-1-1 fielding over 100 complaints from neighbors even before Friday night’s scene got Mayor De Blasio’s attention on Twitter. 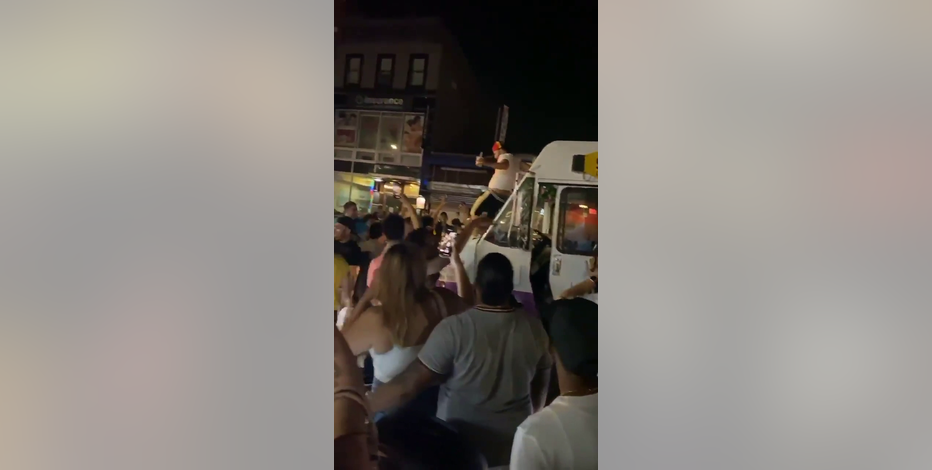 Neighborhood volunteers were out cleaning up the mess left by revelers on Saturday morning and the NYPD was on scene that evening to hand out 5,000 face masks and remind those gathered to keep their distance as night fell.

Now, the Department of Transportation has sent Brik’s owner a letter ordering he remove all street seating elements or face a $1,000 fine. The restaurant now has seven days to submit a social distancing compliance plan.

"I just hope we can figure out a solution, something that works out for both of us, not that just impacts us but works for everybody as far as the city, our neighbors, and trying to make sure we don't spread the coronavirus. That's what this really comes down to," Zorbas said.

Steinway Street hasn't been the only crowded nightlife spot in the city recently, but so far, no other restaurant has been sanctioned.

Gov. Andrew Cuomo said that local officials have to do more to stop residents from doing dangerous activities amid the pandemic. He threatened to roll back reopenings.