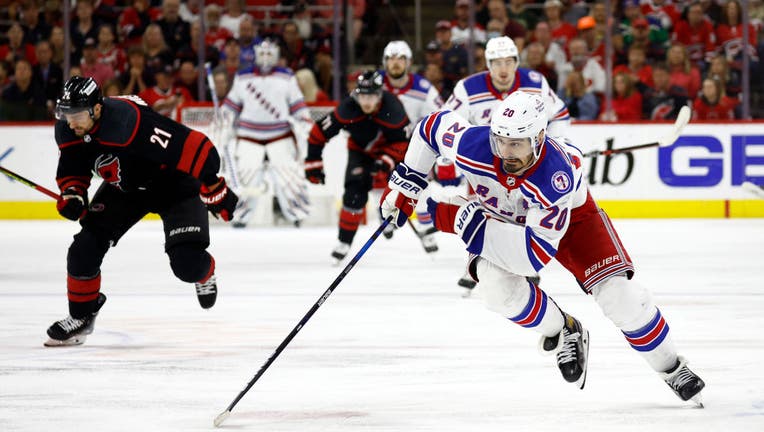 RALEIGH, NORTH CAROLINA - MAY 30: Chris Kreider #20 of the New York Rangers skates the ice during the third period in Game Seven of the Second Round of the 2022 Stanley Cup Playoffs against the Carolina Hurricanes at PNC Arena on May 30, 2022 in Rale

NEW YORK - Nothing is fazing these New York Rangers, not multi-game series deficit nor playing in a building where no road team has won in the Stanley Cup playoffs.

Instead, this resilient bunch is carrying an ever-growing confidence straight into the Eastern Conference finals, thanks to another Game 7 win and the latest strong performance from possibly the game's best goaltender.

Kreider and Adam Fox had first-period power-play goals as the Rangers raced to a quick lead. The Rangers then rode Shesterkin’s latest offense-stymieing performance to win a fifth straight elimination game win in these playoffs.

"Backs against the wall five times now," Fox said, "and we've come through all five."

Shesterkin — a finalist for both the Vezina Trophy for the league’s top goalie and Hart Trophy for most valuable player — finished with 36 saves and carried the shutout well into the third period.

Now the Rangers are off to a conference final for the first time since 2015, earning a matchup with two-time defending Stanley Cup champion Tampa Bay. New York will host Game 1 of that series Wednesday night.

A 12-year-old hockey player from New Jersey is back on the ice after battling cancer, and he was able to beat the disease with the support of some of the sports' biggest stars.

Ryan Strome and Filip Chytil also scored in what became an unexpected rout, with Andrew Copp adding a late empty-netter. More impressively, the Rangers’ win came in an arena where the Hurricanes had gone 7-0 in the playoffs, including a Game 7 victory to beat Boston in the first round and three meetings in this series.

New York coach Gerard Gallant said Sunday he had a group of players who "have a lot of fun and they believe in themselves." They looked as if they were doing plenty of both Monday in capping a second straight comeback win from a multi-game deficit.

First, they rallied from a 3-1 down to beat Pittsburgh in a seven-game series. Then, after falling in an 0-2 hole against Carolina, New York responded with more resilience, even a stubborn refusal to fade out when down.

Kreider went as far as to throw in a comparison to "cockroaches."

There were no questions about that Monday night, particularly with Shesterkin holding up against 17 first-period shots. That included one stop from flat on his back on Sebastian Aho near the right post, with Shesterkin snagging the puck between his legs flailing, as if trying to make a snow angel late in the first period.

The Rangers also helped by blocking 25 shots in front of him.

"You've got to pay a price to win games in this league, especially against real good teams like that," Gallant said. " I love the way our guys are competing and battling. I've said 100 times this year, we're not perfect but we find ways to win."

Vincent Trocheck finally beat Shesterkin with a deflection on a Tony DeAngelo shot midway through the third period, only to see the Rangers follow with Chytil’s goal just 40 seconds later to push the margin to 5-1.

Max Domi also scored a late goal for the Hurricanes.

But Carolina lost top-line rookie forward Seth Jarvis to a first-period injury after a jarring high hit from Jacob Trouba, and then lost goaltender Antti Raanta to an apparent right-leg injury in the second period in an all-around rough night. Raanta had 16 saves before his injury, while rookie Pyotr Kochetkov allowed three goals on 12 shots in relief.

"Tonight was kind of just some bounces, everyone wasn't quite there, including myself," Carolina captain Jordan Staal said. "An unfortunate way to end the series — season." 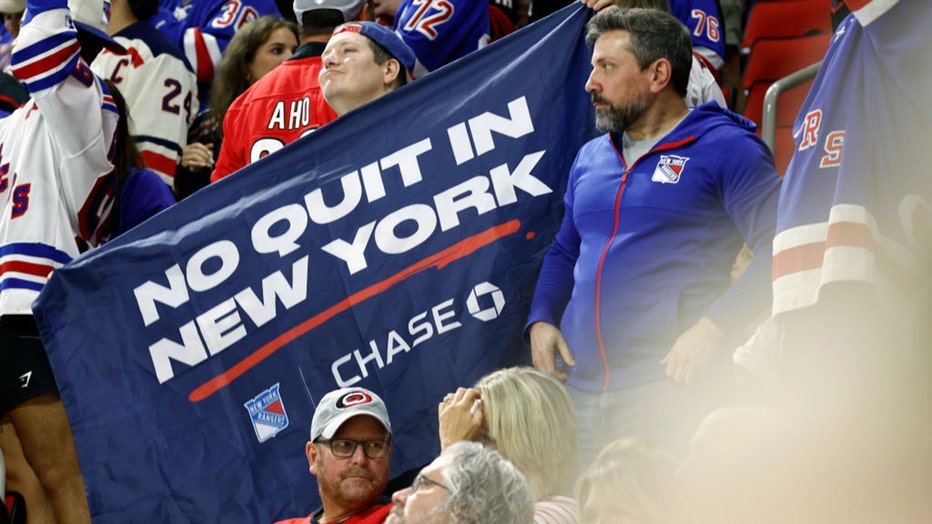 RALEIGH, NORTH CAROLINA - MAY 30: New York Rangers fans cheer during the third period in Game Seven of the Second Round of the 2022 Stanley Cup Playoffs against the Carolina Hurricanes at PNC Arena on May 30, 2022 in Raleigh, North Carolina. (Photo b

Carolina’s playoff success had leaned on its home-ice advantage, backed by a rowdy crowd. But its inability to win a single road game in the postseason only shrunk the Hurricanes' margin for error and turned winning at home into an absolute necessity to keep playing.

As a result, the first and only home stumble proved fatal, a crushing end to a season that saw the division winner, with the third-best record in the NHL, set franchise records for regular-season wins (54) and points (116) with aspirations of winning its second Cup.

"It’s definitely a bummer to have the team — the caliber of team — that we did," Carolina defenseman Jaccob Slavin said, "and not go farther."

The Hurricanes were 6-0 in Game 7s since the former Hartford Whalers relocated to North Carolina in 1997. They were trying to become the first team in NHL history to win seven straight Game 7s.

Carolina was also trying to become the first to win multiple best-of-seven series in the same postseason with zero road wins.

When Fox scored and assisted on Kreider's first goal, that pushed him to 10 points in elimination games during this postseason.

According to ESPN Stats & Info, that marks the most by a defenseman in a single postseason, surpassing Ray Bourque in 1980, Ian Turnbull in 1976 and Denis Potvin in 1975.

Jarvis was knocked from the game on Trouba's hit, which sent him sprawling to the ice and left him able only to crawl back to the bench. When he made it there, he was too wobbly to sit on the bench and needed assistance from teammates to get directed into the locker room.

Making matters worse, the Hurricanes took a penalty for too many men on the ice while trying to sub for Jarvis, leading to Kreider's first goal.

Ranta went down with 4:23 left in the second period when he extended his right leg in a split to make a stop on Mika Zibanejad. He almost went forward and landed face down on the ice. He was eventually helped off the ice by teammates Vincent Trocheck and Nino Niederreiter, not putting any weight on his right leg.

Afterward, coach Rod Brind'Amour said Raanta's injury would have prevented him from playing the next series, had Carolina won.