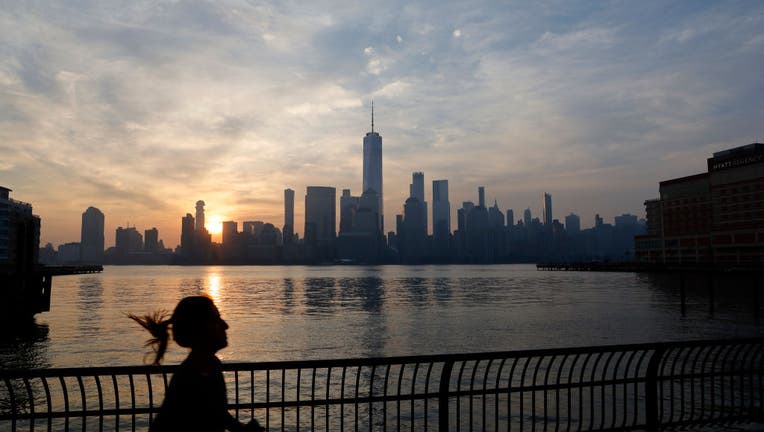 A woman runs along the Hudson River in front of lower Manhattan and One World Trade Center as the sun rises in New York City on September 25, 2020 in Jersey City, New Jersey. (Photo by Gary Hershorn/Getty Images)

ALBANY, N.Y. (AP) - More than 1,000 New Yorkers tested positive for COVID-19 in a single day Friday, marking the first time since June 5 the state has seen a daily number that high.

The number of positive tests reported daily in the state has been steadily inching up in recent weeks, a trend possibly related to increasing numbers of businesses reopening, college campuses reopening and children returning to school. Gov. Andrew Cuomo announced Saturday there were 1,005 positive cases tallied on the previous day out of 99,953 tests, for a 1% positive rate.

From late July through the start of September the state was seeing an average of around 660 people test positive per day. In the seven-day period that ended Friday, the state had averaged 817 positive tests per day.

Cuomo aide Gareth Rhodes stressed Saturday that the new positive-case number came out of nearly 100,000 tests, compared to about 60,000 tests daily in June.

“Is there cause for concern? As long as COVID is here, yes,” Rhodes posted on Twitter, noting that certain ZIP codes in Brooklyn and the lower Hudson Valley have seen increases in new cases and hospital admissions. "Key is ensuring these clusters don’t spread into neighboring/other ZIPs.”

That number of daily positive tests in a state of more than 19 million people still puts New York in a much better position than many other states. Florida, for instance, reported 2,795 new confirmed cases of COVID-19.

And New York is in a far better situation than in April, when the number of positive tests per day routinely topped 9,000, even though tests then were hard to get and people were being encouraged not to seek one unless they were gravely ill.

Still, the uptick has been a cause for concern. In New York City, health officials have sounded alarms about a rising number of cases in certain neighborhoods in Brooklyn and Queens where many private religious schools opened for in-person instruction in early September, warning that those communities could see severe restrictions on public gatherings reinstated if current trends continue.

Associated Press journalist David B. Caruso contributed to this report.