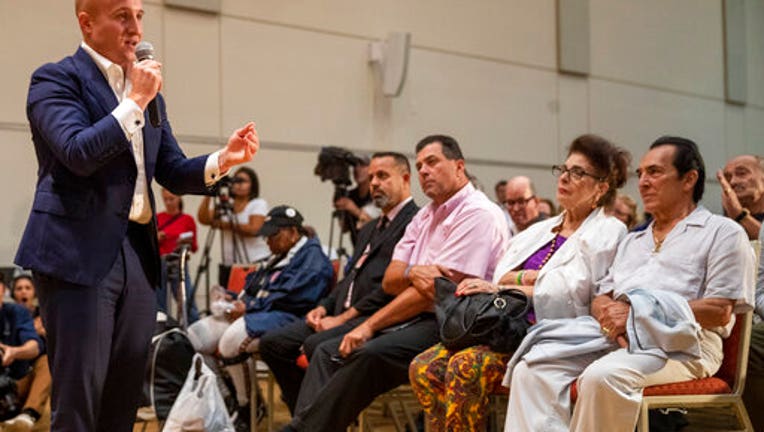 NEW YORK (AP) — A Democratic congressman from New York who had not backed the impeachment inquiry against Republican President Donald Trump said Wednesday that he now supports the inquiry.

Rep. Max Rose of the New York City borough of Staten Island said he intends to “fully support the impeachment inquiry and follow the facts.” The first-term congressman who toppled a Republican incumbent had not previously expressed support for the inquiry announced last week by House Speaker Nancy Pelosi.

Rose told constituents at a town hall meeting that “the American people have a right to know if their president used the power of his or her office to get a foreign power to interfere in our election.”

Trump has denied any wrongdoing.

The district, which includes all of Staten Island and a slice of Brooklyn, is the only Congressional District in New York City that backed Trump in 2016. It is much whiter than the city as a whole and is home to many firefighters and police officers.

Rose has positioned himself as a pragmatic moderate since his upset victory, fulfilling a campaign promise to vote against Nancy Pelosi for House speaker and focusing on local issues like transportation and fighting opioid abuse.

He had declined to support Pelosi’s call for a formal impeachment inquiry over allegations that Trump pressured the president of Ukraine to investigate former Vice President Joe Biden, a leading Democratic presidential contender, and Biden’s son, Hunter.

Rose had sought to thread the needle on impeachment in his public statements.

He called the Trump administration “one of the most corrupt in history” in a Sept. 12 op-ed published before a whistleblower’s revelations prompted Pelosi to act.

Still, he said, impeachment “will only tear our country further apart and we will see no progress on the enormous challenges we face as a nation.”

Rose said on Sept. 24 that he “opposed a partisan impeachment process” but added, “This is a serious crisis, all options must be on the table, and it's time Republicans are as interested in the truth as the American people.” He said in another statement Friday, “Under no circumstances will I allow politics to influence my decision regarding this matter.”

State Assemblywoman Nicole Malliotakis, a leading contender to be Rose’s Republican opponent in November 2020, said Rose “caved” to pressure to support the inquiry.

"Just one day after finding out he had a challenger in the Democrat primary, Congressman Max Rose caved to socialists Reps. Alexandria Ocasio Cortez, Ilhan Omar and Nancy Pelosi in the rush to impeach President Donald Trump,” she said. “It just shows that when pressure is applied, Max Rose stands with the radical left instead of Staten Island."

Rose denied that the prospect of a primary opponent was a factor in his impeachment decision, and he offered a message to some of his Republican colleagues.

"There are 19 Republicans in the United States Congress who sit in congressional districts that Donald Trump won by less than he won in this congressional district," Rose said. "Today we call on them to show some semblance of courage, to take a political risk and to join in support for this impeachment inquiry. Let's get to the facts and let's do it in a fair and open manner."