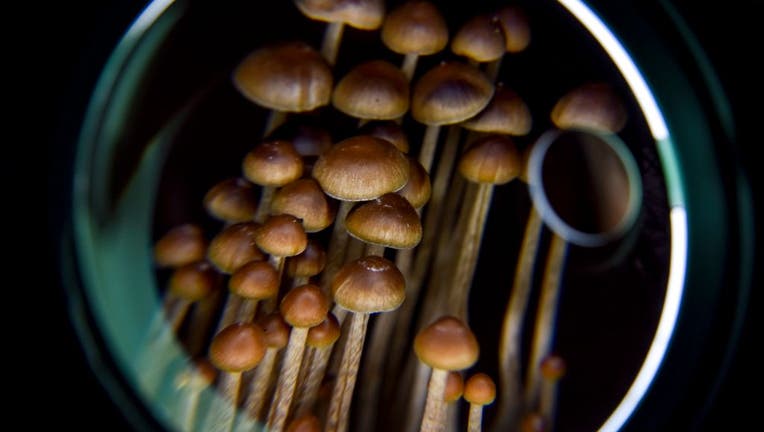 A DC resident has an operation growing psilocybin mushrooms, including this Galindoi variation of Psilocybe mexicana mushrooms, in Washington, DC, on Monday, February 5, 2020. (Photo by Jahi Chikwendiu/The Washington Post via Getty Images)

NEW YORK - Lawmakers in New York are considering several bills that would change the legal status of psychedelic drugs like psilocybin in New York.

Psilocybin is a naturally occurring psychedelic drug made by over 200 species of fungi. It is currently considered a Schedule I controlled substance under federal law, but activists say emerging research shows many potential medical uses for the drug.

Assemblymember Linda Rosenthal is sponsoring two bills, one of which would create a "psychedelic research institute" and a program for researching therapeutic use of psychedelic substances in order to treat addiction, depression, PTSD, end-of-life anxiety, and other issues.

The other bill would broadly decriminalize the use of psilocybin.

"With the opportunity to positively affect the lives of millions suffering with mental health and addiction issues, this bill will decriminalize psilocybin and allow further research into the study of the drug and its beneficial uses for treatment," Rosenthal said.

Meanwhile, Assemblymember Pat Burke is sponsoring a bill that would legalize the medical use of psilocybin. If passed, medical professionals would be able to get training to administer psilocybin therapy as a treatment option.

"The FDA recognizes psilocybin therapy as substantially better than present treatment options. Establishing a widespread route to provide New Yorkers with this medical treatment would be a monumental step forward in providing mental health care to improve lives," Burke said.

Both lawmakers spoke about their proposals at a virtual symposium last month, along with other activists in the movement to decriminalize psilocybin.

Both bills have been referred to committee but have not been scheduled for hearings or votes.

As marijuana legalization has come to states across the U.S., attitudes towards psilocybin and other psychedelics have begun to change as well.

In 2018, the FDA designated psilocybin as a "breakthrough therapy for treatment-resistant depression," and in November 2020, Oregon became the first state in the nation to permit the use of psychedelics for therapeutic purposes.

Bills to study the therapeutic potential of psychedelic drugs have been proposed in Connecticut, Utah, Hawai'i, and Pennsylvania, and several other states.